The CHAMPION OF WOMENS RIGHTS!!!!
The NEXT POTUS!!!
The man who has EVERY SINGLE MEDIA OUTLET kissing his ass....ARRESTED!!!!

Michael Avenatti, who became famous for representing Stormy Daniels in her battle with President Trump, has been arrested for felony domestic violence ... law enforcement sources tell TMZ. Our law enforcement sources say Avenatti was arrested Wednesday after his estranged wife filed a felony DV report. We're told her face was "swollen and bruised." Our sources say the alleged incident occurred Tuesday, but there was a confrontation Wednesday between the two at an exclusive apartment building in the Century City area of L.A.

Sorry for the caps but I wanted to be as brash as this tool. What a dirtbag. From the sound of it she took the brunt of a beating. Then....he tried to say she hit him first.

We're told security brought her inside the building and Michael showed up 5 minutes later, ran into the building, chasing after her. He screamed repeatedly, "She hit me first." We're told he angrily added, "This is bulls***, this is f***ing bulls***."

So you're telling me the champions of the left are guilty of what they accuse the right of? Color me shocked.

I bet he is crying like the little bitch he is....time to check the Smoking gun...

oohhhh....got that in quick for some stars didn't ya?

Here, you have a women with bruising and an arrest. None of the things that occurred with the SCOTUS nominee and...where ARE all those people who came forward? I know quite a few recanted but just what happened? Disappeared like the Trump accusers..all with NO evidence.
edit on Novpm30pmf0000002018-11-14T17:21:19-06:000519 by matafuchs because: (no reason given)

oohhhh....got that in quick for some stars didn't ya?


Yeah, because it's the first time we've seen it. Right?

posted on Nov, 14 2018 @ 05:19 PM
link
They say anyone who handles their own defense has a fool for an attorney and an idiot for a client. I suppose that means Avenatti will be representing himself.

So this is how justice feels...

Seen what? A democrat beat his spouse or girlfriend? Hmmm....a few other people come to mind. Like Keith Ellison.

Seen what? A democrat beat his spouse or girlfriend? Hmmm....a few other people come to mind. Like Keith Ellison.


Seen the left blame the right for what they themselves are guilty of. Off the top of my head here... Um... The KKK, "collusion", fascism, racism, the list goes on.

So I'll just add this:

Cue all of the lefties saying "they never liked him" / 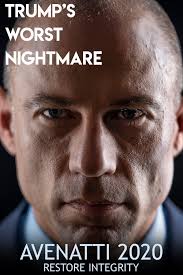 Hahahaha...I think I misread your post and went on a sarcastic trip with ya.....Be Happy!!!! LOL

Obama and Bush came before Clinton...are you confused?

So far it's Avenaitti who is facing huge unpaid tax bills, millions in unpaid fees to partners and now arrested for abusing women.

I do hope he's clutching his ankles in prison.

Sad you're happy someone got hurt just because they represented someone who the president paid off to keep quiet...

To be honest, I was a little confused but played along.