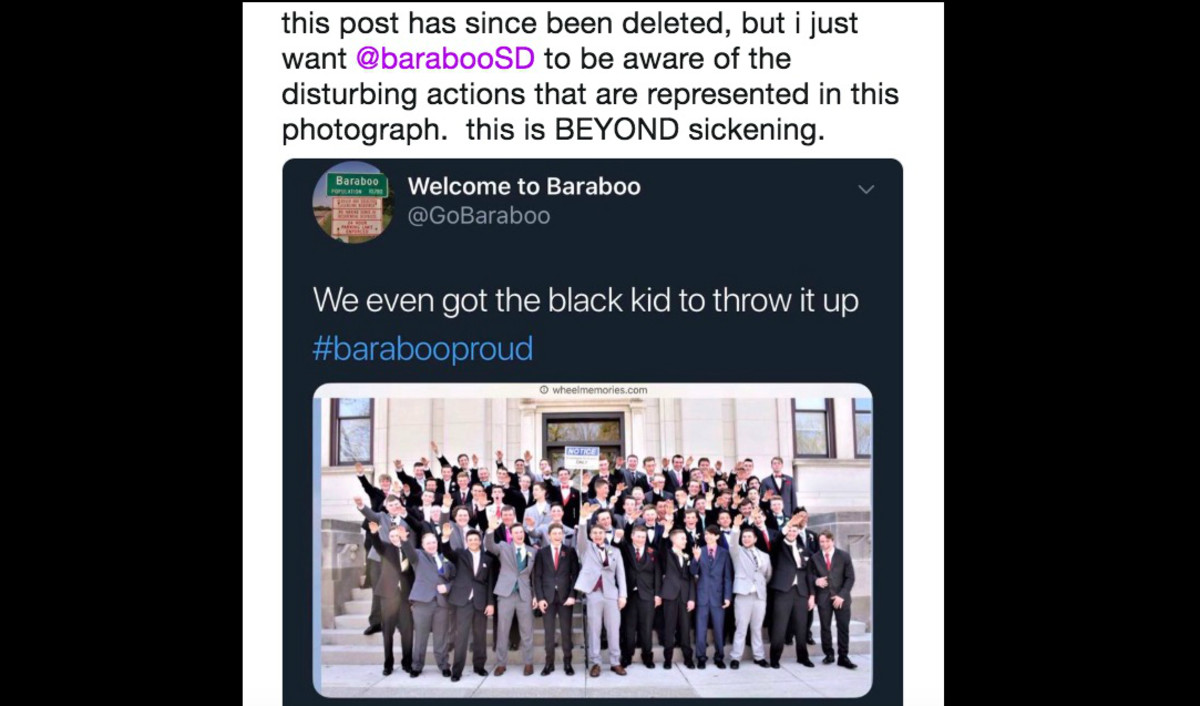 And a few more links to the story:


ETA: I can't fix these links. They're typed correctly but the site does something to them. :shrug:
edit on 12-11-2018 by Mahogany because: (no reason given)

originally posted by: ladyinwaiting
I don't know. See the looks on their faces; they are all cracking up with laughter. Whatever it is, it appears to be a great joke.

True... there could've also been a photo taken seconds earlier or later of everyone doing the Cam Newton Dab, but the photo of the 4th reich is just so much more sensational

Give them a talking to then let it drop.


It's an opportunity....
for parents to step in.

Unless of course, we're already assuming their parents are Nazi's too...

originally posted by: Mahogany
a reply to: JAGStorm

That kid just looks stoned. He probably missed the salute by a second.

Or maybe he's not a lemming.

What about the other 59?

My apologies I stand corrected, Those little punks!! and like you said lemmings.... shame shame shame!!! 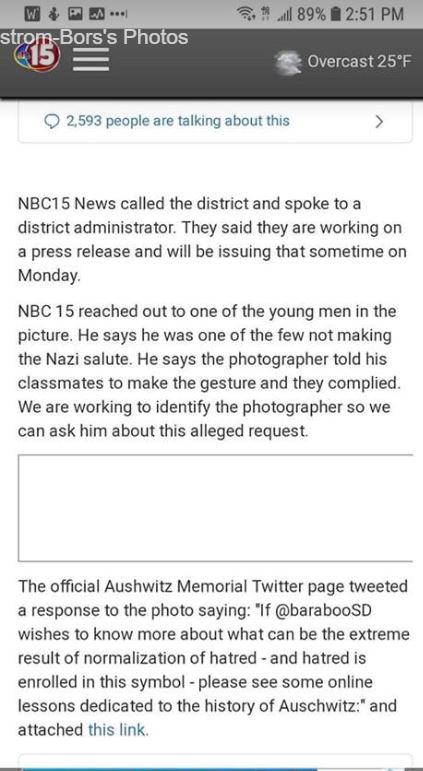 
It's an opportunity....
for parents to step in.

Unless of course, we're already assuming their parents are Nazi's too...


A week before the Nov. 6 midterm election, a flyer with the header “WHITE LIVES MATTER,” was illegally distributed in mailboxes in Baraboo, Reedsburg and Spring Green. Fliers also were placed on vehicles in Wisconsin Dells.

The single-page flyer listed links to several websites promoting nationalist and anti-Semitic views. The Baraboo postmaster said at the time the office was aware of the flyers and carriers were removing them.

They should make those kids watch the film they showed us in 5th grade. My little classmates were leaving the room and some were throwing up.
Others couldn't accept that the people in the photo's were real humans.

Nothing funny about it. Parents need to get them off line. I've been thinking for a while now, people are being radicalized on line.

posted on Nov, 12 2018 @ 03:07 PM
link
Look, I understand that the recent midterm elections have officially brought out the Left in full swing (especially as evidenced here on ATS, as there were people that have been dormant for months/years that came out of nowhere to put up a last minute Right-Smear prior to the Election - and then not a word since) but come on.

The dude in front is playing the circle game, and you know it, so just stop. Considering half the people were laughing in the pic - and by the fact that nobody held torch-lit rallies that night, went around lynching people or burning crosses in the area - it's pretty safe to say this was a bunch of dumb kids doing something silly.

That's right - I said dumb kids doing something silly. Regardless of who's feelz got hurt, nobody was injured, harmed, maimed, killed, assaulted, etc.

Anyway, carry on with your "death and dread, Nazis and white supremacists are lurking everywhere" stuff.

originally posted by: AugustusMasonicus
a reply to: Stormdancer777


You getting some to look at the 'okay' symbol you're making because your three fingers mean 'A.S.S' and the hole formed by the thumb and pointer are the hole.

Get it? This is comedy gold.

So after they do the okay, why do the do the nazi salute?

On the Contrary, it was a game LLLLOOOOONNNNGGGGGG before the left started saying it was white supremacist mumbo jumbo.

I'm local and from what i'm hearing the Photographer asked the kids to do the salute.

Kinda goes to show that if forgotten history can repeat itself. I'm not saying these kids are Nazi, I'm just saying how important unrevised history is!


You don't, one has nothing to do with the other. Nazi salutes are for Nazis, doing the 'okay' is for making your friends look like assholes.


it's pretty safe to say this was a bunch of dumb kids doing something silly.

I don't think it's safe to make that assumption.


I think it's odd that anyone is trying to play this down. Why do so?


Anyway, carry on with your "death and dread, Nazis and white supremacists are lurking everywhere" stuff.

posted on Nov, 12 2018 @ 03:11 PM
link
So f**kin what if they are doing a sieg heil ? It's obviously a joke and doesn't make them "nazis" or racists. Want to know the easiest way to make a kid do something offensive? Tell them that it's offensive and they shouldn't do it.

And now a "White Lives Matter" is "White Nationalist Propaganda"?

There is zero evidence for that, other than the word "White" being used (which apparently ruffles some jimmies for some goofballs)

Good to know, I'll keep that in mind for future talking points.

Nationalism is a political, social, and economic system characterized by the promotion of the interests of a particular nation, especially with the aim of gaining and maintaining sovereignty (self-governance) over the homeland. The political ideologyof nationalism holds that a nation should govern itself, free from outside interference and is linked to the concept of self-determination

The above is the definition of Nationalism. It has nothing to do with racism and Hitler may have considered himself a Nationalist but attempted to take over the world, not exactly Nationalism. The definition continues by describing the goals of a Nationalist, preserving the culture, language, politics, and the common ancestry shared. We see this everyday amoung all countries, watch the Nationalism in the refugee caravan currently in route to the US.

They hold the flags of the countries they are leaving, after they arrive they in many ways work to preserve the culture they left behind, thru a common language, customs, foods, and by teaching their children about all of it. Many adopt the myriad if Nationalist cultures we share here in the US. Many we have adopted into the melting pot that America is. Nationalism is not racist, bad, dirty, nor is it in any way akin to Nazism.

Whatever these young men were attempting to put on display was wrong and misguided. Hopefully they have learned a lesson and work towards educating themselves on the historical implication of the salute they perhaps are parodying, I don't know. The OK symbol, really ? This was a internet hoax to have an everyday symbol associated with racism, it was perpetuated by people laughing at some who shout racism about everything, it is not some secret white power symbolism.

Who cares...if this is what keeps you up at night your life must suck...

Hot damn...Who knew?
Must have a few too many card-carrying members if they can distribute in 3-4 separate towns!!!

Your Bararoo source wants me to sign up to view the article
edit on 5215x6752America/ChicagovAmerica/Chicago11 by six67seven because: (no reason given)