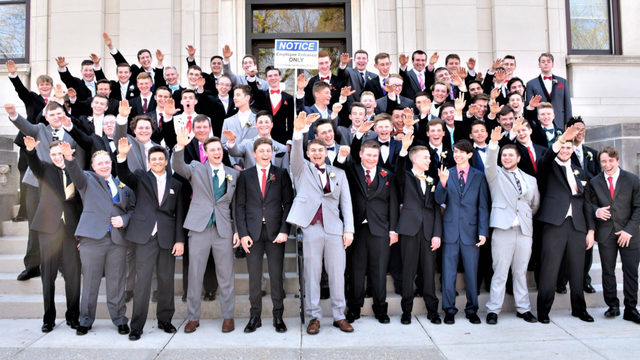 I wanted to say, this is how it begins. But this began a few years earlier, now it is manifesting itself. What comes next is scary.

This image comes from Wisconsin, a small town outside of Milwaukee. Hatred and nationalism is on the rise and that never ends well. Nationalism is NOT patriotism and should not be encouraged as being the same thing. But it is not just the fault of those who fall for it and cannot see any deeper than the hatred on the surface, this is becoming a global issue and it is encouraged and implemented by hands unseen. We have nationalism and fascism on the rise in South America with Bolsonaro, we have European countries falling prey to the same tactics.

This is a global phenomenon and should not be happening simultaneously across the globe... unless egged on by an agenda and controlled from outside. Who would benefit from an uptick of nationalism and the ensuing war and terror?

How are we playing into that agenda? How are our people being used for the same purpose?

The photo drew widespread condemnation, including from the Auschwitz-Birkenau Memorial and Museum in Poland and a state senator who represents Baraboo, a town of about 12,000 residents that’s about 115 miles (185 kilometers) northwest of Milwaukee.

“This is why every single day we work hard to educate. We need to explain what is the danger of hateful ideology rising. Auschwitz with its gas chambers was at the very end of the long process of normalizing and accommodating hatred,” the Auschwitz Memorial tweeted .

"Auschwitz with its gas chambers was at the very end of the long process of normalizing and accommodating hatred."

I found that a very powerful statement and a reminder that could use another mention. Death camps did not happen overnight, things like that do not just pop up, people need to be conditioned to it for years and years. We are not naturally predisposed to accept murder and ethnic cleansing. It comes through years and years of making excuses for and accepting the behavior, such as in the photo, that eventually flows over.

I did not notice the 'ok' sign in the front row until I searched for more on this and found this Independent article that points it out.

I'm in Wisconsin and have no doubt there are racist people here but I don't think this
is a Nazi salute.
Take a closer look: 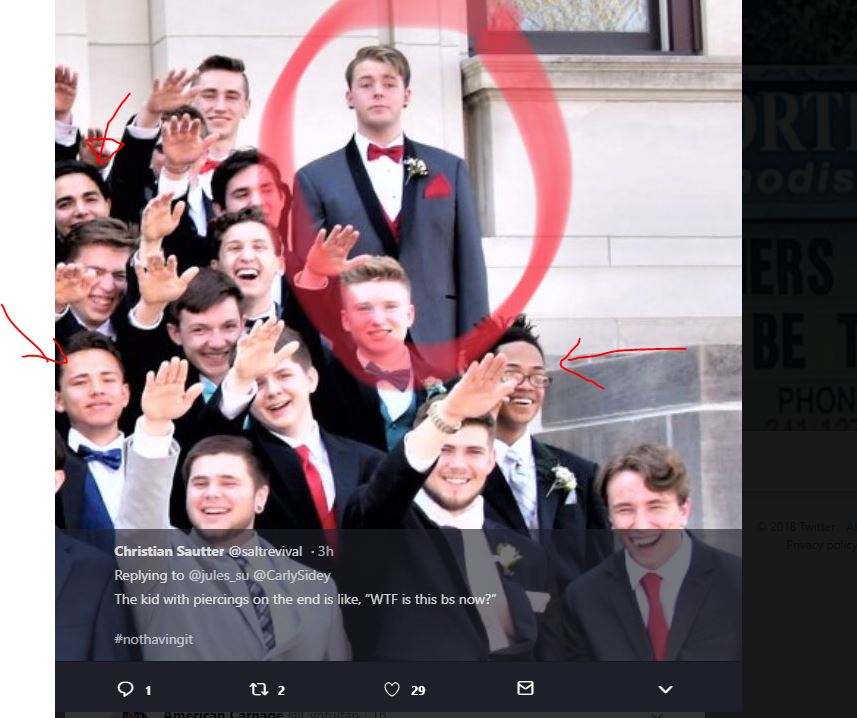 That kid just looks stoned. He probably missed the salute by a second.

Or maybe he's not a lemming.

What about the other 59?

Look at the ones I arrowed

originally posted by: burdman30ott6
a reply to: Mahogany

Yeah, that's probably it. It's not like the rest of the kids are doing a 'Seig Heil.'

Also it's from last spring.

posted on Nov, 12 2018 @ 02:50 PM
link
There's a bunch of white people in a photo waving. Somebody hurry up and call them racists and throw in the nationalist word to tie it in as well. That about sums up the OP.

originally posted by: jjkenobi
Where did you get the picture from? Neither link has it.

Also it's from last spring.

I searched for this story and read a few different stories on it. The Post had the most information. Image came from another article, saved it earlier in the search.

But if you google 'baraboo nazi photo' many will come up, some with the original social media post around it.

If they are, so? I mean, seriously, tasteless humor surrounds us daily, why would this be any different. It doesn't mean they're automatically serial killers, dangerous, or even racists... it would just mean they've got inappropriate senses of humor, which is neither criminal nor that uncommon.

Again, mountain from a molehill. Jokes didn't cause the Holocaust.

This is the next generation... that will be attending Bohemian Grove.

I heard Alex Jones is on the case. Fear not!!!

originally posted by: burdman30ott6
a reply to: Mahogany

posted on Nov, 12 2018 @ 02:52 PM
link
Looks more like a bunch of kids screwing around or a complete lack of understanding about what they're doing.

Poor taste for sure, but more than that..,,,meh


You getting some to look at the 'okay' symbol you're making because your three fingers mean 'A.S.S' and the hole formed by the thumb and pointer are the hole.

Get it? This is comedy gold.


The game starts out when the Offensive Player creates a circle with their thumb and forefinger, not unlike an "A-Okay" signal, somewhere below his waist.

His goal is to trick another person into looking at his hand. If the Victim looks at the hand, he has lost the game, and is subsequently hit on the bicep with a closed fist, by the offensive player.

I'm assuming it was nothing since it's been so long and we've heard no follow ups.

Seriously, yeah....I think the OP maybe trying desperately hard to make something out of nothing in order to push his own blinkered worldview....pretty sad.

And its old news.

We really do need a 'shaking one's head in disbelief' emoji.