Did I say I've actually done it ?

It's never came up. Around here, we seem to have something crazed Liberals don't....manners and tact.
Not to mention the lack of TDS.

posted on Nov, 12 2018 @ 10:23 AM
link
I'm not advocating violence, but as said above, if you walked into a bar in Detroit and called people slurs, you would/should have a reasonable expectation that you are inciting violence. Good luck convincing the prosecutor's office to champion your case as an assault victim.

Most bars/restaurants I've been to where that happened, the bouncer threw the troublemaker out immediately. This is not anything new here.
edit on 011CST10America/Chicago026101030 by InTheLight because: (no reason given)

posted on Nov, 12 2018 @ 10:32 AM
link
I'm sure there will be plenty of witnesses who can corroborate what occurred leading up to the video.

Come to flyover country and walk into any bar, restaurant, ect and call a man's daughter one of those names.
When the ass whoopin' stops hurting...

Assaulting someone for ill chosen words is a crime (maybe not where you live?)

We don't call the cops, we can take care of it ourselves.

I am trying to point out that emotions are getting crazy things said in today's world.

You never know what may work.

but now he has made a counter claim

i await the fall out of - what in my opinion is the most critical part of the claim [ to paraphrase ] :

" mr calsons 19 yo daughter was drinking , and buying drinks at the bar "

here [ UK ] - prosecutions for underage drinking are very rare [ unless linked to other charges ] - but we persue bars and other venues that knowingly serve alcahol to the underaged .

OR...maybe Tucker's kid threw a glass of wine in anger, and some of that wine just happened to land on the guy who decided to verbally taunt Tucker's daughter. Unfortunate coincidence.

Now, ordinarily I wouldn't go here, but seeing as how this seems to be the way the left plays the game lately I guess everything is fair game!


It is obvious that Tucker's son offered a glass of wine to the idiot harassing the young lady. The idiot didn't open his mouth fast enough and spilled it on himself. ¡qué triste!


Why does the left feel that to scream F bombs, as example, in someone's face is OK

(A) No person shall recklessly cause inconvenience, annoyance, or alarm to another by doing any of the following:

(1) Engaging in fighting, in threatening harm to persons or property, or in violent or turbulent behavior;

(2) Making unreasonable noise or an offensively coarse utterance, gesture, or display or communicating unwarranted and grossly abusive language to any person;

If Tucker's daughter is a minor then there is more...as in it is a form of assault...


The other side of this and one I bet many celebrities deal with is there are people always trying to set them up. The guy most likely wanted to get his ass beat. With you in a bar in a bad part of town doing this there is no one to sue after your ass beating...lol
edit on 12-11-2018 by Xtrozero because: (no reason given)

I assume you are calling me the left. Not so.

Anyway, If DC then have it dealt with legally. I guess I don't understand this violence that seems to be a believed to be normal reality and remedy. OK for my team, not OK for your team mentality.

originally posted by: skywatcher44
Thought to post this as it makes my blood boil. I follow Tucker Carlson on twitter and this is shocking and should seem so by both sides
What do you all think is this allowable ? the glass of wine in the mush should be. Bloody fruitcakes. Jeez Louise.
Take care my American friends and be Frickin civil.


Last month one of my children was attacked by a stranger at dinner. For her sake, I was hoping to keep the incident private. It’s now being politicized by the Left. Here’s what happened: 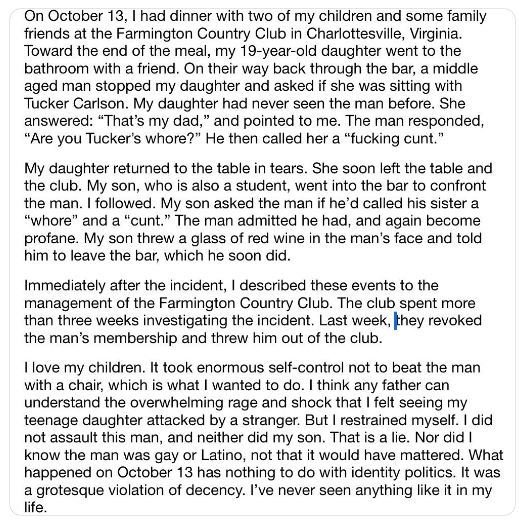 This is the work of Mad Max and her disgusting compatriots.

I assume you are calling me the left. Not so.

Anyway, If DC then have it dealt with legally. I guess I don't understand this violence that seems to be a believed to be normal reality and remedy. OK for my team, not OK for your team mentality.

Your post assumes you do not see anything wrong with verbal assault as you ask who is the law breaker...

I'm not calling you left, I'm saying is the left find it perfectly OK to harass anyone on the right vocally with extreme ways. It is funny how that is OK, but then they will turn into word/thought police in a second...Its like they are bipolar.
edit on 12-11-2018 by Xtrozero because: (no reason given)

posted on Nov, 12 2018 @ 03:10 PM
link
To me this further illustartes that avenatti doesnt even know how to lie effectively.

This was illustrated with his client Swetnick in her claims about kavanaugh.

Her story was so outlandish and involved so many people committing and being victims of gang rapes, that it was obviously a lie.

The same is true of avenattis claims here.

His claim that his client was just sitting calmly by himself doing nothing, and then tucker and his family and others start flipping out on him for no reason defies reason.

Perhaps it would have been more beleivable had he admitted his client had some provacation, and tucker and family went over the line in response.

But as is, avenatti proves himself to be a lair again.

In addition, this comes after tucker and his family were just accosted by antifa, making avenatti even more of a scumbag for so clearly lying in an attempt to pile on.

I hipe he is charged for his lies in the investigation from the swetnick fiasco.

Meanwhile, kudos for tucker for not coming public with this incident when it happened in early october, and seeking to use it to gain political points by blaming the left.

originally posted by: soundguy
Oh no. Sorry you are so easily triggered there snowflake. The video seems to prove Tucker’s is a liar. But then again those of us with no agenda already knew that. a reply to: skywatcher44

Where in the video? I've watched it three times and it proves or disproves nothing I can see? I'm curious what it is you see? Could you please point it out in the video?


originally posted by: DAVID64
a reply to: InTheLight

In the oh so careful PC world, I suppose calling someone's daughter a whole or c*** is excusable.
In my world, you're gonna be missing teeth.

Welcome to the real world.


To that member, she/he seems to be saying it was excusaeble because the guy was drunk. So you knows, can't condemn him for the c@nt and whore talk.

I didn't say that, I said why use physical violence to address situations like this.

Yes you asked why use ohysical violence, but you ALSO made an excuse for the guy,saying maybe he was drunk or has some disability.