Can Someone Explain Arizona To Me?

posted on Nov, 11 2018 @ 11:06 PM
link
I just don't get the numbers.
Republicans had an advantage of 5+ in early voting
Republican Bucey wins governor by 15+
Republicans flipped a state senate seat and two state house seats
Sinema was recorded calling the people in her state imbeciles and saying her state was a meth lab.
Yet Sinema looks like she'll win, the first dem senator from AZ in 30 years.

Shenanigans come to mind.
Hoping to flip the Senate majority?????

The MI map also reflected these shenanigans. Whole state minus Detroit and the burb went red but we someone how a D senator and governor.

posted on Nov, 11 2018 @ 11:20 PM
link
Does not make much sense. There is one thing most people don't like around here is liberal and Democrat side of things.

Are you from AZ?


AZ Senate race is "interesting" because the statewide race for governor saw the Republican Ducey win with 57%. Garcia for the Dems had 41%. 2% for the Green candidate.

The statewide election for Senate shows over one-in-ten Ducey/R voters had to switch to a Sinema/D vote when it came to the Senate race. That's a 8 point swing over all for a candidate who is not remotely moderate. This is the "AZ is awful", "I think that's okay-Taliban" candidate. McSally the R candidate was pure vanilla.

I just find that eyebrow raising. Statewide election goes 57-41-2 R/D/G. Statewide election on same ballot goes 48-50-2 after all the late vote counting, when early returns had the R candidate up? It might be more understandable if there was some scandal connected to McSally, but she looks boring. Green stayed constant, so those votes didn't flip to D. Had to be 12% of the R voters to make that swing.

Its also a little odd that more total votes appear in the Senate race than any other.

one in ten is huge. This is bigger than that. So if anyone here lives in Arizona, you should be talking to as many republicans as possible and asking if they voted for the R governor and Sinema. This should be a detectable shift even anecdotally. Don't stand by and let them steal the election.

If Sinema won fair and square, so be it. I just have my doubts based on the numbers. They're genuinely weird.

Shenanigans come to mind.
Hoping to flip the Senate majority?????

Yeah. That was my thought. RBG retires and stall until 2020, impeach Kav then load the SCOTUS with BOTH Obamas.

originally posted by: JinMI
a reply to: DontTreadOnMe

The MI map also reflected these shenanigans. Whole state minus Detroit and the burb went red but we someone how a D senator and governor.

Look at the vote totals in Wayne, Oakland, Washtenaw and Ingahm in particular. The Detroit metro area is nearly half the state's population. Governor and Senator are statewide elections. All of the House districts in those areas also went for the Dems of course. What are there, 14 districts? Looks like an even split. Here are zoomable interactive maps with totals:

You want to see something that is really hard to understand? (full size)

Ducey is the incumbent and the polls had Ducey with a 16 point lead. The polls were a tossup for Sinema v McSally.

Can you explain why the only state showing R's leaving their party in the senate race (at a huge 12% clip) is Arizona? For a candidate who called the people in her state imbeciles.
edit on 11-11-2018 by Dfairlite because: (no reason given)

According to this Bloomberg cartogram, and to the nytimes one listed above, only one house seat in AZ was flipped and it went to the Democrats. The Senate race is not done, but a lead for Dems currently.

Looks like only 3 House seats flipped to the Republicans, nation wide. 2 in Minnesota and 1 in Pennsylvania.

The Democrats flipped 35 seats so far, for a difference of 32.

Reading comprehension is key. Go ahead and read what I wrote then you can delete your post.

originally posted by: Dfairlite
a reply to: Mahogany

Reading comprehension is key. Go ahead and read what I wrote then you can delete your post.

Yeah, re-read it and you're still not correct.

What map are you going off of where two seats flipped to Republicans. Or are you wondering about some early, early poll that you took for granted?

In your five posts so far in this thread, you've provided zero links.

Yeah, you're just not very good at reading. What is a state house seat? What is state senate seat? Why are the articles you linked not relevant?
edit on 12-11-2018 by Dfairlite because: (no reason given)

originally posted by: Dfairlite
a reply to: Mahogany

Yeah, you're just not very good at reading. What is a state house seat? What is state senate seat? Why are the articles you linked not relevant?

It's all good, I'll explain it to you. 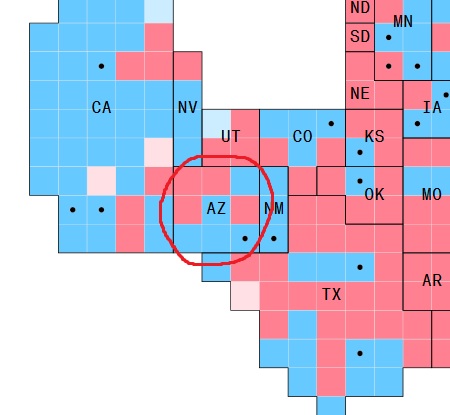 See those 9 squares for Arizona? Arizona has 9 House seats. 5 went to Democrats and 4 to Republicans. The one with the DOT is a flip. That flipped to Democrats.

For someone starting a thread on this very thing, I hoped you wouldn't ask what a house seat means, and that you would be able to read the cartograms.

Have a good night.

This is a good theory. What day did she fall? When did these extra votes start being "found"

Oh goodness, I'm embarrassed for you. Condescending and dense! What a winning combo! Each state has their own congressional house and senate, genius. A state house seat is a house seat for the states congressional house. A states senate seat is a seat in the states senate. These are not federal offices, they are state offices.
They do not represent the state federally they represent the local districts at the state level.