Time for a press boycott of White House press conferences

Time for a press boycott of White House press conferences

Really?
If that’s a threat, you don’t seem to comprehend how a threat works.
You threaten to do something that folks are begging you not to do.
You don’t threaten to do something most folks wish you would do.
This is like saying, “If you don’t let me come to your party, get drunk, puke on the food table and get into fights, then I’m not coming to your stupid party!”
Or, it’s like cat-owning, crabby feminists vowing to withhold sex until you vote the way they want.
It’s just not much of a threat.
The fact is, if these partisan Trump haters boycotted the White House Press Briefings, the reporters that remain will be those who actually take their job seriously and ask honest, probing questions.
Sounds glorious, no?
We haven’t had that in years.

So the press, the MSM wants to boycott the White House.


Trying to figure this out.

What WAS the purpose of the press? I mean, does the White House NEED the press in order to function? Or is the MSM thinking too highly of itself?

Since the advent of the internet, many of us has become "citizen journalists".

We report, we opine, we dissect the news, the events that happen.


Has the MSM become less relevant?

Now some talk of boycotting.

Welp, don't let the door hit ya where the good lord split ya! 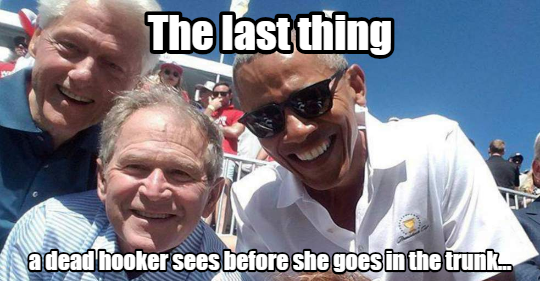 what bloody idiots, they truly think they are still untouchable and vital...


I say great they are rushing themselves into oblivion.

Trump wants them to boycott, and then there will be no opposition.

This is a great idea. Do it and play right in to Trump's hands.

JA got what he deserved for being an unapologetic dick.

Trump wants them to boycott, and then there will be no opposition.


2D chess:
Many of the Press Corps have forgotten that they are journalists first, and not political mouth pieces for the opposition.

Hey, why not? That'll end the White House fake news being reported to the fake news outlets to be broadcast by fake news reporters.

Their obsession with Trump has gone too far for too long. He is virtually all they report on, or everything else they report on somehow relates to Trump. And when they're not reporting news about Trump, they're trashing the man, his presidency, his family, his administration and anything else they can find to include with their opinions about him. They're all certifiably insane.

I applaud them in their endeavors.


I said before and saying again. Self-coup d'é·tat coming. Every other option had been tried by this government and nothing works. Democrats/left know it's coming, that's why they want to take down Trump first.

posted on Nov, 10 2018 @ 08:06 PM
link
I said back before the last presidential election, that if I was the new President I'd make enemies pretty quick, because I'd get rid of the daily press briefing, except for on Friday after lunch for 30 minutes, or when the White House had 3 things it wanted to broadcast.

Most of the DPB is like, "What does the President think of the election in Brazil?" No one gives a rip. Not in the USA, not in Brazil. The reporter is like someone going to NASCAR race: they are hoping to see a wreck.

I cold imagine REALLY p'o'ing the media and SELLING seats to the daily press briefing. Or getting rid of the MAJOR media and get people like local newspapers from Spokane and Oshkosh and Abiliene and giving them the front row seats in the press room.

What will we do without WH reporters???

What will we do without WH reporters???

That's right who needs the press anyways, all they do is ask annoying questions and stuff...

When was the last time the White house press core was actually useful to the masses?

We don't have a press. Haven't for quite some time now.

PLEASE don't boycott the White House! PLEASE, MSM, we need your guidance! Trump won't be able to function without you, and it will destroy him! Please come back! We need you!

(Around here, we call it reverse psychology...)

Momma always said the trash ain't gonna take itself out.

She'll still be right after all is said and done but it's nice to hope.