posted on Nov, 10 2018 @ 05:23 PM
link
Lets be honest Trump used the weather as an excuse not to attend. General kelly managed to go to the site and we are to believe Trump just couldn't get there. It is an hour drive if he couldn't fly worth the trip to honor veterans from the great war.

Sadly we need to continue to remember these conflicts with the hope we can learn from them and avoid future conflicts.

originally posted by: bigfatfurrytexan
when i woke up this morning, Trump not visiting a memorial was slated to have zero impact on my life.

I suspect when I lay my head down to rest, it will have had no more impact on my life. Other than if i choose to bicker about it with people on the internet.


Perhaps we should all remind ourselves that this time is of remembrance of the many millions who died...not about any victory celebration.

And while all the hoopla about him not having respect for our troops can be considered we must also remember just how old he is and not press our judgment on him for what may be a glimpse of all of your futures. It's not my future, it is my present.

The vast majority of people who say that never served, so who cares.

No, it's not about victory. It's never been about that.

It's about nations bleeding themselves white, an entire generation of men and boys lost in the maelstrom of those trenches. My own Grandfather was a doughboy...and tomorrow, and nearly every time I remember him, I honor him--not just for those trenches, but for being the wonderful man that he was--despite the scars those trenches left on him.

One doesn't need to lay a wreath on a headstone, or on a crypt, to honor the sacred dead. By simply remembering them, and working to help prevent another conflagration of that sort is honor enough, I should think.

In Flander's Fields. by John McCrae

In Flanders fields the poppies blow
Between the crosses, row on row,
That mark our place, and in the sky,
The larks, still bravely singing, fly,
Scarce heard amid the guns below.

We are the dead; short days ago
We lived, felt dawn, saw sunset glow,
Loved and were loved, and now we lie
In Flanders fields.

Take up our quarrel with the foe!
To you from failing hands we throw
The torch; be yours to hold it high!
If ye break faith with us who die
We shall not sleep, though poppies grow
In Flanders fields.

We would do better to honor them by making sure that there aren't any more "crosses, row on row". When we don't, we are, once again, breaking faith.

I spent the entire day with my marines celebrating our birthday. None of us, not even 1, give so much as the tiniest little # about this...

originally posted by: xuenchen
Some rumors of a possible security breach too. 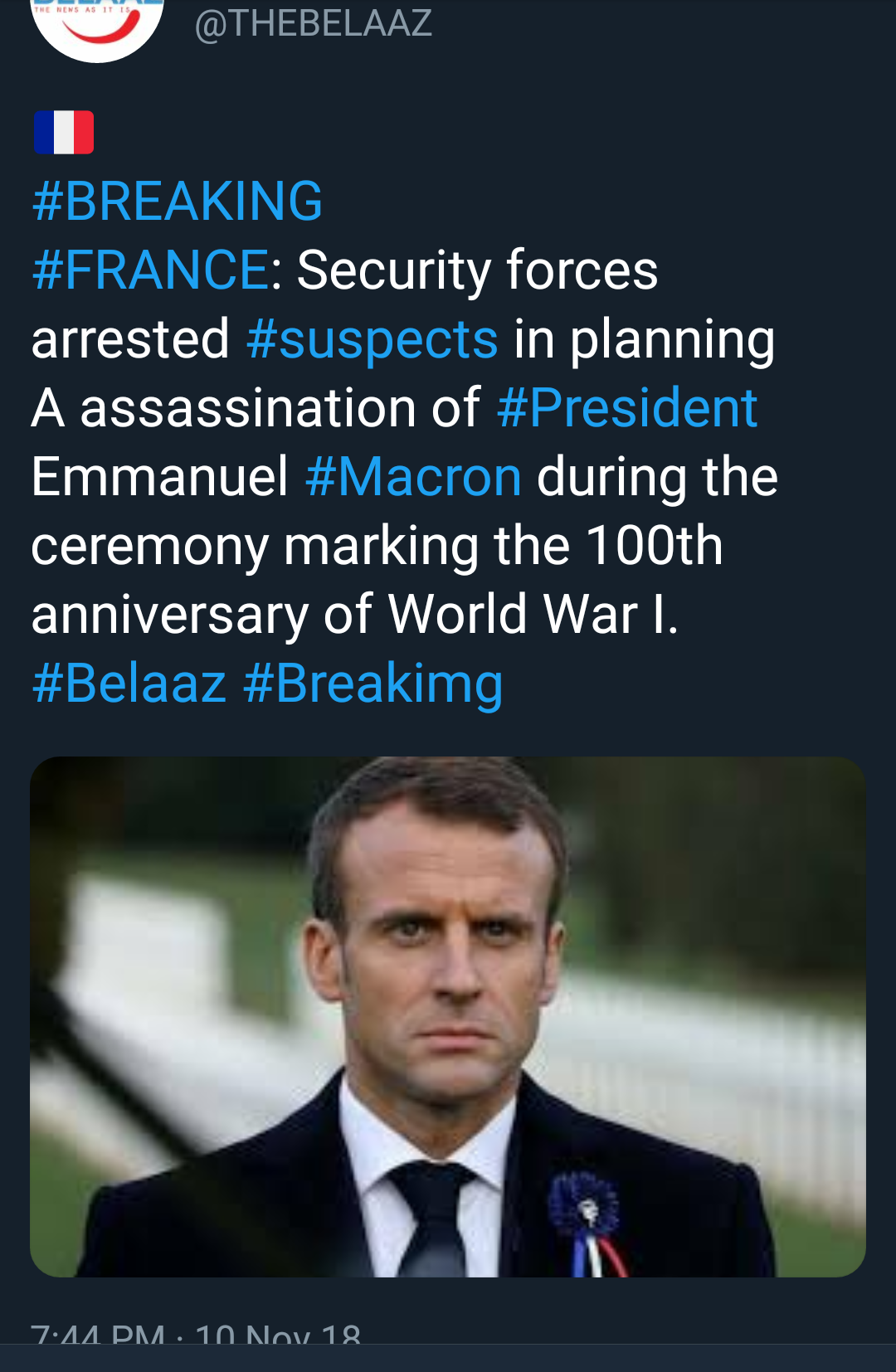 posted on Nov, 10 2018 @ 09:46 PM
link
Players kneel during national anthem - the right cries about faux disrespect. Trump actually disrespects military by not attending memorial due to weather yet Kelly somehow made it - the right says..that's OK no big deal.

Yep nothing to see here, just more hypocrisy from the usual crowd.

Everyone whom stood up for or just even watched the commemorations today and whom stands in respect every year.

A hell of a lot more of us than you may think.

And just about every single former service person in the affected nation's as well as family's of those that lost son's AND daughters in those wars.

Not the politician's or the political extremists human waste heads but the normal every day people that suffered through these event's.

originally posted by: toysforadults
who cares

PSS: Hillary woulda been there...

Yeah, and she would have been ducking sniper fire when the helicopter landed, right?

Kind of ironic Belleau means 'lovely water' and Trump sites rain as a reason for him staying behind.
Of course we never would have spent any time at all learning about WW1 if it wasn't in the news due to something..

originally posted by: Rewey
a reply to: soundguy


Oh come off it. Trump was not attending a memorial for the Confederacy. Not even he is that stupid. The two examples are not analogous at all.


originally posted by: Rewey
a reply to: soundguy


Oh come off it. Trump was not attending a memorial for the Confederacy. Not even he is that stupid. The two examples are not analogous at all.

Confederates were still Americans fighting for something they believed in, and like it or not they had a far greater impact on the American identity than those fighting in ww1. Just because you don't agree with their cause doesn't diminish that.

I was a former history teacher, with a history professor and two war historians in the family. If you don't think that the 'good guys' did some pretty horrible things during war (any wars), then you're kidding yourself. But they're still honoured, which I 100% agree with - I've also had family fight in every major war since ww1.

originally posted by: JinMI
a reply to: soundguy

Your sources have as much cancer as your op.


Geez, your predictable. If you see something about Trump that bothers you, you do not confront the possibility that he is a #ty person, you stick your head up your ass and criticize the messenger. If you don’t like the source the OP gave you, how about this one from Fox News:

Trump cancels due to rain

The confederate army was an enemy to America, so why does the right insist on waving an enemy flag. Any other enemy flag, you guys would be going nuts but for some reason, the enemy confederate flag is OK.

posted on Nov, 11 2018 @ 08:06 AM
link
Well I would say you should care. Every time you enjoy those freedumbs you rwnj’s go on and on and on about, you need to remeber those who died for those rights. Oh how quickly you hypocrites forget. a reply to: toysforadults