Is Donald Trump A Racist?

My council thinks we are all crazy.

Unreliable lot I tell ya!

originally posted by: soundguy
Yes, without a doubt, and a bigot as well. a reply to: CharlesT

I've asked the same question. They always resort to saying that his dad was involved in a KKK rally in New York in the 30's (so Donald is racist) or an apartment complex he owned in the 80's wouldn't rent to blacks (so he gets the blame, even though he didn't run it) or his talk about Mexicans and other Central and South Americans sending bad people here.

None of it makes any sense but it helps them sleep at night and it helps normal Americans see the true intentions of liberals when they don't like someone.

originally posted by: underpass61
a reply to: soundguy

Perception is everything...which is why the media is so evil and is often times pushing a false narrative to influence one side or the other. It's a disturbing reality.

originally posted by: CharlesT
a reply to: Templeton
I'd like to watch your video but I'm on satellite internet with limited bandwidth. 45 minuets is a little much for my limitations.


That's just the first part. It's a good video using meme format to dig into the story. PSA sich does great editing.

posted on Nov, 10 2018 @ 11:16 AM
link
I wouldn't know the precise statistics behind it, but if you notice the amount of times the words racist, Nazi, and Hitler are used nowadays in comparison to decades past it's astounding. And its the media's fault.

In the 80's amd 90's these words came up, but certainly weren't weaponized nearly as frequently. It's like the further we get away from WW2, the more this nonsense becomes exploited. It's dishonest at best.

posted on Nov, 10 2018 @ 11:24 AM
link
a reply to: Tempter
What you state may be true but I pity the person that can not accept fellow humans with the dignity they deserve simply because of their origin.

proof from who? as i told you it depends on you. for many people he is a racist. for me he is a #d up old man. tell me one person you see as racist. im curious.

Your argument is mute. Semantics don't cut the mustard here.

He is not a racist
he is just a realist
easy to prove he is right, just look in the statistics
edit on 10-11-2018 by Spacespider because: (no reason given)


originally posted by: underpass61
a reply to: soundguy

Perception is everything...which is why the media is so evil and is often times pushing a false narrative to influence one side or the other. It's a disturbing reality.

Perception is "feelings". There's got to be at least one piece of impartial evidence that can prove he's racist. I'd like to see it.

posted on Nov, 10 2018 @ 11:43 AM
link
I would have to say no because he's not a democrat. Democrats have the corner on racism and always will. Modern day plantation dems call any blacks that try to escape Uncle Tom's and worse, a modern day way to bring them back to the plantation and do the owners bidding for a little food and drink.

Oh yeah, totally a racist!
He's so racist he took pictures with Rosa Parks!
And he smiled!!! Such a racist as he stumps for Israel and Jews harder than state side Jews themselves. Obvious racist. That man is so bigoted, I even saw him hanging with the likes of Snoop Dogg and Kanye before. What a hater!
Nobody believes he likes other races. Even the myriad of non white women he has dated in the past. Yep. The guy who 4-5 years ago was considered "The Donald" and had a Comedy Central Roast, a WWE appearance, and his own television show...is the worlds biggest racist.
There, I said it.
/S/

posted on Nov, 10 2018 @ 12:33 PM
link
He's not. Every time he talks about racism, he strongly denounces it, even going so far as to say racists have no place in America. Now... There's a reason the MSM is referred to as "fake news", and this whole "Trump is racist" bs is the perfect example of why. Many of the MSM outlets were outright blatantly lying about how Trump was "refusing to condemn racism", while in reality, he was actually directly speaking out against it the entire time. The only reason anybody thinks Trump is racist is because of the MSM spreading lies and manipulating people.

Listen to Trump himself instead of the lying MSM snakes: 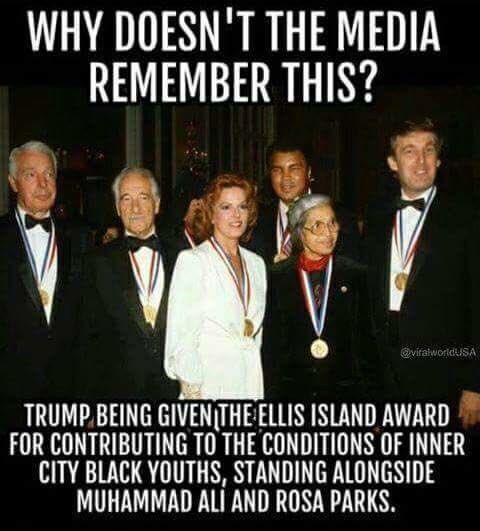 The Ellis Island Medals of Honor embody the spirit of America in their celebration of patriotism, tolerance, brotherhood and diversity. They recognize individuals who have made it their mission to share with those less fortunate their wealth of knowledge, indomitable courage, boundless compassion, unique talents and selfless generosity; all while maintaining the traditions of their ethnic heritage as they uphold the ideals and spirit of America.

posted on Nov, 10 2018 @ 12:47 PM
link
This website is overpopulated with far right wing trump supporters so I don't even know what the point of some of your threads are for, just to beat up libtards online? Pathetic. He's very racist, practically everyday. Here's a list from August 2018 USA TODAY

If a whole lot of you think Donald Trump is not racist, which is completely insane, then a whole bunch of you must be racist yourself.

Hey by the way, when are the parents going to be united with their children?

This website is overpopulated with far right wing trump supporters


Been a member since 2007, and lurked for a couple years before that. It has always looked to me to be a good cross section of the nation and the globe. Maybe you should complain that too many people are Trump supporters?