Pardon the non-work related interruption but this weekend is a pretty cool anniversary (well at least I think so!)

At 6pm Sunday 11/11/18 (11am UK/France) the world marks 100 years since the first terms of the Armistice came into effect, ultimately ending WWI.
WWI - A war that ended with 21 million casualties including 62,000 Australians (1.4% of our total population at the time) and gave us the ANZACS.
The most destructive war in history was fought by 65 million people from 30 different countries under the old principles of empires, kings and treaties.

The armistice was signed 5am, Nov 11, 1918 in a non-descript railway car north east of Paris in Compiegne, it came into effect 6 hours later - the 11th hour of the 11th day of the 11th month.
Unfortunately, during the outbreak of WWII Hitler captured that railway car and forced the French to surrender to Nazi Germany inside - he then destroyed the railway car later in the war - it's now lost to history!

Do you know why they're called 'Tanks'? The British needed a codename for the behemoths so the Germans wouldn’t know what was coming. So the British called them ''water tanks'' due to their size and shape. The name stuck!
The Germans tried to replicate the British tanks (below left), but they were a failure. Only 1 German tank remains in existence today 'Mephisto' (below right) - captured by Australian troops. It lives out its days in Canberra at the war memorial.

The French suffered the worst single day loss during the entire war, losing 27,000 people defending Paris in a battle.
Germany made it to within 8km of Paris in the final year of the war - that’s from here to Canning Highway Bridge! Had they taken Paris - where would we be today, would the Eiffel Tower still exist?

The British lost 19,000 people in a single day during the battle of Ypres. Churchill said of Ypres ''A more sacred place for the British race does not exist.''
Every night for the past 80yrs the 'Last Post' is played at Menin Gate, Ypres to remember those who still lie in the fields. Ypres has been rebuilt and it's beautiful - but the fields are still littered with bombs and bones.

But how did the War start?

The Heir to the Austrian throne, Arch Duke Ferdinand was travelling in his car (below centre) in Sarajevo.
His driver took a wrong turn on the way to a hospital. By chance, he happened to drive past an anti-Austrian Serbian nationalist; Gavrilo Princip - who was drinking at a pub on the corner (bottom left-now a museum)
Gavrilo, an opportunist terrorist, stepped out from the crowd and fired two bullets at the car. Both the Arch Duke and his wife were killed. Gavrilo was immediately detained by security (bottom right - although this is disputed to not be him)
Austria called on its allies to honour their treaties and back them in retaliation. This cascaded into Europe splitting on either side of the 'Allies' or the 'Central Powers' - and just like that, WW1 began.

Four years later and 21 million young lives destroyed, the world finally found a path to that non-descript railway car to sign that armistice.
When the war ended; Monarchs, Kings, Thrones, Empires and Treaties became part of the old world, although we still see glimpses of it today!

After the treaty of Versailles was signed (Nov 1918), Ferdinand Foch - Supreme Allied Commander said: "This is not a peace. It is an armistice for twenty years!"
20 years and 10 months later WW2 officially began when Nazi Germany invaded Poland (Sep 1939)

That was not the only prophetic aspect of the Great War. The war officially ended 11th of Nov 1918 - 11/11/18
The licence plate of car the Arch Duke was driving when assassinated (starting the war) was A11 11 18 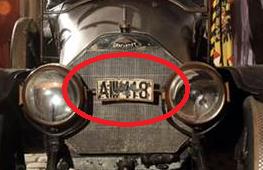 When you think of all the petty things people and nations fight about in today's world - take hope that humanity always prevails.
Below you have a German soldier lighting the cigarette of a British soldier in the first few years of the war during the Christmas truce.
In a different time, they probably would have been friends! 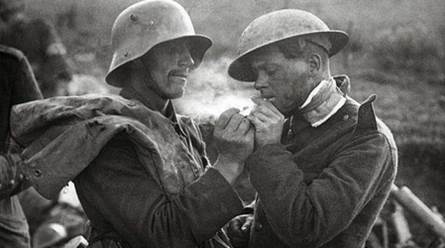 I could ramble on for hours about the history of the war, if anyone's interested I have a small box of relics, bomb fragments, artillery, barbed wire, bank notes and grenade fragments I've found while digging in Somme, Ypres and Verdun in my office!
You're welcome to come check it out and hold some history!

They shall grow not old, as we that are left grow old:
Age shall not weary them, nor the years condemn.
At the going down of the sun and in the morning,
We will remember them.
edit on 8/11/2018 by chr0naut because: (no reason given)

Lest we forget, the Canadian troops also lost a massive amount of young men. Not to mention the men who were never the same after they came home.

posted on Nov, 8 2018 @ 08:42 PM
link
Director Peter Jackson has recently made a documentary on WW1 where original footage has been digitized to a very high quality.

originally posted by: weirdguy
Director Peter Jackson has recently made a documentary on WW1 where original footage has been digitized to a very high quality.

this comes out Sunday here, I cant wait.. thanks for the reminder too - i totally forgot!

posted on Nov, 9 2018 @ 01:00 AM
link
Battle of the Somme, 3 million soldiers fought and one million died, used as human sandpaper to wear down the opposition in a war of attrition, basically keep throwing young men at the enemy to shoot at until they ran out of bullets and artillery shells.
It was all planned out this way, those who died were termed as "useful wastage" (even worse than collateral damage!).
Amid this carnage there were many stories of bravery, heroics and mateship.
REAL humanity still shining through in the most darkest utter hellscape imaginable.
I think people need to remember what men like these endured when whining about today's petty politics. The current disgraceful left/right carry-on is a spit in the eye of every soldier that died in these horrible wars.
edit on 9-11-2018 by Osirisvset because: (no reason given)


King George was only nominally responsible for his country's policy. Behind the scenes, the same was probably almost true even about the others. Certainly it was the Kaiser's military men who told him that he had to declare war on France at the same time as he declared war on Russia, because the railway timetables in their war-plan were set up that way.


The Heir to the Austrian throne, Arch Duke Ferdinand was travelling in his car (below centre) in Sarajevo.
His driver took a wrong turn on the way to a hospital. By chance, he happened to drive past an anti-Austrian Serbian nationalist; Gavrilo Princip - who was drinking at a pub on the corner (bottom left-now a museum)
Gavrilo, an opportunist terrorist, stepped out from the crowd and fired two bullets at the car. Both the Arch Duke and his wife were killed. Gavrilo was immediately detained by security (bottom right - although this is disputed to not be him)


The terrorist group were hoping to kill him that day, and were waiting for him. Hence Princip having a gun ready. So it was only the precise moment of the assassination that was opportunist.

originally posted by: GBP/JPY
Peter Jackson .....hehe....Bad Taste....filmed in New Zealand, man....the invading aliens get slammered badly...like with chainsaws man.....heheYes, it's worse even with Jewish convocation days hitting the 9th and 11th..... .,but that dude in the top pic in the middle Wilhelm ll....spitting image of my Air Force buddy Tom Sessions....dude......I could kiss him....stately lookin fella

Bad taste is an awesome film!

As One veteran said, The politicians should have been armed and sorted it out themselves, rather than send millions of young men to their graves early, in what was tantamount to mass murder.

My Great Grandfather was at the Somme and whilst he wasn't killed during the war, his life ended prematurely due to the gas attacks and shell shock.

In the going down of the sun, and in the morning, we will remember them.