posted on Nov, 8 2018 @ 04:03 AM
link
From blocking traffic in Portland, while cussing out people, to confronting people at permitted rallies and restaurants, to now assembling and trespassing on someone's property...what's next for these unhinged Antifa thugs? According to them, Tucker Carlson is a racist and promotes fascism. 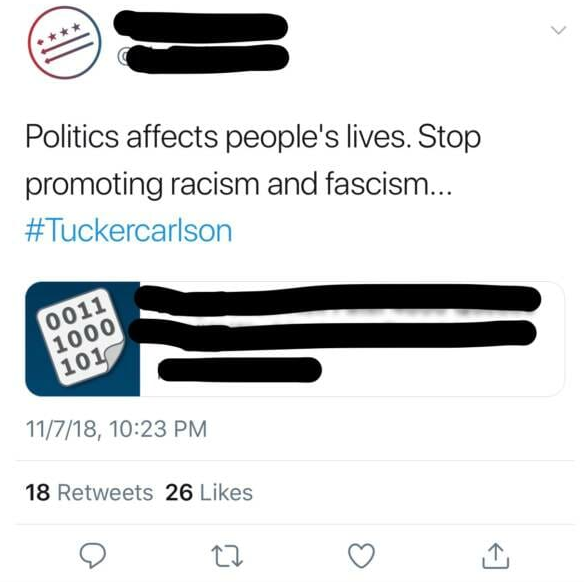 Smash Racism, D.C. posted on it's now "suspended" Twitter account, a picture of Tucker's home address. On it's facebook account, they posted that Tucker spreads "fear into our homes" and called him a "Racist s---bag." They also posted a video clip, which has now been deleted, of their "activists" chanting “Tucker Carlson, we will fight. We know where you sleep at night.”

Speaking through a megaphone, one activist seemed to blame Carlson for promoting “an ideology” that has led to “thousands of people” dying at the hands of the police, while another referenced the recent mail bombs sent by Cesar Sayoc Jr. and the anti-Semitic synagogue shooting in Pittsburgh. The protesters then began to chant, “Tucker Carlson, we will fight, we know where you sleep at night!”

Carlson, host of "Tucker Carlson Tonight," was not home at the time. He said his wife, Susie, was home alone and heard the commotion from the kitchen. She called the police and locked herself into a pantry, he said. His brother -- who lives close by -- arrived about the same time as law enforcement.

The host said activists rang his doorbell, broke his oak door and one protester was apparently caught on security video mentioning a pipe bomb.

“Here’s the problem, I have four children,” he said by phone. “I never thought twice about leaving them home alone, but this is the reaction because this group doesn’t like my TV show

Apparently, it's OK for Left-wing domestic terrorist groups, to attack and slander Conservatives by calling them racist and fascists in the streets, in restaurants and now at their homes. Homeland security warned that this might happen, last year.

Federal authorities have been warning state and local officials since early 2016 that leftist extremists known as “antifa” had become increasingly confrontational and dangerous, so much so that the Department of Homeland Security formally classified their activities as “domestic terrorist violence,” according to interviews and confidential law enforcement documents obtained by POLITICO.

Someone please explain to me why Tucker Carlson is a fascist and a racist. Is it because he calls out the Left? Is it because he promotes intelligent debate and discussion on his shows? I like Tucker because he speaks the truth and is always willing to politely debate someone from the Left on his show. However, he does not back down from calling someone out for saying something he doesn't believe in...which is his right. Apparently, Antifa doesn't want you to have that right, if it goes against their "ideology." Much easier for them to cause violence and call someone a fascist, instead of being tolerant of someone else's views.

Clearly these hardline leftists are disproportionately in our media for a reason. Is it to further promote a divide? Is it to discredit the left?

These situations feel manufactured. I'm not saying they are, but they feel that way.

The outcome? The left are viewed as worse and worse, until the point where we are all on the right?

Another possible outcome is the self-fulfilling prophecy - behaviour breeds behaviour, in ten years time are all leftists going to be hard line activists with abhorrent views?

Seriously though, this is getting pretty worrying now.

I'm reminded of the Bolsheviks. These people must be completely ignorant of history.

In completely unrelated news: Freedom of Speech, Right of Demonstration, Police:Serve&Protect AND "Whining about your own popularity".

It sucks to have happen, but there are legal ways to deal with it. *shrugs* Pointing out that oneself is the Good Guy(tm) and the others must be the Bad Guys(tm) is not helping.

You can see screen shots in this thread: www.abovetopsecret.com...

What you need to do is get a big ol can of bear spray. It's a good start. You can add ingredients as needed.

originally posted by: and14263
What do we think this is building to?

Someone is going to be dragged out into the streets and lynched.

That's what this escalation is building to.

That's what they want you to think.

And if someone is lynched - what is the result? More regulation upon hate crimes? How would the media and your government spin it?

I don't think this is as simple as face value.

Run around bullying, mobbing, threatening people -- JUST LIKE NAZIS. F--king hypocrites!!!
edit on 8-11-2018 by Kromlech because: (no reason given)

That's probably why his wife called the police dont you think? Is he not supposed to report what happened? Are you actually disparaged that he is calling out bad actors for harassing and threatening his family?

originally posted by: Wide-Eyes
a reply to: shawmanfromny

No, this is the call to law enforcement to be allowed to remove even more rights from people, people like you and me. One side will cheer this on as a win but nobody wins, well at least among us plebs.

I´ve been saying that for years, no almost a decade. And it get´s worse every year. Threatening citizens, burning down their property, all in the name of politics, just like Cologne.

"It´s their (the governments) fault, they should not have held it here"

and all those thugish excuses to themselfes to act out and destroy others property.

The fun fact with all the "anarchism" they want to invoke, I guess NONE of them have a family in the sense of that they care for someone. It´s always the young idiotic antifa anarchists that want anarchy. Because they have nothing to loose. No one of them thinks about what true anarchism really means, that everyone could round up your family over night, for #s and giggles.

This makes me so angry and sad at the same time. I feel angry towards their stupid and sad for their souls.

Just disgusting low lifes. Put them all into a prison cell and let them live their anarchy, just like they want too. Video tape it and then show it to the rest of them so they get an idea what cruel and heartless things they promote.
edit on 8-11-2018 by verschickter because: (no reason given)

What you talk of, that attitude was stereotyped quite graphically in a clockwork orange. Sadly it seems some people see that as enjoyable...

The one that in 100% of the times will defend anything against any kind of establishment. I saw it coming, honestly.

So you promote antifa and violence?

You haven't seen the movie have you...

Language barriers suck, in the movie thugs go into someone's home and terrorise them. It's not OK its never OK....not even threats... Ugh..

ETA... Hilarious you have 2 instant stars so I'm betting language wasn't a barrier for them just wit.
edit on 8-11-2018 by hopenotfeariswhatweneed because: (no reason given)

posted on Nov, 8 2018 @ 06:02 AM
link
Not having seen a movie doesn´t count as language barrier. It´s just you expecting that everyone is up-to-date with Hollywood.

Extend your horizont.
edit on 8-11-2018 by verschickter because: (no reason given)