posted on Nov, 5 2018 @ 04:47 PM
link
I've heard several times in the last few months that the GOP is "fear-mongering", many variations on the theme on this forum that Conservative voters are afraid of women having equal rights, afraid of Brown people, afraid of election irregularities, etc, etc


I find this highly ironic in light of data points such as "One out of four students met criteria for clinically significant symptoms related to the election... The high level of event-related distress is concerning because elevated symptoms of event-related stress are predictive of future distress and subsequent PTSD diagnoses." Data from that study indicates campus Dems have more than twice the IES (impact of event score) than campus Republicans, scoring over 26 on average.

"Republicans and Republican leaners are 25 percentage points more likely than Democrats and Democratic leaners to say they are very or somewhat confident that election systems in the U.S. are secure (59% vs. 34%)" Pew

"Democrats are 50% more likely than Republicans to say they’re eating their feelings as a result of the current political climate.
...
Political pain points have been driving Dems to drink more, at a 2-to-1 ratio over their counterparts in the GOP." YouGov Poll


Who is really the party of fear this season?

bigfatfurrytexan
+22 more
posted on Nov, 5 2018 @ 04:49 PM
link
The platform for the DNC is projection. They do various things like stoke fear, stoke racial divide, etc, and blame their political opponents of it.

Look at the Russia thing...turns out it was the DNC that colluded with Russia.

They are the worst of what they accuse.

I don't generally find the GOP worth a bucket of warm spit, but the DNC has become so loathsome, it's hard to believe I could find a D candidate worth casting a vote for in a national election. That's bad for America.

I rarely vote for either party. Mostly out of spite. Even if i feel like voting.

Perot proved to me it was all dog and pony show. I just don't want to lend my support to that.

It amazed me then, and does now, that people can let their "fears" rule their lives like this.

Letting fear decide things is a sure way to screw it all up, and make things worse.

Clearly the GOP runs on fear. They're entire platform for this upcoming election is to be afraid of the brown people INVADING America. That's it. That's all they got.
edit on 5-11-2018 by Swills because: (no reason given)

Politics... we all lose.

Who cares about the booming economy and championing individual rights? All we care about is brown people (even though many of us are brown. Shhhh, it's a secret)


I admit I looked down on Ross Perot as a gimmick candidate, but he was so right on so many things in retrospect. And you're right, they turned it into a show and minimized his campaign because he wasn't part of the machine. Like they have done again recently.

For several years I stopped voting because I believed it was all rigged, (I still think it is in California) But I dusted off my ballot to vote for Trump., and I never thought he could win. But look what happened.

posted on Nov, 5 2018 @ 05:06 PM
link
Is it still Halloween? If you need a real boogeyman and you take a good long look at what the desperate deranged democrats have been doing since Hillary lost the election the democrats should terrify you.

originally posted by: RadioRobert
a reply to: Swills

Who cares about the booming economy and championing individual rights? All we care about is brown people (even though many of us are brown. Shhhh, it's a secret)


I’m brown and I’m voting Red, white and blue. However tomorrow I will vote straight Republican. Because the Democrats have no platform other than destroying everything the US is based on.

originally posted by: Swills
a reply to: bigfatfurrytexan

Clearly the GOP runs on fear. They're entire platform for this upcoming election is to be afraid of the brown people INVADING America. That's it. That's all they got.


If you call that "clearly" , you got sight problems...
Disclaimer : I am not an ophthalmologist
I am not a veterinarian either , yet I know bullshiite when I see it

posted on Nov, 5 2018 @ 05:15 PM
link
With a Red win, the outsider Trump can get some things done and then next time we can start clearing the Republican end of the globalist swamp with more outsiders.

Of course, permanently defeating the globalist uni-party--as entrenched as they are--is a long shot but for the very first time in my own lifetime there's a chance.

As per the topic: Did anyone see where Streisand said she was eating more pancakes because of her angst and fear? Bingo, big mama.
edit on 5-11-2018 by The GUT because: (no reason given)

This is the best chance for "fundamental change", to steal a phrase, in my lifetime. I hope both parties continue to tear themselves apart, and we get back to some sort of sustainable constitutional republic.

You sound like a forgotten about minority
create a self help group : the gvt will surely subsiddise it !

The platform for the DNC is projection. They do various things like stoke fear, stoke racial divide, etc, and blame their political opponents of it.

Look at the Russia thing...turns out it was the DNC that colluded with Russia.

What? First off, you're too smart to say something like "it was the DNC that colluded with Russia." Secondly, how is that an example of anything?

Thirdly, Trump and his supporters denied any Russian influence in the election at all whatsoever to the point of making up a bunch of disparate, flimsy and often contradictory conspiracy theories.

And really, how can you deny the fear mongering? He kicked off his campaign demonizing illegal immigrants, he transitioned for a time into fear mongering about Muslims and now the GOP as a whole is pushing fear of anyone on the Left.

That's objective reality. This is from last year: 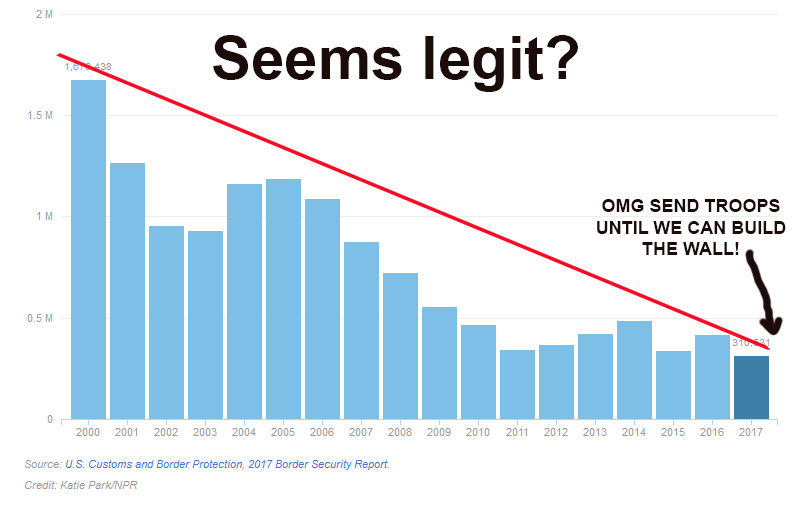 And keep in mind, this is two years into his presidency. How long is he going to milk this bull#?

I always thought the choices on the paper ballots were just different flavors to appeal to different demographics.
It was like ice cream made from seaweed that was supposed to be good for us but we were only allowed to pick the flavor.
Getting the issues you feel are important on the ballot in the first place is potentially a more important voting procedure.
I would never trust myself to have the best insight to select issues, but referendum voting should involve the best qualified people that take long term view.

People should be afraid.

The left wants to;

Don't vote or you will lose your hunting license.