The Black Panthers are backing the Georgia candidate for Governor Stacey Abrams !!

They are so serious, they are showing guns to intimidate you !!

Nice bunch of guys I would say 😆 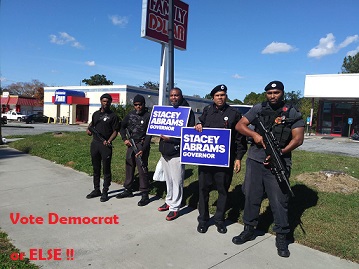 Members of the Black Panther Party marched through the city of Atlanta, strapped with assault rifles and brandishing Stacey Abrams campaign signs.

In a video posted on the group’s Facebook page on Saturday, members of the Black Panther Party are seen marching through the West End neighborhood of Atlanta in support of Stacey Abrams gubernatorial campaign. As they marched, the Black Panthers carried assault rifles and continually shouted slogans such as “black power” and “power to the people.”

Abrams, a former Democratic state representative, is running in a tight election against Republican Brian Kemp, Georgia’s current Secretary of State. The Real Clear Politics average of recent polls shows Kemp up by 1.1 percentage points, well within the margin of error.

Yea, I see this changing votes.

Not the way they want them to go though...

Slinki
+47 more
posted on Nov, 4 2018 @ 07:08 PM
link
Imagine if it were a group of white men, brandishing assault weapons and screaming "White Power" or some such tripe. We'd be strung up and ostracized and more than likely thrown in gitmo for "Domestic Terrorism"
Double standards much?

So white conservatives showing up armed at rallies, protests, or taking over federal buildings is good.

Black men showing up armed to protect someone is bad?

Just look at the crime statistics and don lemon. They'll save you from those murderous crackers.

If they try this on Tuesday, they will be rolled up very quickly.

I don't believe people are aware just how much security will be in place ... and most of it will be undercover.

This is one election where these tactics will fail miserably.

originally posted by: cynicalheathen
Do they know that Stacey Abrams plans to take away their "assault rifles"?

You remind me of an old boat I had. A lot of smoke and butbutbutbut and never really went anywhere.


They are so serious, they are showing guns to intimidate you !!

Does this mean you are now for gun control?

originally posted by: cynicalheathen
Do they know that Stacey Abrams plans to take away their "assault rifles"?

If it was in my powers to do so, you would have won the internets tonight for that post.

They have legal open carry permits and are members of the NRA and NAACP at the same time. *mind blown*

Nobody is firing a shot, it's all circus and peanuts. It made their candidate look bad just like a militia showing up with rifles to promote a Republican candidate would look bad. Keywords: Trashy and tasteless.

Carcharadon
+19 more
posted on Nov, 4 2018 @ 07:17 PM
link
Are the white conservatives ultra militant supremacists advocating for the overthrow of another race and creating an African country inside the continental USA.

No they are not.

The Black Panthers are a racist, misogynistic, Jew hating gaggle of scumbags.

They are the black version of the KKK. KKK, the white militant arm of the Democrat Party.

Funny how the right has a dwindling number of neo nazis on the far, far fringe of the party but the Democrats have Antifa(Communist pigs), Black Panthers (racist, supremacist group) and La Raza (racist, militant, supremacist group) and the far, far left Enviro-Nazis like Bill Ayers under their banner AND fully embrace them and yet the right is somehow the racist side of politics.

Damn I hope you and your idiot fellow travellers got destroyed on Tuesday.

originally posted by: grey580
a reply to: xuenchen


They are so serious, they are showing guns to intimidate you !!

Does this mean you are now for gun control?


It's called hypocrisy... men with guns telling you to vote for the candidate that wants to ban that particular style of gun.

Guessed you missed the nuance... happy to have helped you.

They were just showing the guns that will be taken away once the left is in power.

Good for another 10,000 republican votes.

originally posted by: roadgravel
I wonder if in a decade the country will be voting with guns.

They will call it "The Purge"