posted on Oct, 31 2018 @ 06:36 PM
link
This is the first document describing how Freemasons came about, www.sacred-texts.com...
This website is also a gem for the serious researcher and has everything.

Be aware of Augustus, he´s the evil one.

How would know that? Are you a freemason?

Someone with answers will soon arive at your door.

Please don´t ask any questions and breath through that yellow cloth you will be handed. Everything is prepared and accounted for.

No, i research and do practical, i dont join a club so someone can tell me what to believe.

posted on Nov, 1 2018 @ 08:09 AM
link
Imagine what it was like to write back then. You couldn't do a google search, you couldn't copy and paste. You either had to have an original, untainted thought that you were able to eloquently put to paper without error, or have a collection of well thought out notes which would take an immense amount of time to write and look over when called upon. Some of what you wrote would have to be memorized and kept mentally intact over however many days, weeks, months or years until you needed to pull that information from your mind.

Looking over some of the context of the provided document, it mentions King Athelstan, who appears to have been an English King from about 924-939 AD.

I believe "Euclid" is referring to a Greek geometrist who did some teaching in Egypt way back in 300 BC. A very interesting geographical and historical connection, no doubt.

Elements Title page of Sir Henry Billingsley's first English version of Euclid's Elements, 1570 (560x900).jpg The frontispiece of Sir Henry Billingsley's first English version of Euclid's Elements, 1570 Author Euclid Language Ancient Greek Subject Euclidean geometry, elementary number theory, incommensurable lines Genre Mathematics Publication date c. 300 BC Pages 13 books The Elements (Ancient Greek: Στοιχεῖα Stoicheia) is a mathematical treatise consisting of 13 books attributed to the ancient Greek mathematician Euclid in Alexandria, Ptolemaic Egypt c. 300 BC. It is a collection of definitions, postulates, propositions (theorems and constructions), and mathematical proofs of the propositions. The books cover plane and solid Euclidean geometry, elementary number theory, and incommensurable lines. Elements is the oldest extant large-scale deductive treatment of mathematics. It has proven instrumental in the development of logic and modern science, and its logical rigor was not surpassed until the 19th century. Euclid's Elements has been referred to as the most successful[1][2] and influential[3] textbook ever written. It was one of the very earliest mathematical works to be printed after the invention of the printing press and has been estimated to be second only to the Bible in the number of editions published since the first printing in 1482,[3] with the number reaching well over one thousand.[4] For centuries, when the quadrivium was included in the curriculum of all university students, knowledge of at least part of Euclid's Elements was required of all students. Not until the 20th century, by which time its content was universally taught through other school textbooks, did it cease to be considered something all educated people had read.

Interestingly, as the quote above references, Euclids teachings of geometry echoed through classrooms and universities for centuries after his time. It found its way into the "Quadrivium", which was a book composed of numbers, geometry, music and cosmology. Talk about having an impact on humanity! I may have to give this book a read. 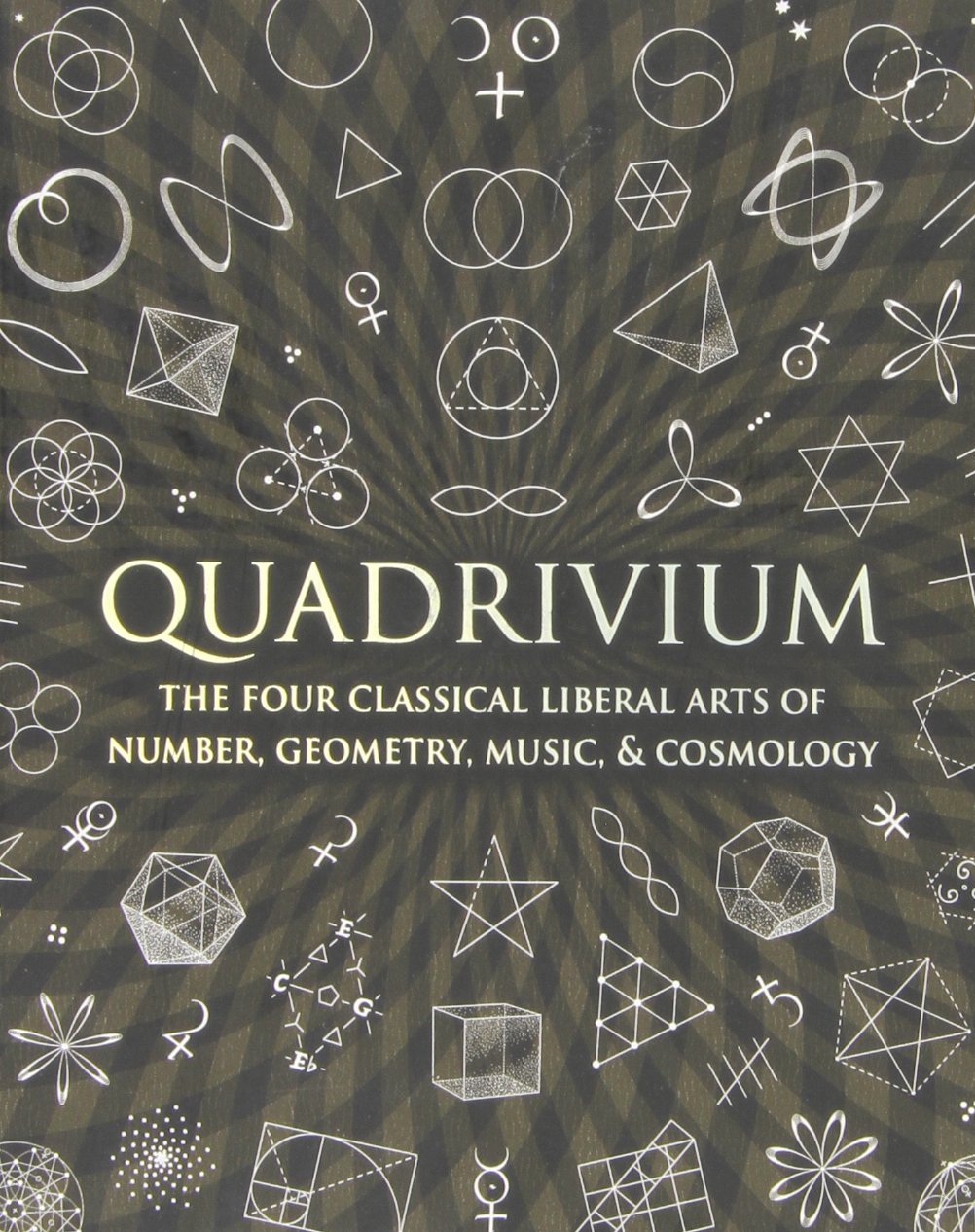 This member gave a great rundown of the Quadrivium.

Being honest, I think your post (though I would encourage you to add more context to the OP), and the post I linked here, deserve more attention. Some great discussion could occur on these topics.

For sure. It does deserve more attention not least by me, I'm working now and in my rubbish phone so can't give it the attention it deserves at the moment, thanks for taking part and i will gladly read through your link, just a bit harder for me to research the way id like on my pc, but can wait.
cheers

originally posted by: ManyMasks
a reply to: Assassin82

For sure. It does deserve more attention not least by me, I'm working now and in my rubbish phone so can't give it the attention it deserves at the moment, thanks for taking part and i will gladly read through your link, just a bit harder for me to research the way id like on my pc, but can wait.
cheers


I know how that goes. It is difficult to manufacture content on this site through mobile. Which, I guess, fair enough. The content here can consist of some pretty complex stuff; worthy of more that a few minutes here and there.

No, i research and do practical, i dont join a club so someone can tell me what to believe.

WOW so you nothing of Freemasonry then.

Hmm, I'm no where as knowledgible as AM or KSigmason.

But from what I was told in my lodge, freemasonry came about in the mid to late 1700s, with references dating back to about 1650 or so I can't comment on all the jibberish in that article except for:

Not to lie with thy master's or fellow's wife or concubine under penalty of serving another seven years of prenticeship.

That's bollocks. We're all for keys in the bowl at the end of ladies' nite.
edit on 1-11-2018 by noonebutme because: (no reason given)

From the thread you linked

The dyad appears in music as the ratio two to one, as we experience a similar tone an octave higher or lower, at twice or half the pitch. In geometry it is a line, two points, or two circles.

That´s exactly what I´m currently on to with the goosebump spektrometer/graph! You won´t believe how much your post helped me with this. Fascinating.

The Halliwell Manuscript, also known as the Regius Poem, is the first known Masonic text. It consists of 64 written pages in poetic form. The poem begins by evoking Euclid and his invention of geometry in ancient Egypt and then the spreading of the art of geometry in "divers lands." This is followed by fifteen points for the master concerning both moral behavior (do not harbor thieves, do not take bribes, attend church regularly, etc.) and the operation of work on a building site (do not make your masons lab our at night, teach apprentices properly, do not take on jobs that you cannot do etc.). There are then fifteen points for craftsmen which follow a similar pattern.

The general consensus on the age of the document dates its writing to between the late 1300s and the middle of the 15th century, and from internal evidence its author appears to have been a West of England clergyman. The manuscript was recorded in various personal inventories as it changed hands until it came into possession of the Royal Library, which was donated to the British Museum in 1757 by King George II to form the nucleus of the present British Library.

During this time, the document was generally described as a poem of moral duties. The significance of the document as relating to Freemasonry was not realized until it was featured in an article on Freemasonry by James Halliwell in 1840. The text of the document states that Freemasonry was brought to England during the reign of King Athelstan from 924 to 939. The manuscript is presently held by the British Library in the Royal Manuscript Collection, catalogue reference 17 A. I.

I've also written on King Athelstan.
edit on 1-11-2018 by KSigMason because: (no reason given)

originally posted by: noonebutme
That's bollocks. We're all for keys in the bowl at the end of ladies' nite.

Some how I always end up with Baphomet at those.

At least he has boobs...

posted on Nov, 1 2018 @ 03:44 PM
link
a reply to: ManyMasks
That's the archaeological date they use for the dating of their Lodge, though in that time it was purely operative Masonry...which is still amazing to see the continuation. The earliest record is dated to 1599.

I just did a presentation on Mark Masonry which is considered to be the degree that bridges operative and speculative Masonry.

Yeah i know, but it makes you wonder, i once heard that the masons in various forms date back to King Solomon, who of course was a great magician. The secrets they have in my opinion are related to ancient magic, and Baphomet for example is a common figure that is used in rituals, but Baphomet isn't evil, it's just not Jesus.
I'm open minded to anything tbh
Mason conspiracies are fascinating, they are just becoming less talked about these days.
Tell you what, it would good if Mason 33s
Did have big secrets, cause it would be advised to let one out as it might keep the whole "institution" going, getting stronger.

originally posted by: verschickter
a reply to: Assassin82

From the thread you linked

The dyad appears in music as the ratio two to one, as we experience a similar tone an octave higher or lower, at twice or half the pitch. In geometry it is a line, two points, or two circles.

That´s exactly what I´m currently on to with the goosebump spektrometer/graph! You won´t believe how much your post helped me with this. Fascinating.


That's great my friend! I'm happy I could help. Though, to be perfectly honest, I'm not big into music. I like an occasional tune here and there, but it's never reached out and grabbed me like it has others. My Mom and brother are both HUGE fans of music though.

I hope this helps you with your experiment. Best of luck!

Experience is the best teacher. You can read all you want about a subject matter, but those writings are a spectrum of other people's words. The best scenario, the words are from someone else's direct experience. At worst, the words are based on someone's fantasy, with no connection to reality. Most often, it is somewhere in between.

Joining Freemasonry does not result in being told what to believe, at least where I'm from. To the contrary, Freemasonry welcomes people of all beliefs, except that of atheism (unless your in France). In fact, Freemasonry encourages the exploration of all beliefs, without persecution. If you enjoy the sacred texts website, you would certainly enjoy a good Freemason library.

Intellectual discourse is a fabulous way to rid the world of ignorance.

posted on Nov, 1 2018 @ 10:59 PM
link
a reply to: ManyMasks
The central myth of Freemasonry surrounds King Solomon's Temple, but there is no evidence that the modern fraternity has anything to do those operative workmen.