An alleged scheme to pay off women to fabricate sexual assault allegations against Special Counsel Robert Mueller has been referred to the FBI for further investigation, a spokesman for the special counsel’s office told The Atlantic. “When we learned last week of allegations that women were offered money to make false claims about the Special Counsel, we immediately referred the matter to the FBI for investigation,” the spokesman, Peter Carr, told me in an email on Tuesday.

The special counsel’s office confirmed that the scheme was brought to its attention by several journalists who were told about it by a woman alleging that she herself had been offered roughly $20,000 by a man claiming to work for a GOP activist named Jack Burkman “to make accusations of sexual misconduct and workplace harassment against Robert Mueller.” The woman told journalists that she had worked for Mueller as a paralegal at the Pillsbury, Madison, and Sutro law firm in 1974. The firm has not returned a request for comment about whether the woman actually worked there.

She continued: “In more of an effort to get him to go away than anything else, I asked him what in the hell he wanted me to do. He said that we could not talk about it on the phone, and he asked me to download an app on my phone called Signal, which he said was more secure. Reluctantly, I downloaded the app and he called me on that app a few minutes later. He said (and I will never forget exactly what it was) ‘I want you to make accusations of sexual misconduct and workplace harassment against Robert Mueller, and I want you to sign a sworn affidavit to that effect.’” The man “offered to pay off all of my credit card debt, plus bring me a check for $20,000 if I would do” it, she wrote. “He knew exactly how much credit card debt I had, right down to the dollar, which sort of freaked me out.”

So a little bit of background. 10 days ago, Jack Burkman, Republican lobbyist and activist, posted a video on Facebook claiming that he had information that Robert Mueller had sexually harassed women in the workplace and that he was a raging alcoholic.

Three days prior to that, a number of reporters received an email purporting to be from a woman alleging that she had been approached by a representative of Burkman and offered in total, what appears to be $64,000 (pay off $34k in debt, $20k in cash + $10k "bonus") to attest that Robert Mueller had sexually harassed her in the 70s. Here's the email, tweeted by Yashar Ali (full-size image): 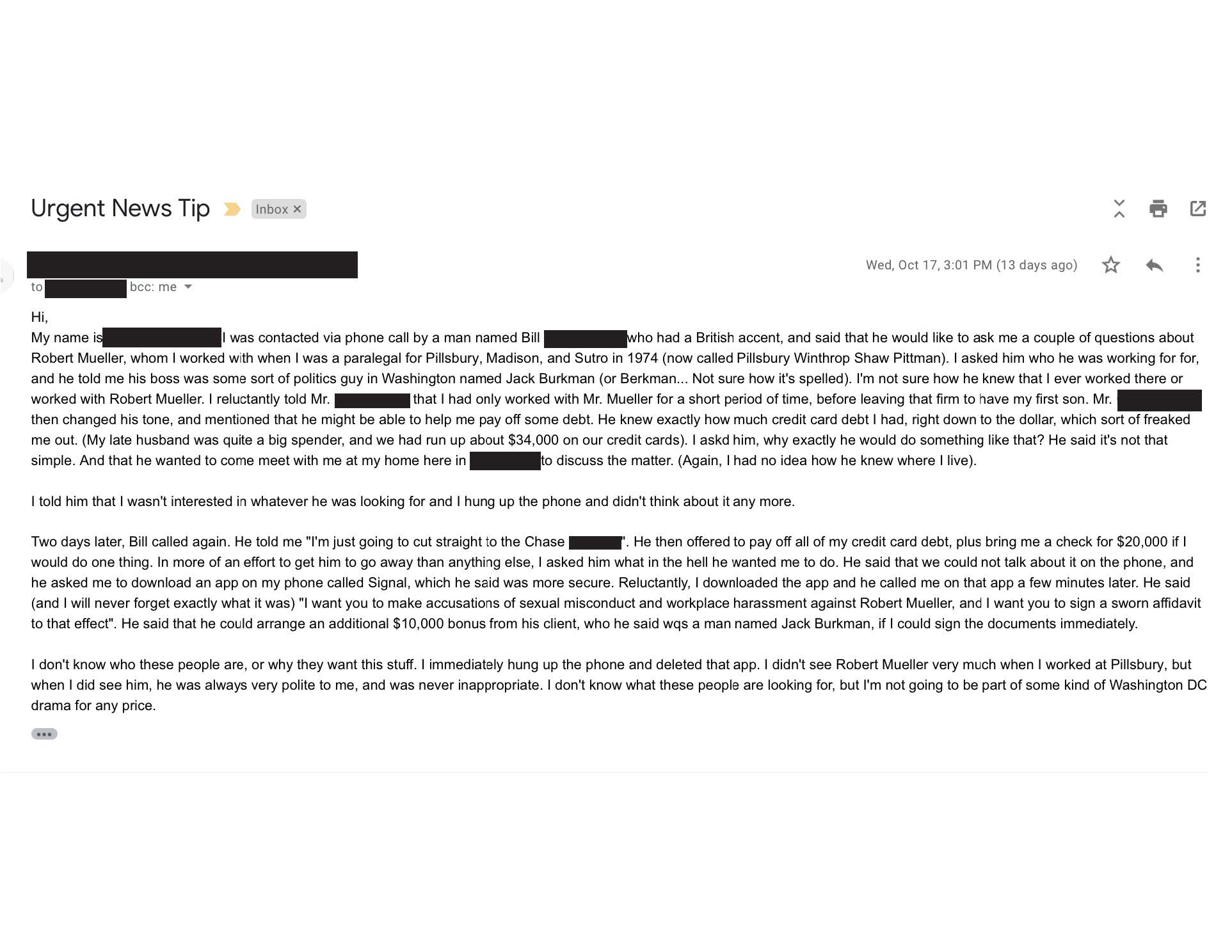 The woman refused to provide contact information or speak to reporters. She did however provide at least one of these reporters with the phone number for Burkman's alleged intermediary. Scott Stedman reached out to this man. Here are screen caps from one of the communications tweeted by Stedman: 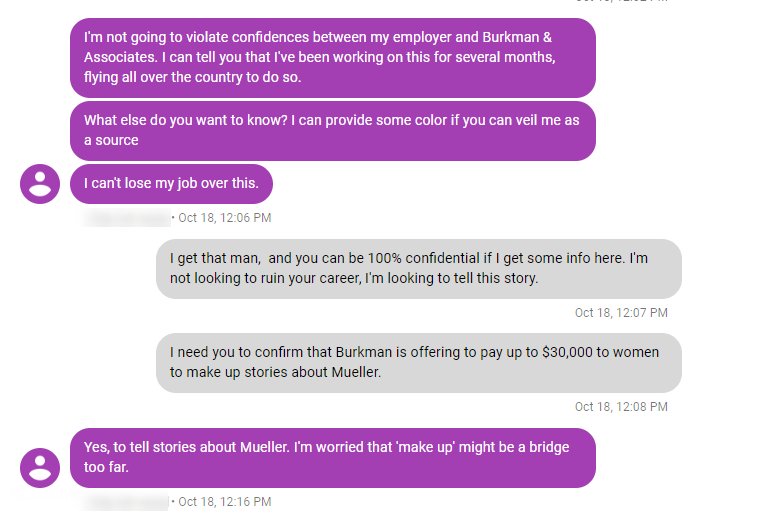 He was not able to confirm the man's identity. The conclusion he came to was that this was some sort of stunt intended to discredit the media. He remained silent about it until yesterday. In communications with Trump super fanboy Jacob Wohl (background here), who appears to be involved with Burkman and probably others, it became clear that whatever they were cooking up, they were going ahead with it which caused Stedman to break his silence last night on Twitter.

Now this afternoon, Burkman made this announcement (on Twitter):

Some sad news. On Thursday, November 1, at the Rosslyn
Holiday Inn at noon, we will reveal the first of Special Counsel Robert
Mueller's sex assault victims. I applaud the courage and dignity and
grace and strength of my client.

Forgive me I am terrible at linking to tweets here on ATS, but it looks like Stedman has tweeted that the woman who emailed journalists about her being offered money to make false allegations against Mueller is herself nowhere to be found, and apparently didn't work at the firm she says she did...

Stedman says "this woman doesn't appear to exist" and that the phone number of the supposed 'intermediary' has been disconnected. Something is off about all of this...

"I learned it from watching you!"

I do not condone false allegations.

posted on Oct, 30 2018 @ 02:25 PM
link
Mueller doesn't need anyone to look at a scheme to discredit him, his less than stellar past speaks volumes about his character

Have you noticed that everything the left gets accused of is denied by the media, and then the media accuses the right of that very thing? One thing is ALWAYS constant, the media runs cover for the left and the media is always on the offensive against the right.

The differs from Blasey Ford's gratis legal and travel arraingements and million dollar GoFundMe account how? Perhaps the FBI should look into that, too...

Maybe the next freaking Supreme Court nominee can just either get the job or not...without being falsely accused of rape.

This is the bed that the opposition to Trump made.

By any means....too bad the activist got caught. He should have tried to frame Mueller with murder. That's next.

There is a new playing field. Let's just play with our lives and our country. There are no consequences.

The other guys will say "darn it" and stop trying to succeed at life. Play dirty. There are NO consequences...until fair players get wise and start playing dirty too.

Says right there in your source the allegations arent "made up"/ false.

Your title is misleading.

Have you noticed that everything the left gets accused of is denied by the media, and then the media accuses the right of that very thing? One thing is ALWAYS constant, the media runs cover for the left and the media is always on the offensive against the right.

That is interesting.
I will have to look into that.

posted on Oct, 30 2018 @ 02:37 PM
link
It's incredible how much work you put into your thread and it gets little attention, but a similar one linking to a trash site and with unrelated pictures in it gets ten times more attention.

posted on Oct, 30 2018 @ 02:41 PM
link
As someone who leans conservative and Republican more than Democrat, I am tired of this kind of politicizing of sexual harassment, assault and other variation from both sides. I have never voted for a party, instead vote on issues and where each candidate stands. Lock him up if it's a stunt, and make an example of all involved.

Watching what happened to Ronnie Jackson after President Trump nominated him for VA Secretary was disgraceful. None had anything bad to say during his tenure as White House Physician during President Obama's Administration, however, as soon as he gave a clean bill of health to President Trump, he became the target of every anonymous accusation there was to be made. I have no idea if what was alleged was true or not, but do feel after his service he deserved at the least an opportunity to address the accusations.

The Kavanaugh debacle is open for debate, never should have occurred the way it did. This must stop. Otherwise the weaponization of these anonymous accusation will only get worse. We must make changes to our political system, everything from how they campaign to how much money and where it comes from, to holding everyone accountable for despicable acts of sexual assaults to false allegations. Congress should not be allowed to secretly settle accusations and tax payer money should never be used to do it. If this is some kind of dirty game then they need to be held accountable
edit on 10/30/2018 by DJMSN because: correction

originally posted by: avgguy
Why are you victim blaming? We must believe all women.

We must believe all women that accuse conservatives. The accusation itself, is proof of guilt.

Women that accuse liberals however, were either asking for it, or are being paid by conservatives.

Will the police begin asking rape victims of their political preference, to determine whether or not the victim's testimony is credible?

Stedman says "this woman doesn't appear to exist" and that the phone number of the supposed 'intermediary' has been disconnected. Something is off about all of this...

The "woman" who started this entire thing doesn't appear to exist. The law firm says she never worked there. The phone number of the intermediary who allegedly offered the cash has been disconnected.

So does the fbi usually investigate slander cases or would this be libel?
Or is this defamation of character?
Is this usually the fbi's jurisdiction?

Has it been confirmed she didn't work where she said she did? I'm totally willing to believe this is another slimy lawyer hoax, but if the woman who claims she was offered money doesn't exist it's not looking good for Meuller and the MSM who ran with this aspect first.