What is the point in voting if the electoral college decides the president?

posted on Oct, 30 2018 @ 08:46 AM
link
I've been reading up on it since Trump became president but failed to win the popular vote, and I really don't understand how such a system ever came into being. It doesn't seem like democracy to me, especially when I read this...


There is no Constitutional provision or Federal law that requires Electors to vote according to the results of the popular vote in their states. Some states, however, require Electors to cast their votes according to the popular vote. These pledges fall into two categories—Electors bound by state law and those bound by pledges to political parties.

archives.gov
The whole thing seems ridiculous to me, either the presidential candidate won most votes or they didn't, this electoral college thing just smells like a big scam to me. I wouldn't support such a system in my country - Shouldn't Hilary be president because most people voted for her?

...what can say though, my head of state is decided by birthright, how's that for a completely undemocratic system...I'd vote the monarchy out in a heartbeat.


I feel like I answer this question every four years to many people so it's nice to see it in the two year mid-break. The reason the electoral collage makes sense in America:

When we were founded, the idea was not as "One Nation State" but of "Fifty separate Nation States United under one Banner" The idea was always to have 50 separate states acting somewhat independently while having one voice for the outside world. The original idea would be a federal system to govern trade, war and treaties with outside countries, but within our own borders we would act as 50 separate states.


Now with that said, The reason the electoral collage makes sense is because it gives every state a voice in the outcome of who the president will be.

IF it was a popular vote only, all the campaigning would happen in California, New York, Florida and Texas, and further then that, in their populous cities only. America would become tyranny by the populated cities, no one would care about Wisconsin, Alabama, Utah or other states without such a large population. Which would mean all the money going towards these cities as a candidate can say "My policy is to give all our money to California, New York Florida and Texas, and Alabama should be taxed at 100%!!!" that of course is an exaggeration but you get the point.


Our electoral collage system works beautifully, and most states DO bound their electors, and in any respect America is build and several systems of checks and balances, and the electoral system is just one of those checks and balances. It ensures all of America has a vote, it ensures every state has a voice, and it's THE reason why I always vote because I know I have a voice.


I hope this answered your question but to go on further "When Hillary won the popular vote" that was because of the millions in California... I don't want California deciding who is President.

originally posted by: CornishCeltGuy
It doesn't seem like democracy to me...

Because it isn't, it's a representative republic.

one of the important reasons for the electoral college is that it disperses "voting power" in place with high population density, such as NYC or LA. Otherwise, those "city slickers" would be the only ones choosing the elected leaders.

At least that's the way I've understood it. 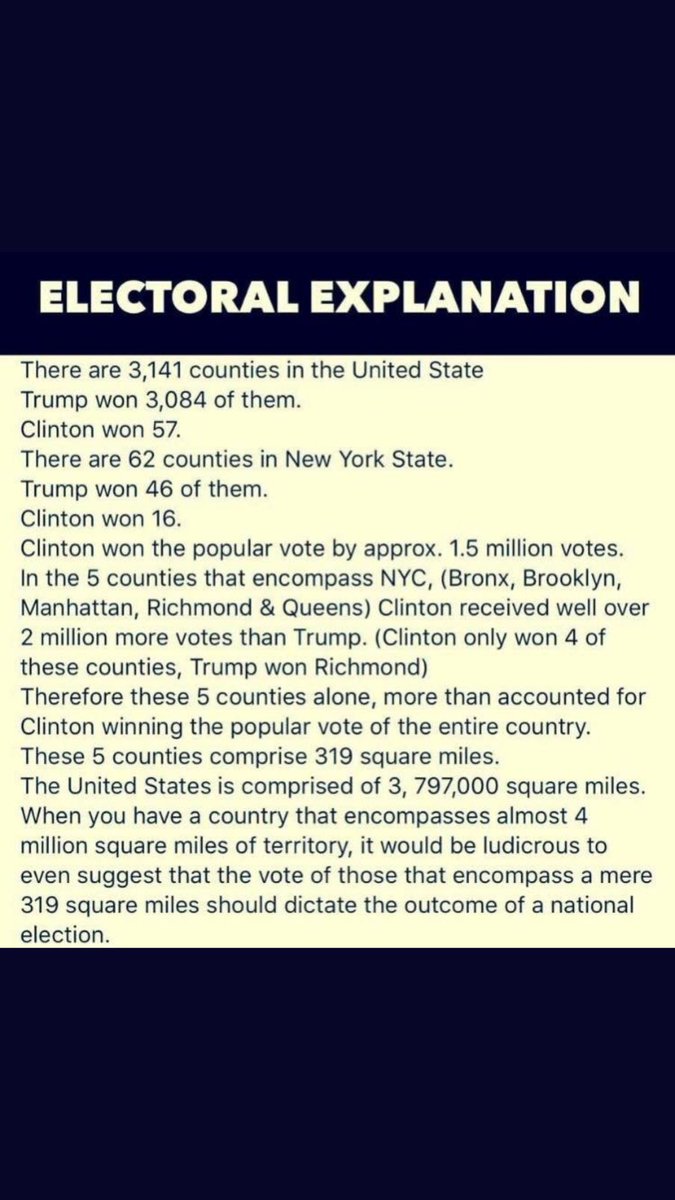 This explained it for me.

CornishCeltGuy
+8 more
posted on Oct, 30 2018 @ 09:02 AM
link
a reply to: PsychoEmperor
Thanks for the excellent answer
I think I get it now, and if the electors are bound to vote as the citizens of the state voted then that makes more sense.
End of thread I guess lol, I asked and got the answer.


originally posted by: CornishCeltGuy
It doesn't seem like democracy to me...

Because it isn't, it's a representative republic.

Yep we are a Republic.

posted on Oct, 30 2018 @ 09:05 AM
link
In simple terms
States elect people president....State of Ohio voted Trump.... The state of Michigan, voted Trump. The people of a state are voting.... to decide who gets their states vote.

If not for the electoral collage..... 5 states alone would choose for the 45 other states who the president is, for no other reason than population density...... and that is a recipe for disaster. Each state has an equal voice, regardless of population.

I believe that we need the electoral collage.

Otherwise the elections would all be decided by the few mega cities that we have.

Rural america needs to have a voice as well.

posted on Oct, 30 2018 @ 09:09 AM
link
Also the Electoral college was specified in the constitution. Some of the states have winner take all like California which has 55 electoral votes. pretty good explanation can be found here. youtu.be...


The founders really were some forward thinking smart people, IMO.

posted on Oct, 30 2018 @ 09:12 AM
link
I find it ironic liberals complaining that popular majority doesn't pick the President.

Liberals push their agenda through the court systems with law suits and bench rulings. The majority of the USA doesn't want or agree with most of the social justice issues liberal judges push. How many times did Ultra liberal California vote against gay marriage?


No worries, your explanation was solid.

You're welcome! I would like to see more electors bound but I would only give the states the power to bound their own electors. As it stands now 29 states and the district of Columbia are bound. For the most part electors "do as their told" but I agree. Luckily there are 538 Electors, so a few acting out against their states, wouldn't(shouldn't) affect an election greatly, and IF IT DID, I'm sure we'd have a revolution in our hands, or at the very least a revote, with those specific electors being fined and/or Imprisoned.


In the past some electors have acted against what they were told and it never affected the election and they were fined by their states. Usually the "acting out" is a simple refusal to vote.

This explained it for me.


In essence, electoral votes are weighed by acreage/consensus population data, so that in effect the aggregate power of voting is leveraged by total landowners factored across the relevant states total population rather than solely on just actual numbers of people.