page: 1
25
<<   2 >>
log in
join
share:
theantediluvian
+2 more
posted on Oct, 23 2018 @ 03:13 AM
link
One of dozens of wrecks recently discovered by the Black Sea Maritime Archaeological Project is being promoted as the oldest intact shipwreck to be found.

The wreck was found about 50 miles off the coast of Bulgaria in the eastern Black Sea. It's said to be a 75-foot merchant vessel that has been carbon dated to about 500 BCE, making it around 2,500 years old. Here's what looks to be a composite image of a laser scan of the wreck with an ROV superimposed, released by the Project (via NY Post): 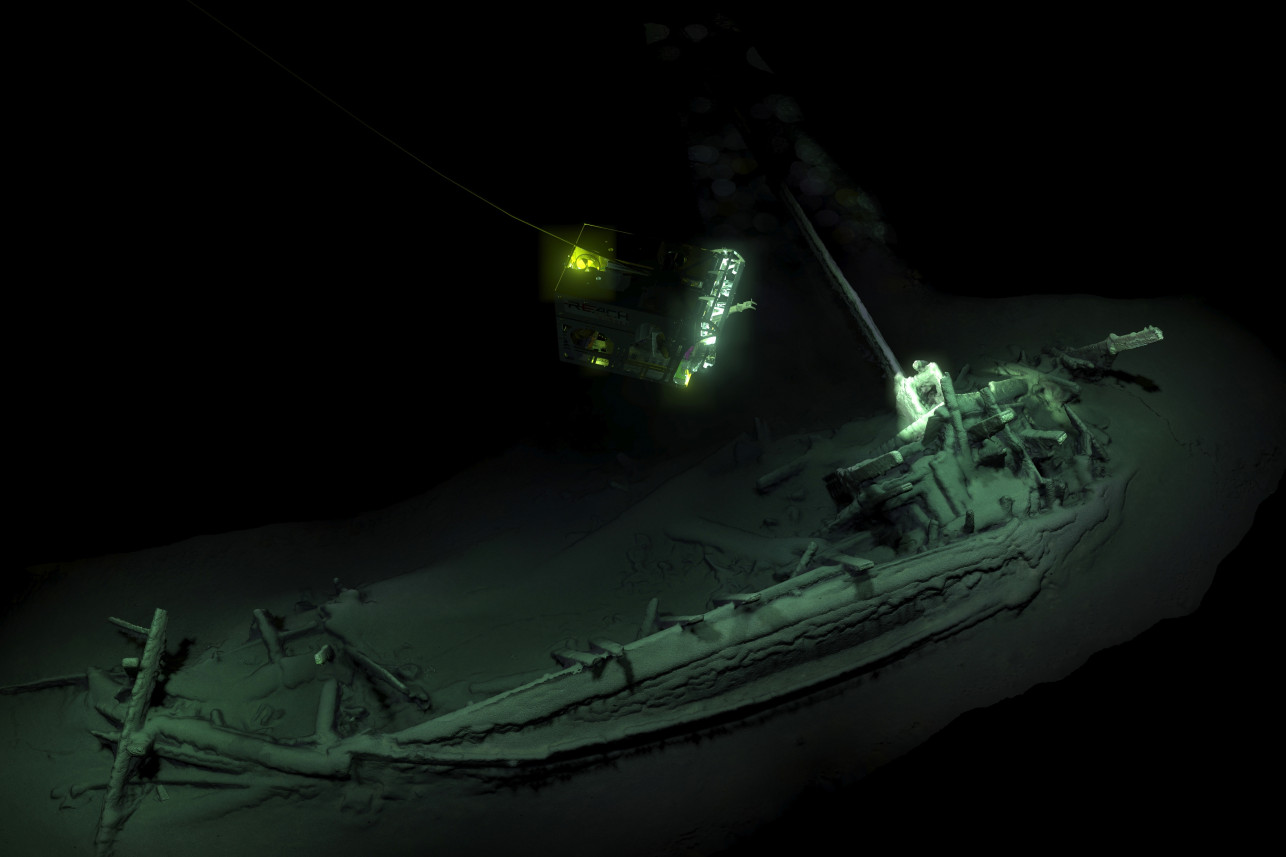 The few sources there are say that it has been salvaged. The team is presenting their finding at the British Museum today, where they will apparently be airing a two hour documentary.

Carbon dated to 500 BC, the oldest vessel is 2,500 years old and resembles the ship depicted in the famous Siren Vase, now at the British Museum.

The second oldest of the 72 vessels recovered dates back to 200 AD.

Dr Kroum Batchvarov, who worked on the project, said: "We have complete vessel, with the masts still standing, with the quarter rudders in place.

"It is an incredible find. The first of its kind ever."

Because the Black Sea has no oxygen, the vessel has been so well preserved that even the monkfish bones, showing what Romans were eating, are intact on its deck.

"We even have the coils of line, of rope still as the bosun left them in the stern when the ship went down," Dr Batchvarov added. "This is unique."

Infographic from The Times: 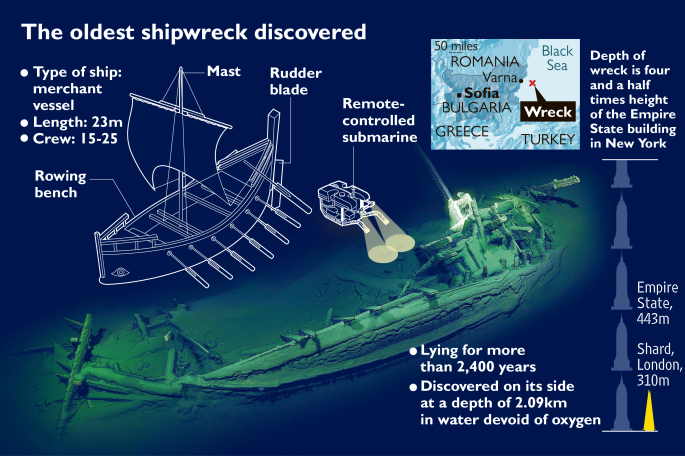 And from The Guardian:

“A ship surviving intact from the classical world, lying in over 2km of water, is something I would never have believed possible,” said Professor Jon Adams, the principal investigator with the Black Sea Maritime Archaeology Project (MAP), the team that made the find. “This will change our understanding of shipbuilding and seafaring in the ancient world.”

The ship is believed to have been a trading vessel of a type that researchers say has only previously been seen “on the side of ancient Greek pottery such as the ‘Siren Vase’ in the British Museum”. 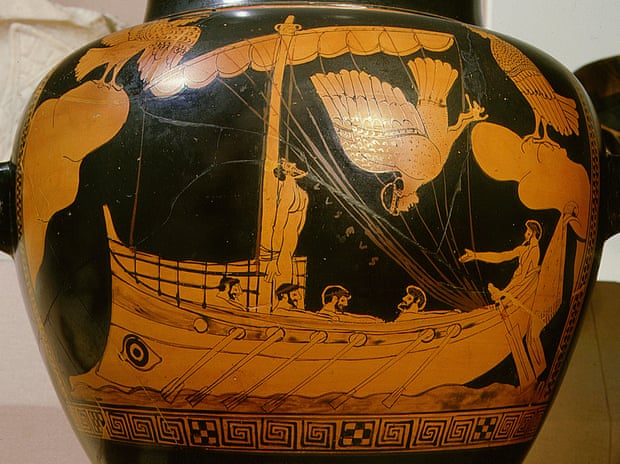 That work, which dates from about the same period, depicts a similar vessel bearing Odysseus past the sirens, with the Homeric hero lashed to the mast to resist their songs.

The team said the data would be published at the Black Sea MAP conference at the Wellcome Collection in London later this week.

Not sure about displacement.

What I'm really curious about is how they went about salvaging it.


Ship itself looks quite impressive, but will it yield historical insights such as the Uluburun (1400BC)?


I bet it went down in a bad storm where waves finally filled it up and pounded it under.

originally posted by: Phage
a reply to: theantediluvian


Well I'll be, and all this time I thought they used their pricks

posted on Oct, 23 2018 @ 07:49 AM
link
In the video it shows divers around the ship. It could not be two km deep if there are divers. The video could be showing something else, but it appears the guy is talking about that ship. You would need special equipment to go two km deep.

I am not a diver, but I know that you cannot dive below say four hundred meters max.

I think that clip must be one from one of the other shipwrecks the project has discovered.

The depth is why I was curious how they salvaged this thing. From what I can gather, even with a hard suit, max depth appears to be less than half a mile.
edit on 2018-10-23 by theantediluvian because: (no reason given)

It'll be an interesting documentary. Is there a release date on that, or did I just miss it.


Ship itself looks quite impressive, but will it yield historical insights such as the Uluburun (1400BC)?

Good question. Details in the articles I could find yesterday were sparse. No mention about cargo.


Details in the articles I could find yesterday were sparse. No mention about cargo.

so the wreck is only 'discovered'....

a 'Salvaged' wreck means cargo/booty/artifacts were recovered from the wreck...up to including the raising of the wreck itself from where it sat on the seafloor... ~only then can a wrecked vessel be deemed 'Salvaged' ~

example, the TITANIC was Salvaged in part, by all the artifacts recovered, but remains on the ocean bottom

but ancient Norway ships have been discovered, then 'salvaged' to be put into a museum as a relic from history

posted on Oct, 23 2018 @ 01:51 PM
link
It's been national news in the UK today. The BBC had someone on saying it won't be salvaged because it's too fragile to work with. I think stubborn ingenuity will be dissatisfied leaving it as it is and great minds (and budgets) will be sharing ideas already.

In the articles I read, it was specifically stated that the wreck was salvaged which raised all sorts of questions for me given the depth and the fact that it's a 2,500 year-old wooden ship.

I'm having a hard time imaging it being successfully salvaged with ROVs.

There was a quote from one of the team members in article were he said that they'd initially planned to leave the wreck where it was but then they got the carbon dating results and determined it was the oldest intact wreck discovered. So maybe there was some confusion about what had been done vs what they'd like to do.

Wow , what a great find.
The level of preservation is incredible , looking forward to the excavation and discovery of her cargo.

It was the last test of Archimedes' failed "Boomerang Ballista"

I'm sure they are making leaps and bounds but to find what is buried at the bottom of the seas and oceans is very interesting, need to win the lotto and spend many moons out or under the water as I'm sure it's expensive.

originally posted by: Phage
a reply to: Trucker1

Salvaging a wreck is akin to exhuming a grave. I think wrecks should just be left where they are in honour of the brave seafarers that lost their lives.