He was so excited...and because we both love Trump, I thought it could be one of those father/son things we could share which he would remember the rest of his life.

We went early...waited in line for most of the day...ended up 15 feet directly in front of the President...and had an absolutely amazing time together.
IT WAS PERFECT!...and I know we'll both treasure that day and the father/son experience we shared together. 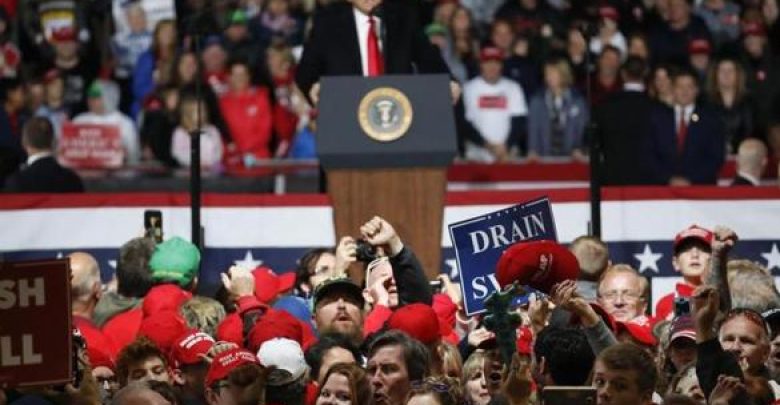 HERE is the problem:

While we were in line to get in...my son REALLY wanted a MAGA hat and, since he didn't have any cash, he asked me if I would buy him one from one of the vendors outside.

He was so excited to have one...and it seemed like everyone else was wearing one...I bought him a hat.
As soon as he got it, it went right on his head...and STAYED on his head the entire rally.
He was so proud to wear it.

As we were leaving the rally, and the fairgrounds...I said: "Okay, you should probably take that hat off now."

He said something along the lines: "No way!...I'm never taking this off, I'm wearing it everywhere."

Thinking of all the violence being directed towards Trump supporters, I said:
" Promise me you won't wear that at work or when you go out with your friends or girlfriend."

My son looked at me and said: "Haven't you always told me to stand up for my beliefs?"

Embarrassed...and till picturing my son getting the s#it kicked out of him by a group of crazy Leftists...I told him I was just worried for his safety if he continued to wear the hat he loves in public.

As I said these things, I felt like a lousy dad...always telling my son to stand up for his beliefs...while still worried for his safety as any father generally is.

Of my two sons...he is not my 'Tough Guy'...he is my gentle, intellectual, idealistic boy...but he loves Trump, he loves his dad, he loves his country...and he loves wearing his MAGA hat.

Am I wrong to fear for his safety?
Was I wrong to express my concerns?

Reluctantly, he said he will not wear it around in public...but I feel like such a hipocrite...and still worry, he may wear it out and be harmed.

Am I wrong to fear for his safety? Was I wrong to express my concerns?

What every good parent does.

I am just happy none of this crazy stuff goes down in my area. I have had a maga hat In back window of my car for a year now never had any problems. My town always seems to be lucky no crazy $here political wise. Surprising since I'm in illinois

posted on Oct, 19 2018 @ 07:59 AM
link
a reply to: IAMTAT
In the week running up to the Brexit referendum my son and I wore "Vote Leave" T-shirts and attracted a mixture of angry stares and support.
I felt proud 'fronting it' with my lad, and it was his first time of being able to vote for anything.
Tricky one for you, I get your concern but I agree, I've always encouraged my son to stand up for what he believes and never bend over.
Okay, we didn't get physically attacked but the hostility was clear, I actually like fighting though if I can justify it, and I'd defend our right to wear those T-shirts anyday.

posted on Oct, 19 2018 @ 07:59 AM
link
The hat is an external advertisement of inner convictions. It not only invites fellow travelers to talk conservative politics, it invites leftist mobs to attack him because of it. Tell him to vote the way he wants but keep the hat for rallies. The responses to MAGA hats and GOP signs by leftists reminds me of the snackbars' response to anything reflecting poorly on the religion of peace.

Not to be an ass, but if my son wanted to wear a MAGA hat I would fully support it. And I would have no fear really because I would feel very sorry for anyone that attempted to remove it from his head. They would regret that moment.

Agree about personal safety. Nazi and KKK don't usually go everywhere with their logos blazing with lg. letters. They'd get their behinds kicked.

It's nothing to do with being proud...great. But it is a violent world out here...sadly. Not everyone shares his enthusiasm.

We don't see TALIBAN or ISIS hats or shirts either for the same reasons worn by middle eastern residents here...

As long as he understands how animosity is....let him wear it proudly...but with the understanding 1/2 the world doesn't feel the same way.

posted on Oct, 19 2018 @ 08:04 AM
link
why buy trouble?
Some of the crazy stuff that happens over there means I would have to be in the mood for a scrap before wearing a MAGA hat. Purely because confrontation is the most likely outcome.
Over here you can wear a vote leave or vote remain shirt without too much nastiness.
Except if there is a demo or something, then the loons come out.

originally posted by: IAMTAT
Am I wrong to fear for his safety?
Was I wrong to express my concerns?

I told my teen daughter she better not ever protest in public, because she might get run over by someone who disagrees with her if she happens to be crossing the street while protesting. Am I wrong for wanting to remove her 1st amendment right to peacefully assemble?

I’ve also tried to keep her from going to places with large crowds, because of the fear of some nut with a gun shooting up the place. She’s been home schooled, so I didn’t have to worry about the school mass shooter, but she’s starting to take classes at the local community college, so now I have to worry about her getting shot to pieces there...


originally posted by: IAMTAT
Am I wrong to fear for his safety?
Was I wrong to express my concerns?


He is more politically articulate and informed than I'll ever be. His IQ is off the charts and I'm proud to watch him debate and discuss politics.
While he is brilliant, he is just NOT a tough guy or a fighter.

posted on Oct, 19 2018 @ 08:09 AM
link
a reply to: SprocketUK
Agreed, it definitely seems more angry and violent in the US political divide compared to over here.
Wearing any political message will always attract attention, It's why me and my lad wore the vote leave shirts, I quite enjoyed fronting the aggression to be honest.

posted on Oct, 19 2018 @ 08:10 AM
link
All I know is that if I ever decided to buy my MAGA hat, I would damn well brush up on my knowledge and facts, be critical about all leftist spin narratives before I decide to wear it 😲

The general leftist isn't really all that knowledgeable of politics, rather, opting for liberal media buzz words and mob mentality. These are relatively easy to deal with debate wise. Even certain accredited and esteemed individuals who's certifications deal in only their craft and nothing beyond can succumb to this fallacious perspective 😌

To be quite honest, the hat is a powerful symbol, imbued with energies from both supporters and haters. In a hyper partisan environment, I would be much more cautious.
edit on 19-10-2018 by Arnie123 because: Heh

My wife made a bunch of pussy hats and sent them to D.C. for the rally a year back.
Kept one
Getting cold here and she put it on the other day. Wanted to wear it out.

Not worth it. Not going to risk having to deal with some asshole cause she is wearing a pussy hat.
I had her take it off.

So I feel you

While he is brilliant, he is just NOT a tough guy or a fighter.

I think he will be fine.

If not I can always loan him my numbchucks.


Can I have it? I'll wear it while I vacuum the house.


Haha yes, I'll admit that, he could pick me up and throw me around easy, he's senior squad tight-head prop for our town's rugby team.
He'd probably defend me these days, and when I'm out with his mates I feel safe as houses, those little boys I watched play rugby from age 6 are all monsters now.
I was in his house recently and the whole scrum pack were there partying, there was over a metric tonne of blokes, I was thinking don't jump around too much or the floor will go through lol

Great questions asked. I don't think their is any hypocrisy in not advertising your convictions which is what wearing the hat would represent. The hypocrisy would be living a life that does not correspond to those convictions.

The reality of wearing the hat to work would be living with additional conflict, drama and distraction in the workplace, which is not why he is there. I guess he could choose if he wants potential conflict at other venues. I agree, in this instance, voting is the thing that matters at the end of the day.


Its amazing how much bigger packs are now. I played prop, lock and flanker through school These days I'd be the Austin Healy type giving it large at the back