posted on Oct, 17 2018 @ 11:38 AM
link
There were 4 victims during the terror attack and 10 during the flash floods. That is one unlucky woman. She has been quoted as saying she feels as though fate is conspiring against her. No kidding!

ATS thread about the terror attack back in March: France: Policeman shot - Hostages taken at supermarket (authored by auroraaus)

That policeman was a hero btw and I don't use that word lightly. He exchanged himself for one of the hostages knowing full well that his chances of survival were slim at best. Trèbes attack: Paris ceremony for hero policeman Arnaud Beltrame

Franc e hit by worst flash floods in 100 years: Pictures of the devastation


I put this thread in "Skunk Works" because there are some additonal details I'd like to mention but that is all very "fringe" and "out there". This region in the south of France, the Languedoc, is steeped in history. It is where the Albigensian Crusade against the Cathars took place. Only 70 km (50 miles) away from Carcassonne is the town of Béziers where 20,000 people (men, women and children) were slaughtered by the crusaders in 1209. It is the origin of that infamous quote: "Kill them all! God will know his own." Six days after the Béziers massacre the crusaders reached Carcassonne...

Rennes-le-Chateau is only 39 km (24 miles) away. The whole region is brimming over with tales, rumors, stories and hoaxes relating to Maria Magdalena and Jesus having lived here, the holy grail, holy bloodlines, UFO's, vast gold treasure, you name it.

This year Carcassonne celebrated the 20th anniversary of becoming a UNESCO listed world heritage site by having swiss artist Felice Varini cover the fortress in yellow concentric circles made from painted aluminum foil. 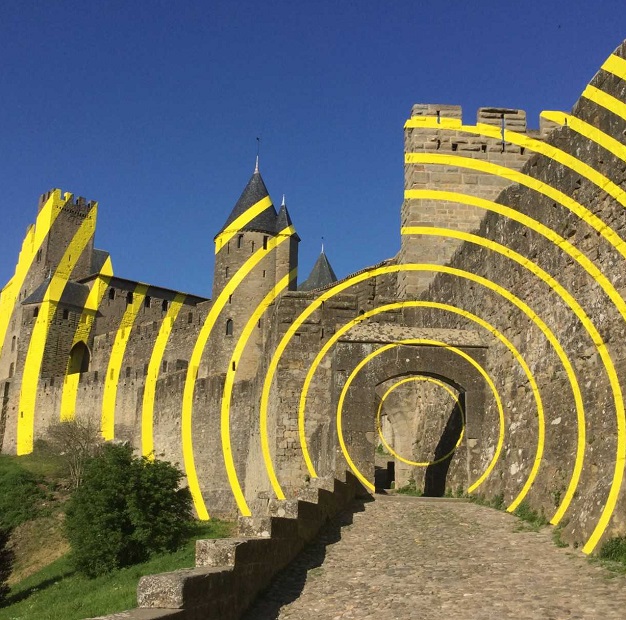 My first thoughts when seeing those circles were: ugh, pass me the eye bleach, hypnotic, mind control, antenna. Officially this "art" installation was to be seen from April to end of September but interestingly they projected the circles during the nights of March 20-22 on the walls, so the technicians could prepare the installation. link. The terrorist attack took place on the 23rd.

The work for undoing the installation started on monday 15th octobre according to this article: link. The floods happened in the night from Sunday October 14 to Monday October 15.

Then there is the color:

The office of the Inquisition was formulated in response to Catharism, and a crusade was ultimately declared against Catharism. To be acquitted of charges of heresy, all a suspected Cathar needed to do was provide proof of marriage (since the Cathars did not believe in the practice). Repentant first offenders (who admitted to having been Cathars), when released on licence by the inquisition were ordered to: ...carry from now on and forever two yellow crosses on all their clothes except their shirts and one arm shall be two palms long while the other transversal arm shall be a palm and a half long and each shall be three digits wide with one to be worn in front on the chest and the other between the shoulders. In addition they were ordered "...not to move about either inside or outside" their houses and were required to "...redo or renew the crosses if they are torn or are destroyed by age."

The name of the woman that lost her husband in the terror attack and her parents in the floods: Martine Mazieres, same initials as Maria Magdalena. Cathars believed in reincarnation. If you google her name the first two hits are for a Toulouse based hypnotist. I am not sure if it is her but Toulouse is pretty close at 90 km (56 miles) to the village where she lives. Synchronicities.
edit on 17-10-2018 by MindBodySpiritComplex because: (no reason given)

I was in Carcassonne this summer and am around that area about 10 times a year.

The entire region is steeped in mystery.

Next year I will be going with the metal detector.