Did He or Didn't He? Should Trump Pay Up?

Trump denies offering $1 million for Warren DNA test, even though he did

Let's go with the facts and only the facts:

"I will give you a million dollars to your favorite charity, paid for by Trump, if you take the test and it shows you’re an Indian."

Warren takes the test and according to sources:

Now people are saying, "PAY UP" because they feel that Trump lost.

CNN reports Trump's words as only, "Who Cares".

In fact, the video shows a little more than that... Trump's Original Statement:

"I will give you a million dollars, to your favorite charity, paid for by Trump, if you take the test and it shows you’re an Indian," Trump said at the time. "I have a feeling she will say 'no.' "


Now Warren is saying Pay Up.


Then a reporter hit him up and:

"Who cares?" he told reporters, when asked if he had heard about Warren releasing the results of her DNA test. Another reporter brought up his promise of a $1 million charity donation. "I didn't say that," Trump said. "Nah, you'd better read it again."

Is Warren in fact a Native American?

I'll get the "Technically" part out of the way since some might use it.... So I call First! Even though it's pretty weak:

Technically, he said INDIAN and not Native American - If you want to go by the 100% facts based on word meanings and not slang. But I don't care about this.

So let's base it upon what Trump meant, or what we took him as meaning:

Is she Native American?

Some tribes require as much as 25% Native heritage but most require at LEAST 1/16th Native heritage. That is one great-great grandparent. Warren is "1/1,024" which is like beginning of time native american.


if you take the test and it shows you’re an Indian.


I don't think you can identify as Native American because you want to. That's still a no no.


What say you guys and gals?

People falling hard for this BS.

We were at a fancy Hotel one summer and while we enjoyed the sun at poolside, I challenged all 3-kids to pee in the pool. I said you'll each receive $10 if you do. Well, they all stood in the shallow end of the pool with that funny look on their faces then came to me all about the same time wanting their money. I said, "prove it".

It's simply amazing so many people are talking about this snip considering what else is going on.

Accusing people of rape without proof.

I think he should pay anyway, just because it would reflect better. And release a message about her being full of sh*t.

She is still a jack ass so that part of her heritage is of much greater concern to me.

originally posted by: mikell
Nope sorry 1/16th is where they start.

Trump in his typical cocky half witted fashion made a big claim, without ever specifying the criteria to what he'd consider as being "Indian".

So by all rights she won... Since she does actually possess Native American genetics.

Anyway, what kind of idiot makes a million dollar bet without laying out specific parameters for what would be considered proof?!?

Gotta say too, theirs nothing lower than a man who doesn't pay up on a lost bet.
edit on 15-10-2018 by Subaeruginosa because: (no reason given)

This was a huge mistake on her behalf she just fueled the fire. It comes back 1/1024 thats .09 percent. Europeans Ameticans statistically have .18 percent thats the genetic term for white people. Meaning trump probably has more indian in him.

The researchers found that European-Americans had genomes that were on average 98.6 percent European, .19 percent African, and .18 Native American. 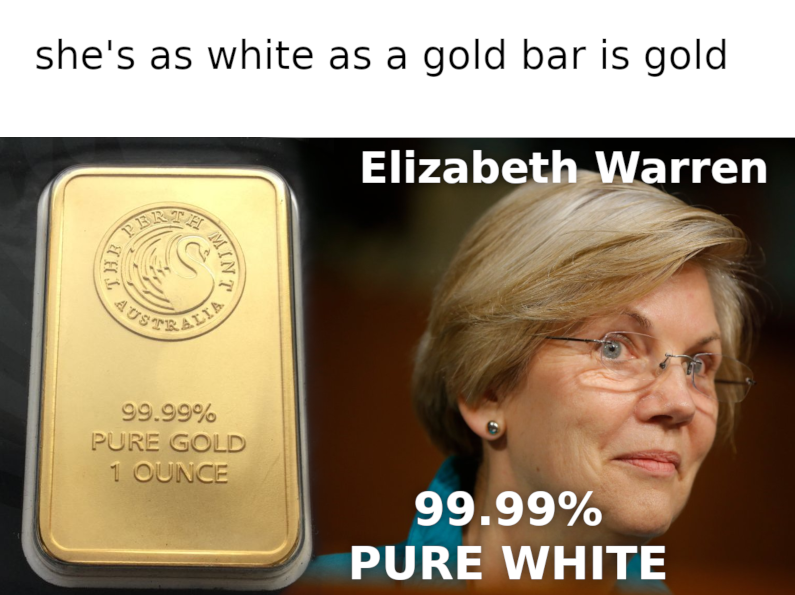 posted on Oct, 15 2018 @ 03:08 PM
link
Technically (pushes glasses up by the bridge and sniffs ) my documentation from the Chippewa tribe says we’re “Indian,” and I think the form’s called a Certificate of Degree of Indian Blood (CDIB)... but whatevs.

Also, if I’m understanding it right, the test she took shows markers of “Indian” lineage, OR a couple of other ancestries, like Peruvian or something, because there’s a lack of comparative or quality dna samples (again, “or something”)... I could be wrong. If I’m not, she didn’t technically show she’s Indian, but rather there’s a possibility that she is... (eta: Technically, Trump wouldn’t have to pay, imo)

I do think it’s questionable that she didn’t announce publicly she was doing it, before she did it. That indicates to ME that she probably didn’t really believe her claim, herself. (Shrug)

No, he shouldn't pay up. No bargain; no handshake; no contract; no deal.

Yes, I'm replying to ask 'who cares' in this thread without actually giving a damn. It IS possible contrary to popular belief!

originally posted by: loam
a reply to: StallionDuck


lmfao, omg that would be epic.