Not long ago, the Cassini spacecraft was de-orbited into Saturn. During it's final few orbits, the instruments onboard were used to sample the environment surrounding the ringed giant. Bits and bytes made their way across space to be analyzed for what information could be gleaned about the Saturn system. And that science is now producing some very interesting and surprising results.

The Cassini space probe’s fatal plummet into Saturn has revealed that the gas giant’s innermost ring sheds icy showers of rain and organic molecules into the planet’s upper atmosphere at an incredible rate.

Not only were the particles of the from the ring studied, but so also were the magnetic fields and radiation belts. They were expecting mostly water ice, and they did find that, but they also found things they weren't expecting:

For years, researchers have known about Saturn’s “ring rain,” or the fact that the ring system around the planet delivers water to the upper atmosphere. But during its final swings around Saturn, Cassini’s gadgets measured the constant shower of nanosized particles. The rain is mostly composed of molecular hydrogen, but also contain lots of icy water as well as carbon compounds, like butane and propane, reports Elizabeth Howell at Seeker.

The sheer volume of material was one of the biggest surprises; Cassini measured 22,000 pounds of material per second fall from the rings. Most of the chemical slurry is being purged from the ring closest to Saturn’s atmosphere, the D-ring. At the current pace, the ring could be fully depleted in about 100,000 years. 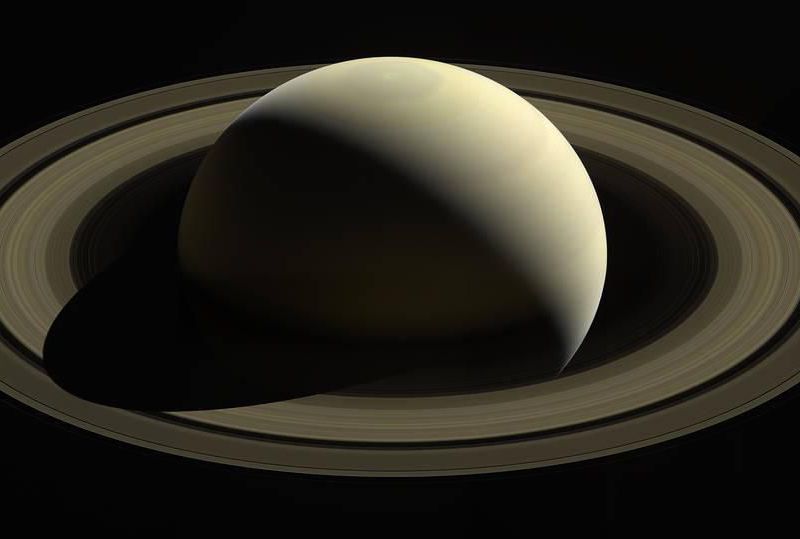 From the paper published recently:

Molecular hydrogen was the most abundant constituent at all altitudes sampled.
...
Water infall from the rings was observed, along with substantial amounts of methane, ammonia, molecular nitrogen, carbon monoxide, carbon dioxide, and impact fragments of organic nanoparticles.
...
Evidence from INMS indicates the presence of molecular volatiles and organic fragments in the infalling material. Methane, carbon monoxide, and nitrogen make up the volatile inflow, whereas ammonia, water, carbon dioxide, and organic compound fragments are attributed to fragmentation inside the instrument’s antechamber of icy, organic-rich grains.

The rate at which the ring particles are raining down into the atmosphere would quickly deplete the inner ring and since that has not occurred, then the inner ring must be being replenished from the next outer ring:

The large mass of infalling material has implications for ring evolution, likely requiring transfer of material from the C ring to the D ring in a repeatable manner. The infalling material can affect the atmospheric chemistry and the carbon content of Saturn’s ionosphere and atmosphere.

This seems to suggest that there is a much closer relationship between Saturn's rings and its atmosphere.

The Cassini INMS measured in situ the atmospheric and ionospheric composition of Saturn’s equatorial atmosphere during a series of flybys between the atmosphere and the D ring in the Grand Finale phase of the mission. Water, methane, ammonia, carbon monoxide and/or molecular nitrogen, and carbon dioxide enter Saturn’s atmosphere from the D ring along the ring plane. This influx is expected to affect the equatorial ionospheric chemistry by converting the H+ and H3+ ions into heavier molecular ions, producing a depletion of ionospheric density previously observed in radio occultation observations (10). However, this may not explain the full extent of small-scale electron depletions observed by other Cassini instruments (33). INMS data include evidence for an influx of organic-rich nanoparticles that further modifies the composition and structure of the equatorial ionosphere and may circulate throughout the low- and mid-latitude thermosphere. Over long time scales, this infalling material may affect the carbon and oxygen content of the observed atmosphere.

Chemical interactions between Saturn’s atmosphere and its rings

What's even more interesting is that the organics raining down into Saturn's atmosphere are not the only such compounds in the Saturn system:

– Complex organic compounds embedded in water nanograins rain down from Saturn’s rings into its upper atmosphere. Scientists saw water and silicates, but they were surprised to see also methane, ammonia, carbon monoxide, nitrogen and carbon dioxide. The composition of the organics is different from that found on moon Enceladus – and also different from that on moon Titan, meaning there are at least three distinct reservoirs of organic molecules in the Saturn system.

And along with this ring rain phenomena, other areas of the system were studied. For example, it was found that: 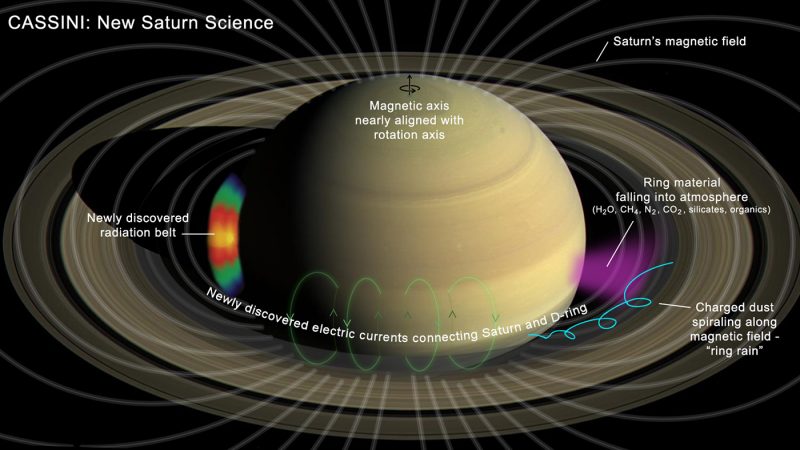 Cassini's Final Year: Science Highlights and Discoveries - Lots of great open access documents on the science from the last orbits of Cassini

Thank you for your time and attention.
edit on 8-10-2018 by jadedANDcynical because: (no reason given)

Thank you for this. S&F.

posted on Oct, 8 2018 @ 05:29 PM
link
Maybe that would also explain the existence of the mysterious ridge along the equator of IAPETUS. Maybe iapetus also had rings in its past, that deposited most matter on the equator, creating a ridge over time.

wiki
Nanoparticles are particles between 1 and 100 nanometres


Bergrun was onto something I suspect

You're not alone in that thinking:

Iapetus has a ridge along the equator that extends continuously for more than 110° in longitude. Parts of the ridge rise as much as 20 km above the surrounding terrains. Most models for the formation of this enigmatic ridge are endogenic, generally requiring the formation of a fast-spinning Iapetus with an oblate shape due to the rotation speed. Many of these require specific scenarios and have constraining parameters in order to generate a ridge comparable to what is seen today. An exogenic formation mechanism has also been proposed, that the ridge represents the remains of an early ring system around Iapetus that collapsed onto the surface.

Modeling an exogenic origin for the equatorial ridge on Iapetus

It would seem as though the instrument is designed only to be able to measure in those tiny increments.

INMS operated in a survey mode, acquiring mass spectral data at every mass within its range [1 to 99 atomic mass units (u) at resolution of 1 u], with a repetition rate of 9.5 s (~300 km along track) or 4.5 s (~150 km) when ionospheric data were or were not being acquired sequentially, respectively.

The instrument can measure down to a single atomic mass unit, that's some pretty impressive resolution.
edit on 8-10-2018 by jadedANDcynical because: additional reply

originally posted by: jadedANDcynical
And along with this ring rain phenomena, other areas of the system were studied. For example, it was found that:

The Cassini spacecraft observed strong electric currents aligned along Saturn's magnetic field as it traversed regions inside Saturn's D ring. Modeling and analysis of these currents show that their origin lies in the neutral winds observed in the upper atmosphere of Saturn. The wind‐generated currents dissipate a modest amount of energy, which is roughly equal to that coming from solar extreme ultraviolet rays. 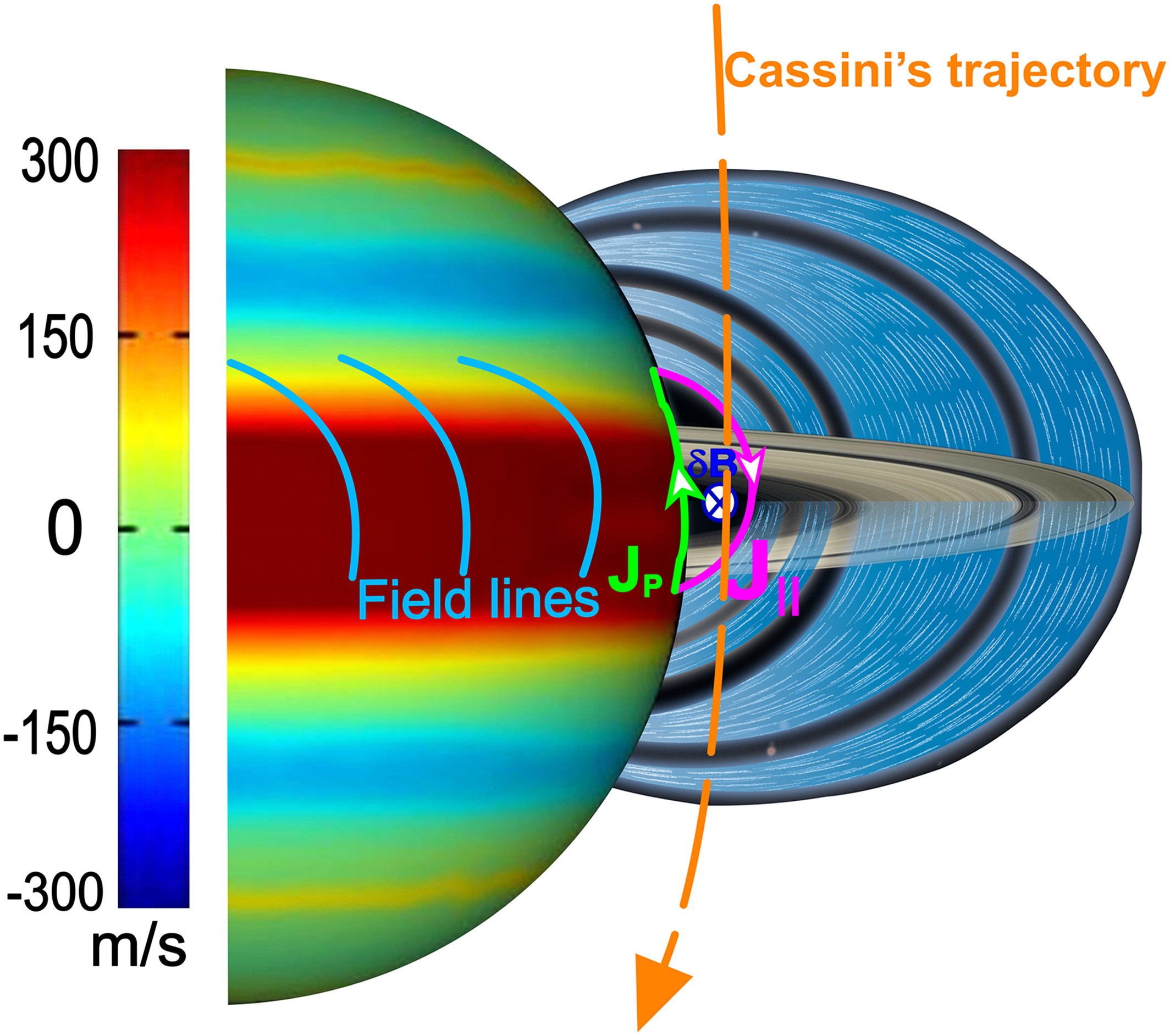