originally posted by: dashen
a reply to: Astronomer62

No - it was the symbol of a Serbian nationalist group with links to the Serbian military. They basically wanted to unite all the South Slavs under the Serbian monarchy.

I'd like your in depth thoughts about Numerology and the Bible.

coincidentally the 31st is the date when the veil between worlds is thinnest , so allowing souls to migrate from the battlefields !

Yes, you are right and i do have caustic humour, however i think in symbolism the Allies had other reasons in choosing 31st October for the Ottoman Empire Armistice, i see this symbolism so often in going through history! 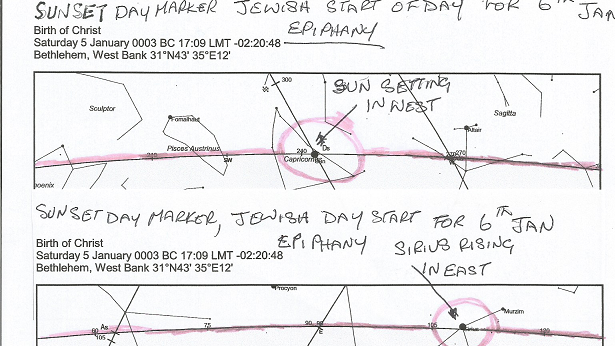 Hi Pixelpusher,
The Numerology of the Bible is too long a subject for my humble thread, i would go far off-topic, however ever thought of Epiphany as Christ's birth?
The Jews start the day as sunset previous to Gregorian Date, so this makes it sunset on 5th January, as the Sun set Sirius was rising in Bethlehem.
The Year doesn't matter as this would happen every year before Axial Precession made the alignment go out of synch, i'll continue this for one more thread section.

posted on Oct, 10 2018 @ 10:22 AM
link
a reply to: thepixelpusher
The early church celebrated the Birth of Christ, his first miracle and Baptism all on the same day, being the 6th January, which is suspect to think these events just happened on same day, however Elgeria Silvia wrote travel notes when she traveled to Bethlehem in 386 AD, astonishingly they survived to this day. She found that Christmas was celebrated on 6th January!
www.agos.com.tr...
seetheworld.travelforkids.com...
If i was one of The Wise Men, i could have followed the Sun Setting as the brightest star in the sky, Sirius, was rising to Bethlehem, but i would have needed date of birth before setting out from Persia to follow this!
When a new religion starts, others jump in and the star alignment could be deliberate Hermetic influence during the early years, Sirius is a very important star to secret esoteric belief systems, so it all is suspect, but tells a very interesting story about the "Three Wise Men".

Hi The Pixel Pusher.
The reason that i doubt 6th January, is that many that follow esoteric secret information in history like to write events in the stars, there by waiting for a day at location where auspicious alignments happen, i have discussed Sirius, the Isis star a little, but isn't the only star secret societies align with, the other star is Alnilam being the middle star of the Belt of Orion which is associated with Osiris.
www.youtube.com...

When Dragutin Dimitrijevic that had a code name of "Apis and the Bee", assassinated Alexander the first or Aleksandar Obrendvic on 11th June 1903 in Belgrade, he wrote of his actions in the sky, please read link a few posts back.

Firstly his code Name Apis is associated with Osiris, please read link below:-
www.ancientegyptonline.co.uk...
I will continue soon.

Many masonic associations use a bee hive as a symbol, i suspect that "The Black Hand" was a fringe masonic society unconnected to regular masons, obviously also the Skull and Cross Bones is another symbol that masons use being on the motif of Black Hand, however i don't think the vast "Normal" masons were involved, however would like masons to engage in debate.
Most knew that messing about in the Balkans could cause another war, I'm fond of Otto Von Bismarck quote's being "If there is another war in Europe, it will come out of some damned silly thing in the Balkans". He died in 1898, but was right in 1914!!!

J.K.Rowling was very clever in choosing Albus Dumbledore for a name in her Harry Potter books, if you like your Latin then Albus means "Bright White", link below:-
www.behindthename.com...
www.thefreedictionary.com...
In code Dumbledore can mean a bee, and a bee can mean a mystical wizard, or Pharaoh god like person, if you scroll down link below to "THRONE NAME", you will see where the fascination with the bee originally came from:-
en.wikipedia.org...
So Albus Dumbledore was a Pharaoh like Chief White Wizard, i wonder if Dragutin Dimitrijevic thought that he was a chief black wizard? 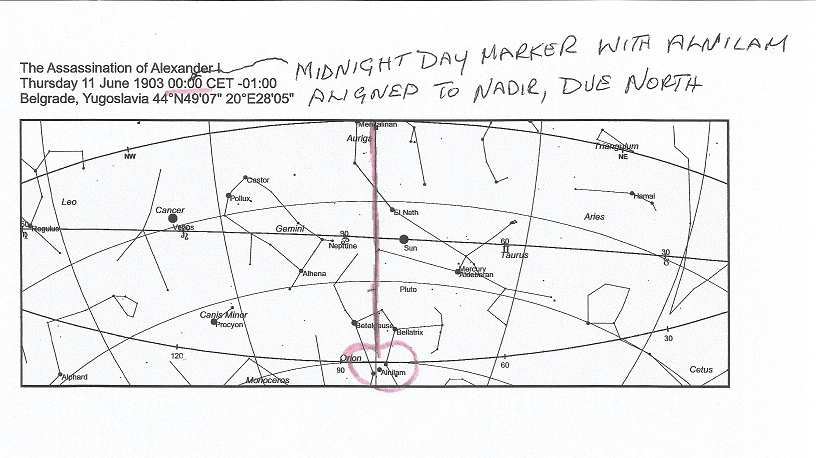 So did Dragutin Dimitrijevic sign his work in the stars and sky when he assassinated Alexander I on 11th June 1903 in Belgrade? Esoteric astrologers mark the start of the day, in this case it was marked at midnight at location. They use the four directions, being Due East, Due West, Due South and Due North.
In this case Due North was used being the Nadir, that can mean death. So he marked his work with the line cutting through the Belt of Orion within one degree margin, which will be recorded in the stars forever!
Apis means Osiris and so does Alnilam center star of the Belt of Orion!

Very interesting thread, I’ve given you a star but no flag as you already had 33 flags when I viewed the thread and the 11th hour of the 11th day of the 11th month adds up to 33. I always thought the 11th hour was chosen deliberately to help cement the time in history for Remembrance Day. But there might have been other reasons too.

I find it funny how 100 years on the anniversary of the end of World War One the year is 2018 which also breaks down to 11 in numerological terms.

I have read the history of the war and it is truly fascinating, both the beginning and the end are full of machinations and conspiracy. 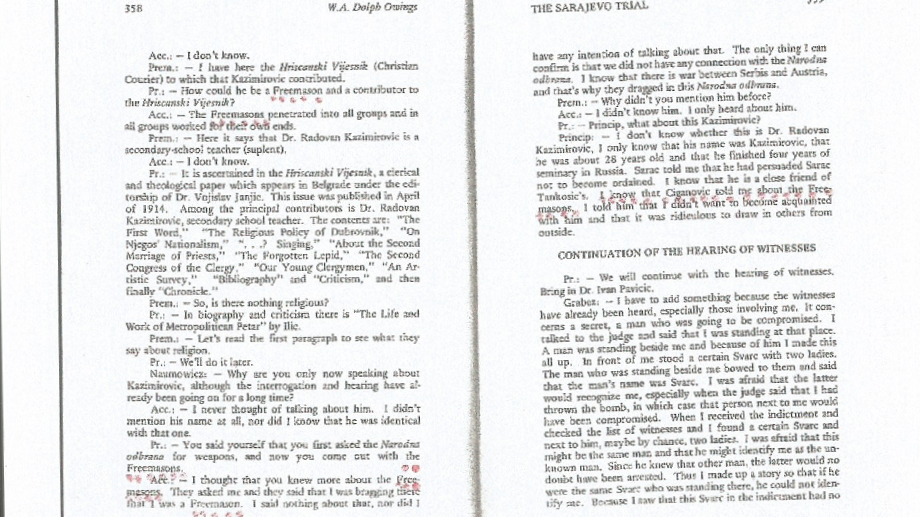 Hi Surfer_Soul,
Thank you for your kind comments, there is a very rare book that is very expensive and out of print, few libraries have it, it is by W.A.Dolph Owings and is called "The Sarajevo Trial", if you look under references on link below, you will see it mentioned:-
en.wikipedia.org...
It is a scholarly transcript of the court notes regarding the conspirators of the Assassination of Arch-duke Ferdinand on 28th June 1914.
To give a clue how rare it is , Australian University Libraries only have five copies.
I am including pages where masons of Europe where implicated in the assassination by the conspirators under oath, they were mostly suffering from TB, which was fatal during that time so had no reason to lie.
I will continue downloading pages from the book, which i have, on following thread sections. 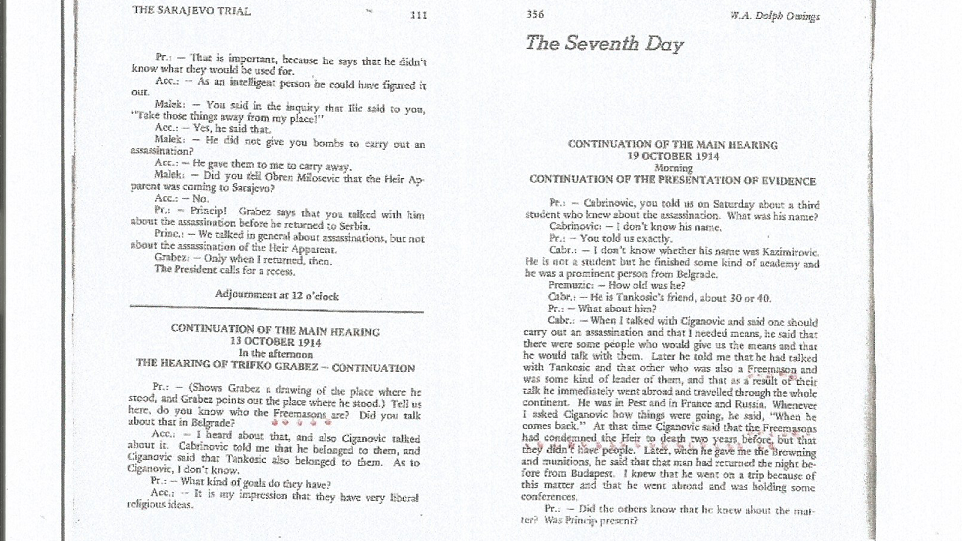 Hi Surfer_Soul,
You will have to enlarge the page to read the downloads i have dotted in red area's to read, i'm including pages from 30,34,52,71,72,81,111,356,358 and 359 where Freemasons are mentioned in a Europe wide conspiracy, whether or not they were fringe Freemason's, i have no idea, but this is good debate material for ATS members, if for no other reason than for the millions of dead soldiers of W.W.1.
edit on 12-10-2018 by Astronomer62 because: spelling mistake 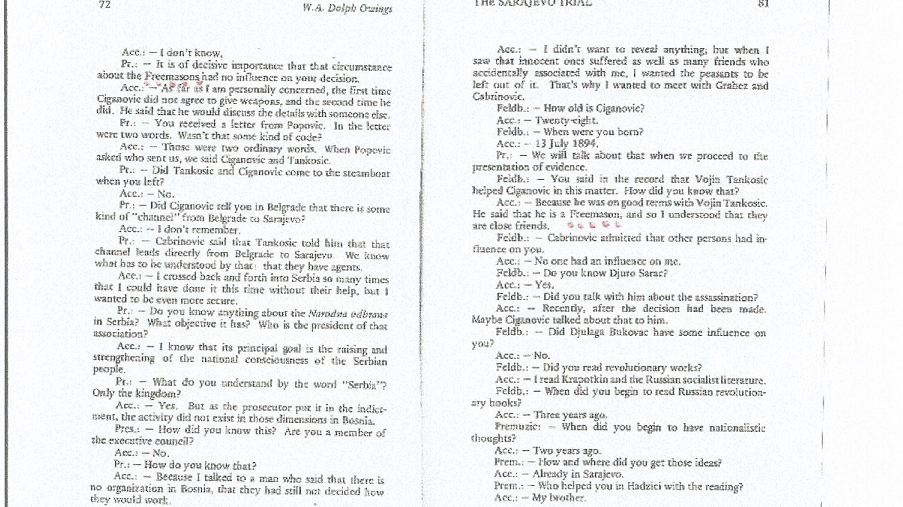 Hi Surfer,
This is third download, where Freemasons are mentioned behind the scenes of the assassination of Arch-duke Ferdinand, this book containing the transcripts of the Trial is rarely debated. 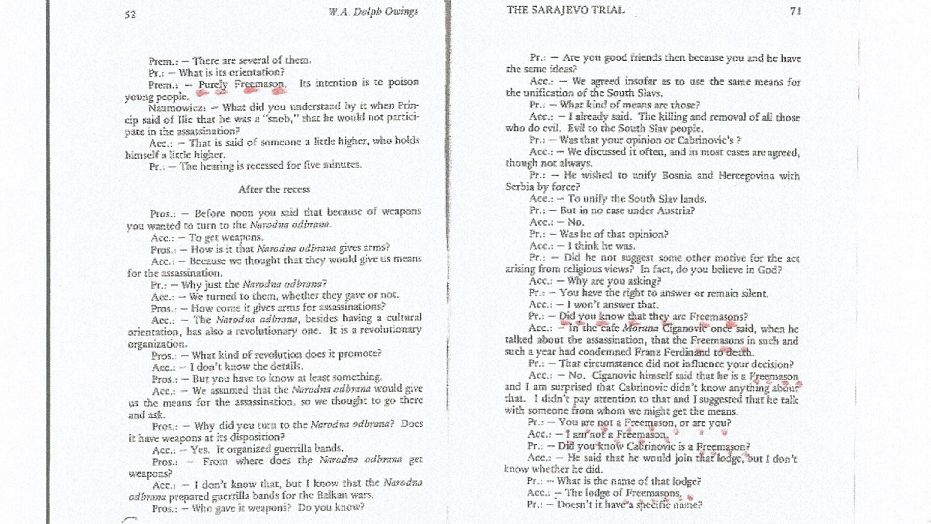 Hi Surfer_Soul,
A interesting link is below:-
serbianna.com...
A fourth download is above, obviously page needs enlarging! 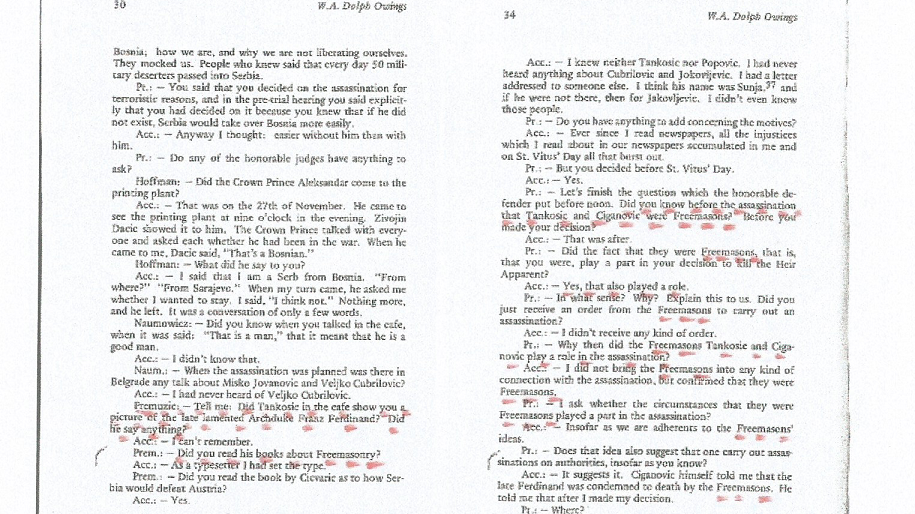 I hope you have a good read with my downloads, the date today is interesting for the trial of the conspirators was held on 12th October 1914 in Sarajevo, anyone want to guess the star alignment? 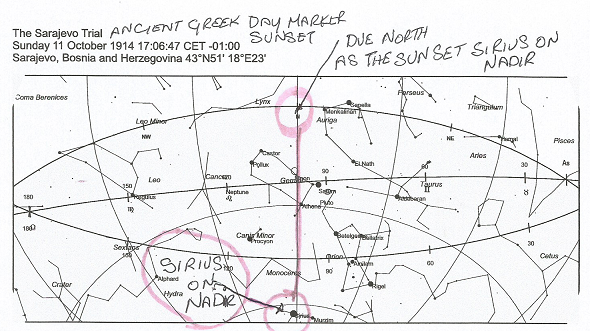 Hi Surfer_Soul, I'm just downloading pictures regarding intended astronomy for the 12th October 1914 and the Sarajevo Trial of the conspirators. Secret Societies mark their work on the four directions being Due East,Due West, Due South or Due North. in this case Due North was chosen to mark with Sirius, the Isis Star.
They also choose one of three day starts, Sunrise, being ancient Egyptian and Roman start of the day, Midnight being modern day start or sunset previous to midnight as ancient Greek day start, which was used in this case so my astronomy charts are aligned to sunset on 11th October 1914 in Sarajevo, to help you understand, i have left a middle ages calendar description that used this method below:-
en.wikipedia.org... 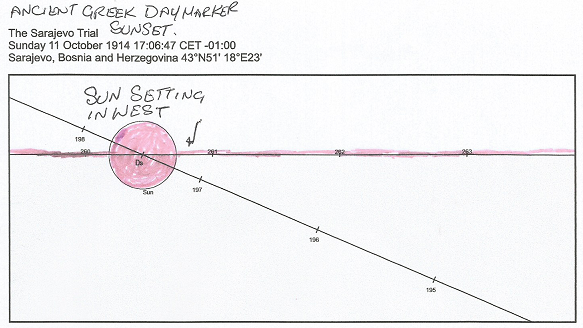 First astronomy graph shows the line of Due North cutting through Sirius, and the astronomy graph above shows the Sun setting, both pictures have the same time.
The media at the time didn't take much notice of this auspicious trial as the First World War had already started!

Thanks for taking the time to reply and upload images from that rare book! I also have a book on the history of Europe that is no longer in print. I might one day create threads on the various events and intrigues it details.

As to the Freemasons involvement he clearly states they had condemned the arch duke to death, but hadn’t ordered the assassination. If those same masons were the black hand or part of it then they are implicated. There was another group of masons whose name escapes me now that were basically an Italian crime mafia. They were disowned by masonry once it was known about their criminal activity.

Personally I think World War One just needed any excuse to kick off at the time it did. The Austrian/Hungary empire was cracking apart, and Wilhelm of Prussia desperately wanted a navy to rival Britain’s. That is why they wanted to invade south Poland which they believed parts of were rightfully theirs anyway. Annexed in previous wars.

Why do think it is important for secret society’s to have events happen under the star alignments you have shown? What benefit could this provide for them?