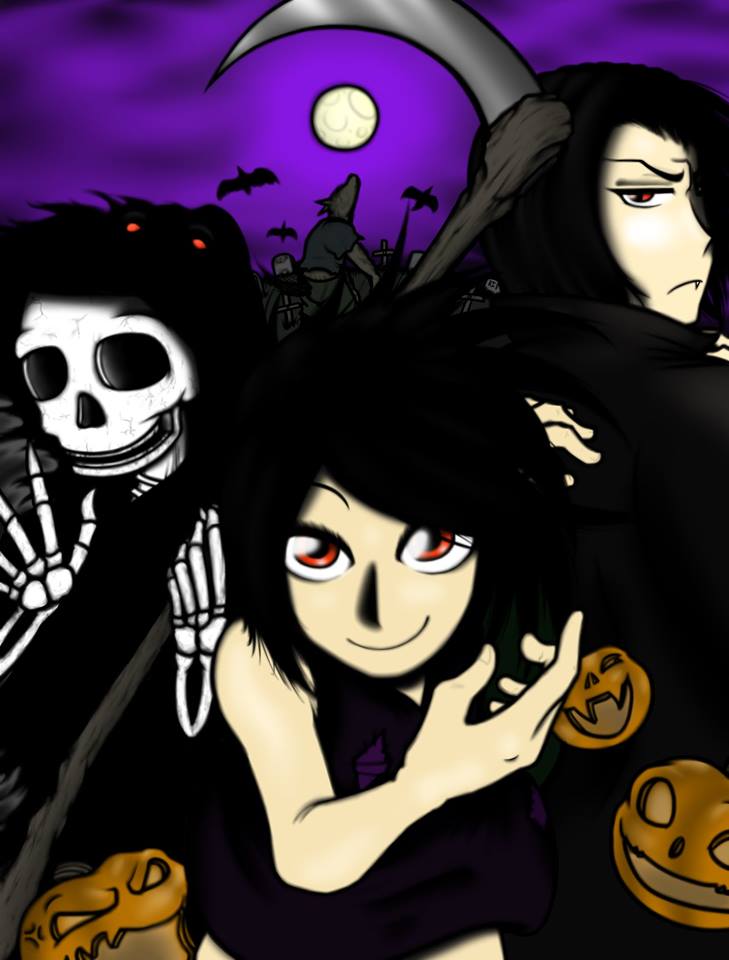 If only the most exciting and frightful dreams could come true.

Alison woke from thrill-induced dreams nearly every night during October, fantasizing about a world beyond her own, a place filled with darkness, magic, and everything Halloween. Each morning, she awoke disappointed to find the world wasn’t a reality. Perhaps it was all the time she spent writing wild horror stories in school rather than doing her school work, or perhaps it was all the time she’d spend in the Halloween aisle at the store during the holiday season. What was it about Halloween that made her mind wander? How wonderful would it be if there was an entire world made of everything from the Halloween aisle—skeletons, werewolves, vampires, red-eyed crows, and more? How marvelous would it be if there was a world made entirely of the misunderstood, of misfits and outcasts? God, she’d kill to be there.

Her suburban family was enormous, with seven children, a workaholic father, and a distant mother who enjoyed mixing drinks at home a bit too often. They weren’t abusive—they weren’t horrible people, really, but they simply didn’t understand her, and they didn’t have time to try. Their jobs kept them occupied and exhausted, and Alison’s siblings demanded much of their attention. So, most of the time, Alison was locked in her bedroom, writing stories on her laptop, sitting at her desk and surrounded by Gothic décor, rock band posters, and Halloween decorations that never seemed to leave the walls. Her room was a dark contrast to the rest of the home, which was spotless, bright, and looked almost untouched by human hands. Truthfully, Alison hated everything about her family, but she didn’t hate them. They weren’t bad, but they were different—different from her, the same as everybody else. And they strived to be. They wanted their lawn mowed to the perfect one-inch length, and they wanted all of their children to dress prim and proper, looking responsible and presentable. Her parents grew distant during her teen years as she adopted a sense of darkness, spikes, black nail polish, sleeve warmers, and anything else punk or Gothic. They almost seemed embarrassed of her, but she didn’t care much anymore.

After all, she was eighteen now. It was about time to start planning for the future—she’d have her own home, far from all the noise and judgmental eyes. Alison always planned to make a living off her fiction stories, but as she stared blankly into the laptop screen, she let out a sigh. Over the past year, reality was catching up with her. Realistically, it would be extremely difficult to make a living off of horror novels and short stories. She’d have to find another job, at least until her stories took off. The thought of burning years of her life away at a nothing job put a disgusted knot in her stomach. No, she wanted to live in her stories—the worlds of survival, serial killers, friendships, betrayals, supernatural creatures, and adventure. Another job would snatch her away from that world for long periods of time, and—as necessary as it was—she hated the idea of it.

It would be just like her routine now, only worse. She marched off to the bus stop every day, never talking to anyone and avoiding the bullies, escaping into her stories and putting forth a fraction of effort into her school work. She came home and talked to no one, and whoever was home would either ignore her or pick on her. Then, after some time on the laptop between typing in chat rooms and writing stories, she fell asleep, and the routine would repeat. The future would be the same, but with one major difference—she wouldn’t be able to slack off at work. There would be no writing, and there would be no daydreaming or story-planning. There would only be work, sinking fries into a deep fryer or mopping up a floor somewhere as a janitor.

Alison glared vacantly at the open word document, her hazel eyes shining with dread. What kind of future was that? Why was it so impossible—so ridiculous—to want a life like the lives of her fictional characters? Reality was nothing compared to fantasy. It was a selfish thing to want—she knew that—but she couldn’t help it. There had to be more to life than school and financial stability… right?

Releasing another sigh, Alison glimpsed around the room, suddenly feeling trapped. She stood and left, marching down the stairs and out the front door, the cool autumn breeze sweeping over her as she strolled across the front yard, the night sky hovering overhead. Her parents hated it when anyone would walk on the lawn, and she had trained herself to stick to the sidewalk—but now, she felt as if she had to break her routine just to feel a glint of freedom, even if it was in a tiny, mundane way.

Alison walked down the side of the empty street, passing by all the large, look-alike houses. Some of them were sporting a bit of Halloween décor, but not many. She swiped her black bangs aside and stuffed her hands into her hoodie pockets, marching out of the neighborhood and heading toward the woods. When she was younger, she often visited the woods with her brothers and sisters, playing daringly near the railroad and sometimes even risking the tunnel. There was a tunnel that resided under the hillside, and the railroad extended through the tunnel. She didn’t know what was on the other side. She and her siblings never traveled the whole thing, fearing that a train might come along during the journey. Perhaps now was the time to explore the tunnel—after all, her childhood was almost over, and she’d have to move away sometime after high school. If she didn’t explore the tunnel now, she probably never would. It was a stupid thing to want, but it gave her a feeling of freedom, and that was all that mattered.

After maneuvering through the trees and crunching layers of autumn leaves, Alison emerged at a clearing. Across the way was the railroad, followed by the mountain and trees as far as the eye could see, a thin fog hovering near the ground, the moon shining ominously from above. She hesitated, a mysterious sensation overcoming her. Her eyes fixated on the tunnel, and as she gazed into it, she felt a faint tug of her heart strings, an urge to approach, almost as if the tunnel was beckoning her, whispering to her, calling her to enter. It’d been years since she visited this tunnel, and she’d never gotten such a strange feeling from it before.

Gulping, Alison strode over the grass and stepped onto the railroad, inhaling heavily and marching into the dark tunnel. The farther she ventured, the darker it became—and soon, she was lost in pitch-black, unable to see an inch ahead of her. As time passed and a slow, looming fear began to grow inside her, she pressed on, determined to find the end of the tunnel.

It was incredibly unsettling to walk in such a thick darkness, trying to march along the railroad’s wooden planks and occasionally missing one, nearly losing her footing a number of times. Her heart thumped anxiously, her ears perked, listening intently for the faint echo of a train. If a train came along, she’d have to dive aside and flatten herself against the concrete wall. Nervous, she bit her lip and continued forward, trying to stifle the anticipation.

Perhaps she could keep walking forever. Maybe, when she reached the end of the tunnel, she could start a whole new life where ever it came out—maybe she could avoid that dull future of hers.

edit on 6-10-2018 by XxKonspiracyxX because: (no reason given)
edit on Sat Oct 6 2018 by DontTreadOnMe because: characters removed from title

Alison stopped dead, her heart leaping into her throat. Pointlessly, she glanced around, though she couldn’t see a thing. Someone spoke—she heard a voice, a faint one, but she definitely hadn’t imagined it.

Alison’s heart began to pound hard behind her ribs. She couldn’t answer—after all, who would’ve been in the middle of this pitch-black tunnel at this time of night if not a homeless person or a serial killer? No—she was being paranoid. Her stories were still fresh on her mind, and the suspense was getting to her. Hopefully.

“I’m… sorry to bother you,” the voice spoke again. “But I… I seem to have lost my limbs. Could you help me find them?”
Alison stood frozen to the spot for several seconds. The voice didn’t sound threatening at all… but lost limbs? She couldn’t have heard that right.

“Wh-who’s there?” Alison stammered, trying not to sound frightened and failing.

“Oh… my name is Steven,” the voice replied kindly. “And you?”

“Well, despite my mother’s wishes, I got the urge to explore today,” Steven’s voice answered from seemingly nowhere. “I’ve always wondered where this tunnel led. But, well… a train came along, and… silly me. I ended up in pieces.”

Alison swallowed. This person was hit by a train? If that was true, shouldn’t he sound gruffer, perhaps raspy or wounded? He didn’t sound like he was in any pain at all. His voice was as calm as ever.

“If I'm not mistaken, I think I'm right at your feet,” the voice said. “My head, I mean. Could you grab me, please? I'll have to put myself back together, and I'll need some help.”

Instantly, Alison was convinced she was dreaming of impossibilities again. Those fanciful dreams inspired her stories—but they could never happen. This stranger wasn’t making a lick of sense. His severed head was in front of her—how? How could that be, and how could he still be alive?

Forcing away a flood of anxiety and confusion, Alison slowly knelt, groping around the darkness until her hands landed on something round, something rough. It was the shape of a head, but there was no warmth from skin or fluff from hair. It felt like a rock, perhaps, or one of the decorative skulls from the Halloween aisle at the store.

“There you are,” Steven said.

The voice was closer now, speaking from her hands. Two dim lights began to shine, glowing red from the vacant sockets of Steven’s skull, illuminating the scene somewhat. Alison’s heart might’ve stopped; she was holding a skull, no skin, no hair, glowing eyes. She jumped and nearly dropped it.

“What’s the matter?” Steven’s skull asked. “Have you never seen a sentient cadaver?”

“Oh…” Steven murmured thoughtfully. “Oh… dear. You’re from the other side, aren’t you?”

“But… no, you can’t be.” Steven’s glowing crimson eyes seemed to focus intently on her. “You have the light. I can see it… in your eyes. Eyes burning red.”

“No… they’re not,” Steven replied. “You’ve crossed the gateway. You’re in my world now… and my world is fueled by the light, the raw power of the supernatural. And, from the looks of your eyes… you have a lot of it.”

Also did you draw that picture, if so that is great!

posted on Oct, 21 2018 @ 07:11 PM
link
Sorry, folks. I got caught up finishing a two-part Halloween segment in my next graphic novel, among a lot of other very stressful things...

I'll try to come back xD

posted on Nov, 3 2018 @ 09:34 PM
link
I'm sorry, life hasn't permitted me time to rewrite my old projects, and Scarlet Realm is one of those. If anyone wants to see where the story goes, I have the old version published here free to read.