posted on Oct, 6 2018 @ 07:42 AM
link
I don’t think it’s Russia, to far from home and they would have problems with the logistics.
It’s probably China they are getting agressive. It would be interesting to see if there Navy can perform in the Western Hemisphere. It’s also interesting to see how the US will react?

Now what type of Military Exercises reQuire 40 plus ships??

One that didn’t require 50 ships?

About 25,000 naval personnel and 52 ships and submarines from 26 countries will participate in this year’s Rim of the Pacific (RIMPAC) exercise, which begins on Wednesday.

posted on Oct, 6 2018 @ 10:24 AM
link
a reply to: ginseng23
It is of no importance what weapons China gifts to Venezuela. As we have seen with the Saudis fighting in Yemen with European and American high end equipment, or The Syrians with their Russian gear, if the soldiers using the equipment do not have the experience and training, they will just fail en masse and lose a lot of expensive equipment.

I believe that the CIA is already paying off some high ranking generals in anticipation of this Haiti style intervention.
OP, I will be updating my thread with this post, thank you for the update. I think it does need further investigation, and when I get back from watching Venom later I will do some more digging and see if I can find images and videos of this armada to confirm these speculations.

How many troop carriers and landing craft involved? That figure will help determine if it is an invasion fleet. Or does that not fit your narrative?

Where do you get your information? The paper? The news on TV? Some artical on the internet? The radio? Some guy?


It really does amaze me how people think they know something or think they have all the facts on a situation just because they heard or red somewhere and "Oh it's a reliable source"... "so it has to be true"

lol yeah and CNN and fox news are reliable sources too right?

posted on Oct, 6 2018 @ 10:56 AM
link
a reply to: DustybudzZ
are you going to bring us into the know?? The OP brought up a topic of interest regarding publicly available tracking software that sees what ships are out on the high seas.

What exactly do you have a conflict of opinion with here??

I reported straight from the mouths of Pompeo, Bolton, and Nikki Haley a couple weeks ago that they already have actions planned and in the works.

There is going to be action regarding the sitting regime of Venezuela.

If you have any actual intel, data, or reports to contribute please fill us in. Otherwise your just wasting your time with grandstanding and mockery that only really makes you look petty and ignorant yourself.

posted on Oct, 6 2018 @ 10:58 AM
link
a reply to: Nickn3
The nearest port for Chinese armed forces is one Ocean and one continent away along the red sea in the nation of Djibouti. I seriously doubt China has anything of that volume built up in the Caribbean.

posted on Oct, 6 2018 @ 11:19 AM
link
I decided to try this software myself. There are a handful of fishing vessels mixed into this group though. I filtered out the fishing vessels to see if these unspecified ship types would have their names listed, but they did not. This was an image I grabbed from just a few minutes ago. 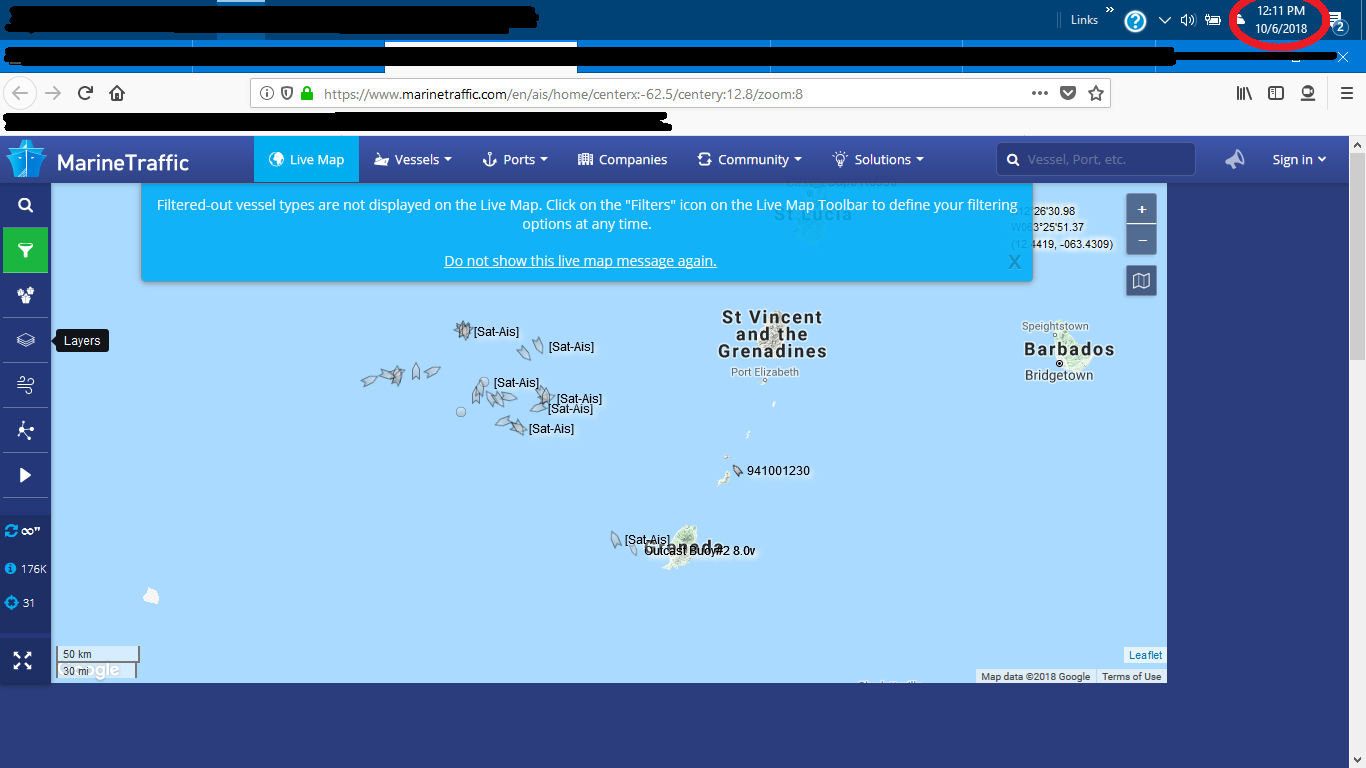 I have concluded that The information from this free tracking software is not sufficient to determine for sure if these are even ANY type of military Naval vessels. There is a paid version that may grant better options, but this free one we just cannot draw any conclusions from. It is still important that we continue to investigate and make an attempt to determine exactly who and what these ships are.


It would be very Russian of them to have fishing trawlers in the group for sigint and the likes.

No your already in the "know". Right? I dont need to bring you in.

Actually the OP was about Venezuela being invaded right ?

One of His source is a internet article
venezuelanalysis.com...

There was no "conflict of opinion". and was not speaking on just the OP. I was stating.. in any situation.
And how it's funny to me what people think they know. I didn't say I know lol

And really? If its classified how would you know ? Lmfao

posted on Oct, 6 2018 @ 12:33 PM
link
a reply to: DustybudzZ
I believe Mike Pompeo was talking last week about Venzuela saying they were working on something.....no details though....

originally posted by: TheJesuit
Maybe not as soon as Oct- Nov but before the next US presidential election to be sure...... Strategy and all

Wow, what an accurate prediction. "Maybe not...but before the next election"

Neat map of commercial ship traffic showing shipping all over the world, many places of which have a larger concentration of ships than Venezuela. And for the record, container ships are not what you would choose to "invade" a country. There are ZERO US Naval vessels anywhere near there and certainly no Carrier Strike Groups nor any Marine Expeditionary Units, which you would absolutely need for an invasion.

THIS IS REAL AND CLASSIFIED!!!!

originally posted by: paraphi
Why would anyone bother invading Venezuela? Venezuela has been so badly governed that the place has been falling apart at the seams for the last decade. Just give another year, or two, and the nut-job regime will be overthrown from within.

regime change in V is when, not if. sooner the better imho.

Right people are so funny

posted on Oct, 6 2018 @ 02:22 PM
link
a reply to: DustybudzZ
Better believe it's still on the way. It just seemed funny that there would be some naval buildup. I have been determined that it would involve a locally sourced operation with a little nudge from some properly located assets.

They probably just fishing out there for no reason as far as those boats go.

and PRESTO there's US NATO invading.

The days of amphibious invasion are largely over. If something was coming it would be by air. There might be an amphibious operation at some point but not until after the air portion was over.

Since this morning, they have landed in the Canal Zone at a former air base in Panama called Howard Air Force Base, 35 F-22 Raptor aircraft, 50 Chinok helicopters, 15 Galaxy 5, and 13 Lockheed L1110, of Intelligence and aerial reconnaissance and 22 Stealth bombers. The question is: Why? The above has not been confirmed but the attached picture of the B-35s In Albrook airport and the destroyer are confirmed. Under the canal agreement, if the US feels that the Panama canal is in danger they can deploy military assets to Panama which it seems they are doing right now. And Venezuela breaking diplomatic relations this week may well be the justification for this. Just got this at 1:50pm EST today from a very trusted source who lives next the old Howard Air Force base near the canal: “# load of helo’s in and out this morning with troops hanging out of them”.

1. There's no such thing as an "L1110" and never has been. There WAS an L1011, but it wasn't used for intelligence missions, and none are still flying in military or civilian use.

4. There aren't, and never have been 22 stealth bombers. The stealth bomber is and always has been the B-2. There were only 21 built, and one crashed.

5. The "Galaxy 5" is supposed to be the C-5 Galaxy I assume. If 15 of those were moving anywhere, it would be noticed, and certainly wouldn't happen at the same time. Very few airports or bases can handle 15 of them. Add in the other aircraft and there's even less room.

Oh, and the "American warship" is Taiwanese.