page: 1
28
log in
join
share:
LedermanStudio
+9 more
posted on Oct, 5 2018 @ 03:19 PM
link
Story posted on Thursday, October 4, 2018
There have been many sites discovered over the last decade, but this might be the first of it's kind. Intact and unopened at the time of discovery.

An intact tomb from the early Mycenaean era (1650-1400 BC) has been unearthed by archaeologists in the region of Nemea, southern Greece. 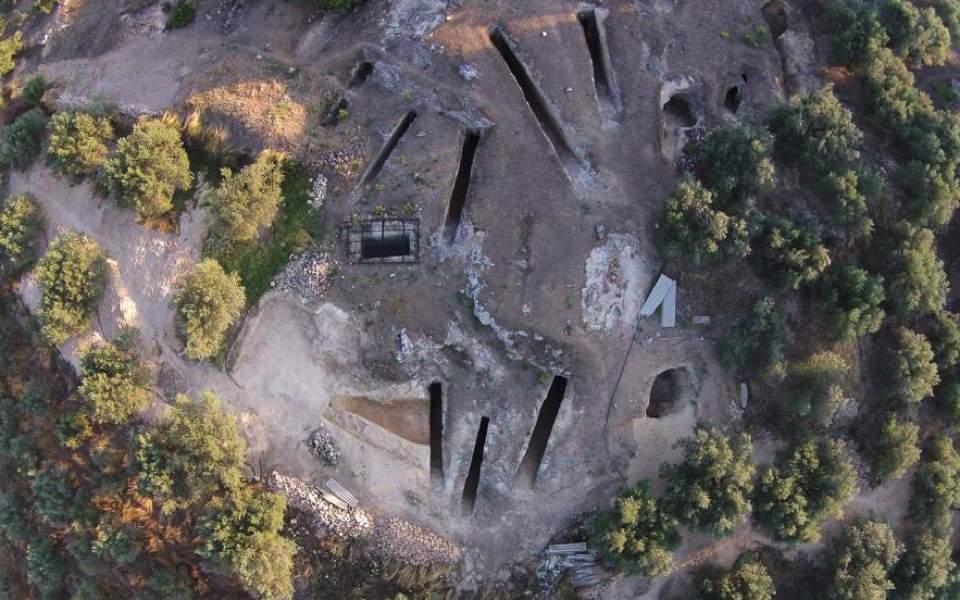 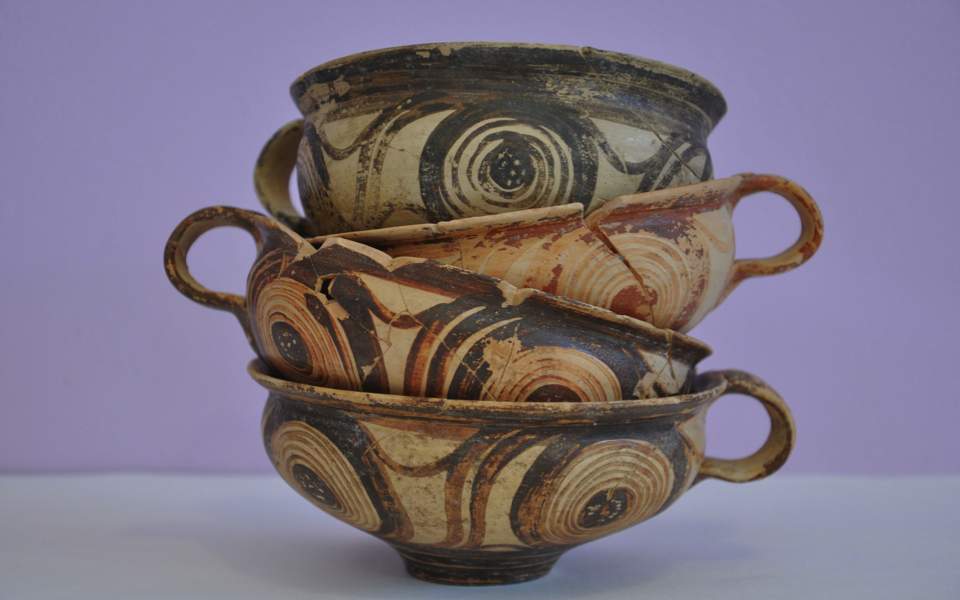 Decorated pottery, copper knives, swords, arrows, obsidian, pins, jewelry, and seal stones were also recovered from the pits. During the late Mycenaean period (1400-1200 B.C.), bodies are thought to have been placed on the floor of the tomb. The eventual collapse of the tomb’s roof in antiquity helped to protect the site.

posted on Oct, 5 2018 @ 03:51 PM
link
Imagine having to dig down into that hard rock every time you needed to bury somebody.


the Illiad and Oddessy were referencing Myceneans, not later Greek civilization.


Yes, so they're also evidence of how much Greek religion derived from Mycenaean civilisation. All the classic legends are set in the time before the collapse.

That's a dang good point. I've never stopped to think about this.

posted on Oct, 6 2018 @ 05:48 AM
link
Wow, that's fascinating.
Imagine being the first person to step into one of these tombs for the first time in centuries? The feeling must be amazing.
After watching Alien vs Predator last night where they discover a massive complex under the ice, my discovery bug has surfaced again. I would love to be a part of a team that finds something like this.

There is so much history buried and waiting for us to discover.

It is a breath of fresh air on these boards after all the political threads that seem to have taken over.


The Mycenaens were a daughter culture to the Minoans, and served as their #1 client state until the collapse of the Minoan system after the Theran eruption.
The tomb of the "Griffin Warrrior" is from the very period when the Mycenaens asserted themselves in power vacuum left behind by the minoan collapse.

Hmm, I know the Minoans heavily influenced the Myceneans as they preceded them by better than 800 years in the region. Its reasonable to refer to them as a daughter culture I suppose, but you would have to say the same regarding the entire region, North Africa, Spain Lebanon, the Phoenecians (whom I believe were Minoans), but that certainly detracts from all the Persian, Egytian etc...Influences.

My point was to express great admiration for the Myceneans


I always thought the Sea people were the Hittites. Documents show that the Hittites completely disappeared from their rocky environment and migrated somewhere else. The downfall of their empire was due to two brothers fighting. Then the Roman empire is founded in Italy by two brothers, one of which kills the other.

From this video, the Sea Peoples were stronger on land than on the sea. That would match with an early Roman empire. Not quite strong enough to take on Egypt directly, but enough to throw a punch or two.

I need to watch the video, however Im confused with your Roman reference? The Bronze age collapse was around 1200bc, Rome was founded in 753 BC by Romulus and Remus (suckled by a wolf no less). The Hittite empire broke up around 1080bc, which is towards the end of the collapse, so that part of your proposal is pretty relevent. They did maintain city states until 800 Bc so are you implying Rome was founded by Hittites?

I watched the video, thanks that was really interesting. Im not sure if Im on board with the Hittites being the sea people, Ive always leaned towards the Philistines of biblical repute, as the Egyptians did mention the settling of sea people in Palestine (taken from the word Philistine btw).

The Sea people did bring about the demise of the Hittites according to your video, but I guess theres a chance it was an uprising from within.

Amazing time in History, the Bronze Age and its transition to the Iron age...anyway you cut it the sea people brokered the massive shift that brought us to where we are today regarding Democracy and Republics...really cool.

And lets not forget the Thracians vastly older, even than the Minoans...these folks had metalurgical skills a thousand years ahead of their contempories. Perhaps they seeded Mycenea and Minoan culture rather than what you surmise?

We just dont know..but evidence supports something different than simply the Minoans seeded the Myceneans.

posted on Oct, 7 2018 @ 02:48 AM
link
a reply to: BlueJacket
BlueJacket,
I have not neglected the "Thracians", they are an integral part of Minoan history, and of the bronze age in general.
I referenced the Griffin Warrior because his DNA profile, combined with the cultural materials at that site, fills gaps in the understanding of what was going on in the Med./Agean at that point in time and how the Mycenaens related to the Minoans and how the Minoans relate to the ancient world as whole.
The warrior's DNA has a number interesting aspects, I'll get to those in second, but first I will digress for a moment.
I have a pet theory about the Minoans, that ties into a broader picture of the world in the 3rd millenia BC.
Essentially the idea is that a group of Akkadian "refugees" emigrated to Crete in the dying days of the Akkadian Empire.
This group of people "kick started" what we know of as the Minoans. They were comprised of members of the Akkadian royal family, military, religious leaders, merchants and foreign traders.
The foreign traders included people from the Indus Valley(west asia).
The Griffon Warrior's DNA shows links to west Asia(Indus Valley) and to Thrace, as well as the Cretans and the Agean as a whole.
While his material culture was Mycenaen, it is clear that it is built upon an Minoan(Agean) base.
Frescos at Akrotiri show ships with Mycenaen warriors sailing in the background, while Minoans go about their peaceful lives, that suggests a subservient role for the Mycenaens.
The Thracians are not "vastley older" than the Minoans, they are contemporaries and infact an integral part of Minoan history.

I was just digging around on other ancient Mediterranian cultures and decided to revisit the Etruscans. Their origins in the area are around 800bc...AND Herodotus stated that the Etruscans came from Anatolia, IE quite possibly Hittites, or at least a remnent. Not exactly Rome, but I guess your theory is as good as anyone elses. Pretty interesting.

Fascinating theory regarding displaced Akkadians and the Minoans. As I stated before, Ive always posited that the Minoans and the world merchant Phoenecians are one and the same or closely related.

My statement regarding Thracians being vastly older is the oldest organized community in Europe being in Bulgaria at around 4700Bc with the oldest worked gold around 4600bc in Bulgaria, not Egypt, not Sumer, nor S America. I see the Minoans getting their start around 3000bc.

I really expect a great deal of information to be added and altered as we continue with Archeology in the Black Sea and dna sampling pre flooding.

ETA I decided to dig around some Akkadian reference materials and in some peoples view, they may well of colonized as far as Crete and alot of dates could correspond. Farming on Crete being dated as far back as 3000bc, but Cretes rise to civilzation is within a 100 years or so from Sargons reign if Im getting what Im reading. Are you thinking after Naram Sins reign? Would you think it was already colonized in your theory and escaped to for its relative isolation regarding royal remnants after Naram Sin?