Is there and up and a down to reality, or a left and a right?

People talk about being centered.

What is the sound of the universe that it can take on a shape? 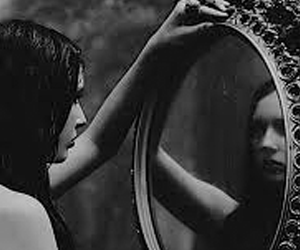 This is bigger than us.

Try As You Might... There Remains Only The Promise... After That You Can Know.

But Til Then.... Fret Nothing!


Any ATS posters who have been deaf since birth could be able to shed some sort of light on that question.

I'd be fascinated to read their views.

EXISTENCE IS THE ONLY REALITY
Existence or consciousness is the only reality.

Consciousness plus waking we call waking.

Consciousness plus sleep we call sleep.

Consciousness plus dream we call dream.

Consciousness is the screen on which all the pictures come and go.

The screen is real, the pictures are mere shadows on it.

The Self (consciousness) and appearances therein as the snake in the rope can be well illustrated like this.

There is a screen (of consciousness, awareness, Beingness, existence).

On that screen first appears the figure of a king. He sits on a throne. Then before him on that same screen a play begins with various figures and objects and the king on the screen watches the play on the same screen.

The seer (subject) and the seen (objects of perception) are mere shadows (projected appearances) on the screen (consciousness) which is the only reality (substratum) supporting all the pictures.

In the world also, the seer and the seen together constitute the mind, and the mind is supported by or based upon the Self (consciousness).

The ajata school of Advaita (non-duality) says "Nothing exists except the one reality (awareness, Beingness, consciousness, existence). There is no birth or death, no projection or drawing in, no sadhaka (practiser), no mimikshu (one who desires to be liberated), no mukta (one who is liberated), no bondage, no liberation. The One unity alone exists forever."

To such as find it difficult to grasp this truth and ask "How can we ignore this solid world we see all around us?" the dream experience is pointed out and they are told: "All that you see depends on the seer (subject). Apart from the seer there is no seen (object to perceive)."

This is called drishti-srishti vada or the argument that one first creates out of his mind and then sees what his mind itself has created.

To such srishti-drishti vada is addressed and they are told "God first created such and such an element and then something else and so forth." (This is the insight that all forms of creation are the result of a finer cause which in turn are the effects of a still finer cause, etc).

That alone will satisfy them. Their mind is not otherwise satisfied and they ask themselves "How can all geography, all maps, all sciences, stars, planets and the rules governing or relating to them, and all knowledge be totally untrue?"

To such it is best to say "Yes, God created all this and so you see it." All these (explanations) are only to suit the capacity of the hearers.

The Absolute (consciousness) can only be One (since nothing else exists).

There is first the white light, so to call it of the Self (consciousness) which transcends both light and darkness. In it no object can be seen.

There is neither seer (subject) nor seen (object to perceive).

Then there is total darkness or avidya (lack of awareness of reality) in which also no objects are seen.

But from the Self (consciousness) proceeds a reflected light, the light of pure manas (mind), and it is this light which gives room for the existence of all the film of the world which is seen neither in total light nor in total darkness, but only in subdued or reflected light.

From the point of view of jnana (knowledge) or the reality, the pain seen in the world is certainly a dream as is the world of which any particular pain like hunger you refer to is infinitesimal part. In the dream also you yourself feel hunger. You see others suffering from hunger. You feed yourself and moved by pity feed the others whom you find suffering from hunger.

You might have eaten to the full and gone to sleep. You dream that you work hard and long in the hot sun all day, and are tired and hungry and want to eat a lot. Then you wake up and find your stomach is full and you have not stirred out of your bed.

But all this is not to say that while you in the dream you can act as if the pain you feel there is not real. The hunger in the dream has to assuaged by the food in that dream.

You can never mix up the two states, the dream and the waking state.

Till you reach the state of jnana (realize consciousness to be the sole reality) and thus wake out of maya (the world illusion) you must do social service by relieving suffering whenever you see it. But even then you must do it without ahamkara - the sense of 'I am the doer' but with the feeling 'I am the Lord's tool.'

Similarly, one must not be conceited 'I am helping a man below me. He needs help. I am in a position to help. I am superior and he is inferior.' But you must help the man as a means of worshipping God (consciousness) in that man.

Giving to others is really giving to oneself (consciousness).

If one knows this truth, would one ever remain without giving?

reminds me of a quote:

"Quantum Mechanics: The dream stuff is made of"

Our eyes are crucial, and we have two of them to observe the world, two eyes to see. One eye would result in reduction or loss of depth perception.

Could it be the world we perceive, in all facets of perception consists of two poles producing the world we observe. Perhaps two positive or two negative poles which through the force between them illustrates the world.
edit on 5-10-2018 by Out6of9Balance because: spelling

Then You start buying "things" and then You have to worry about Your 'things'. You have to maintain them; insure them; lock them up.. The more things You have, the more snip You have to do.

But I'll buy a few tix just cause and if I do win; I will award $250k(USD) to each ATS™ member who has posted before Me on this thread. I'll also do My dangest to blow most of it before I leave just like everyone else... DAB Dead Arse Broke..

posted on Oct, 5 2018 @ 01:32 PM
link
Bipolar....... there is no magic after 66 years of observation and study into Carlos Casteneda, Parahansa Yogananda, the eastern religions, the Urantia Book, Chopra, Manson, Carlin, Leary, McKenna, and all the rest.

Bipolar...? The people I knew who claimed to be affected were burn-outs from drugs or alcohol. There may be legit cases of brain imbalances. You can try to apply it to reality. I don't think you will get a fit.

No! I Strongly Disagree.

Eyes Are Not For Depth And Perception.
You'rr Mistaken The Minds Intrigue With Sight.
edit on 5-10-2018 by Pinocchio because: (no reason given)

It was on task then missed the mark...

Dependent Origination is what needs to be seen it is in there; however after it's appearance the rest fell entirely apart.

The concept of "star" is plucked right from your post.

Any previous mention of star is not the same star... it is a concept or bubble that has arisen based on someone bringing it up... so star is the dependent and you are the origin.

Can you let go of "star" of course... due to impermanence you already did; or else I wouldn't have been able to pick it up and hand it back to you.

posted on Oct, 5 2018 @ 03:44 PM
link
In all likely hood I believe God is Bipolar, hence why it seems that way. God is prolly to ill to worry about its creations, which is why there is a lack of proof besides the obvious. I hope God is alright...

posted on Oct, 5 2018 @ 03:49 PM
link
I'm thinking reality is a spectrum. Some things are more real than others. It's like you're on a little sandy island in the middle of the ocean. It seems pretty solid right in the middle where you're standing, but the farther away you get from the center the less solid it becomes until it devolves into chaos.

posted on Oct, 9 2018 @ 01:50 AM
link
Two things apart from each other are alike, but together they are different. This is one of the many messages delivered in a text called The Song of the Jeweled Mirror written by a zen student/teacher. Here is another portion:

In the most precious mirror form meets reflection:

You are not It, but It is all you.

This resonates to me with Plato's Cave and elsewhere his Claim that things of this world are a reflection from Heaven. In Heaven, perfect principles and abstract concepts are made visible while on Earth they are made invisible to some degree. When we come across these abstract concepts/universal patterns, formless meets form, it is deeply meaningful and causes excitation and dopamine release in our brains, the happy chemical.

What is God then? Omniscient, Omnipotent, Omnipresent.
Consciousness, Field, Space.

You are not god but it makes up all of you. So I try to employ those qualities in my own life.