posted on Oct, 3 2018 @ 11:26 PM
link
In my reading of Eric Voegelin, a conservative, right of the middle philosopher and political scientist, I am annoyed again and again by his eschatological Christianity, his absolutist belief that the "axial age" "mystic-philosophers" of China (Confucius), Iran (Zoroaster), Near East (Hebrew prophets) and Greece (Parmenides, Heraclitus, Plato, Aristotle, etc) were the predictions which were fulfilled in the humanistic perspective of Christianity, embodied in the teachings and person of Jesus Christ.

As a natural philosopher interested in the fabric of matter all the way up to how life has evolved and the many ways it expresses itself, I can't help but notice the ecological 'core' of the human predicament. In the beginning of genesis, a marvellous tale is told about a time of innocent union between the human being and the earth around it - described as a garden, but having the connotation of pleasure. What an act of imagination this genesis 2 myth is! It is far more realistic a description of the human ecological situation 250,000 years ago, lets say, in north Africa, than any religious account known today. The Hebrews thought this up - implying they seemed to have taken an ethological and developmental perspective towards the human predicament, perhaps through interactions with hunter-gatherers in isolated areas. Whether they "theorized", or left the theorizing to their own unconscious, framed in the form of "please YHVH, tell me", somehow, this primitive pre-clothing era of experience was highlighted, and not just that, but the specific language used in the narrative denotes an ecological consciousness that goes along with it.

Christianity is made in the form of Roman civilization. Since Roman civilization is the underlying framework of the western world, todays world, and its most dominant religion, Christianity, is a reflection of how human beings have evolved over the last 2000 years since "Christ".

I respect the meaning that the word "christ" is meant to mean, but i find it naive to think that we can have any absolute relation to the notions we have about the 'fullness' of a certain image when we don't have all the relevant information at hand.

So, what of the humans relation to their environment? Modern hysics, biology, and neuroscience has changed what it means to be human. If any ancient system of belief imitates modern scientific methods of knowing, its buddhism, with its concept of "co-dependent arising". Cells make humans. Over 50 trillion cells are in our body. About an equivalent number of bacteria exist within us and around us. The good ones - the "probacteria", constitute a population of symbiota which produce vital neurochemicals in exchange for desired nutrients from the foods we eat. Certain foods feed good bacteria; others feed bad bacteria. The relationship is not magical - but historical: we have evolved with reference to certain foods, and hence, with certain bacteria properly adapted to convert that food into ideal molecules for human functionality. A mismatch is a situation where we eat foods our bodies are not properly adapted to which allow a foreign populationof bacteria to colonize and displace a healthy and adaptive one. The effect of this abstract language is literally embodied as our 'gut feelings'. The feelings we feel in our stomach our a huge - perhaps the biggest - "afferent feedback", or input, to afffective processes that we have. A gut reaction can take over my cognition by dictating the seriousness of something; it acts in an equivalent way in funny or profound situations. The gut itself has around 150 million neurons embedded throughout it, helping to mediate that fluttery feeling we feel in our gut.

Indeed, from an ecological perspective, the evolution of the nervous systems began with the evolution of the neural net, which exhibited the property of peristalsis, the tell-tale property of the digestive tract. Basically, the hydra is one big stomach peristalsis, with its mouth opening to a tube which rythmically swallows and then extrudes material. 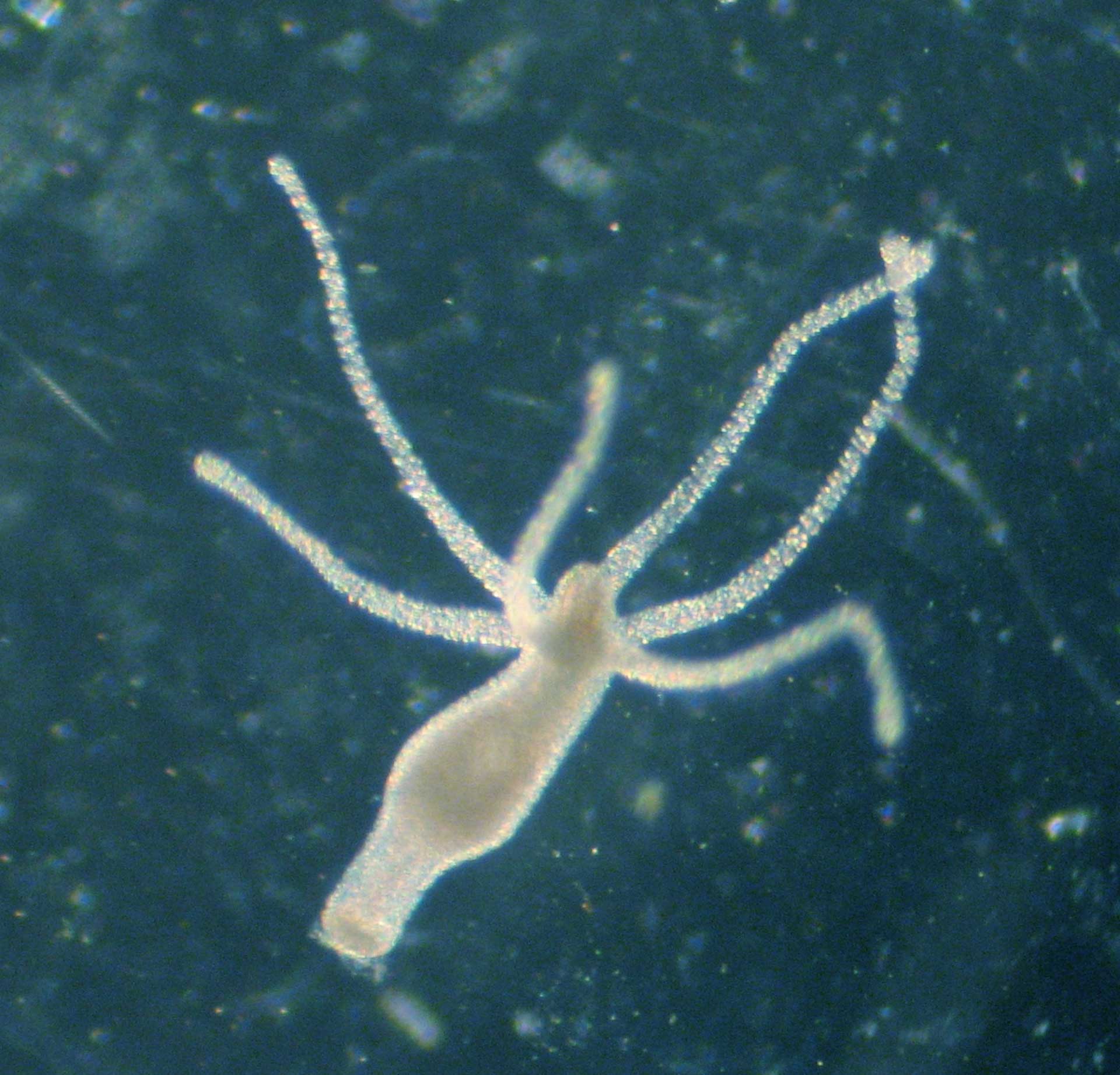 Just tentacles and a tube. The neurons have created a living 'unity' that is more than its parts, and the core dynamic which the tentacles serve is the stomach, which in turn 'serves' the thermodynamic logic which creates the concept of the stomach i.e. a center of energy processing.

Our brain emerges on top of this stomach. Our feelings our most clear and most expansive when our diet matches the wishes of our ancient evolutionary symbiotes: the gut bacteria. This image certainly wasn't available to Voegelin, but it exemplifies how the Roman catholic "Christ" created the human individual with the semiotic means to conduct science; but now that science has emerged, even Christianity and its human-centric soteriological doctrine is giving way to a new thema - a new image that seems to truly transcend the source it came from.

The Human is in a magical relationship with the environment around it, because 300,000 or so years ago, a phase shift occurred in the evolution of biosemiotic life on earth, and the human being, with anatomically modern brain capacities, came into being.

That is so long ago. I try to image, without all the referents we rely upon to make meaning, what could the first human minds have thought? Their referents were of an alltogether different nature. We have evidence of tools, fire, and clothing. Not much. Yet, our deepening understanding of the human brain and its evolution and comparing that with normal human ontogenesis has given us a perspective where we can legitimately probe the earliest time periods in our species history, and wonder, "how did they experience reality"?

I wonder whether the phase shift was itself a function of increased coherency in function. How can a brain evolve except through what we know brains do: think. Thinking is how the brain evolved, and the thinking was the 'semiotic coherency' which brought homo sapiens passed the homo heidelbergensis phenotype into the fully modern, large frontal and parietal lobe phenotype. A real history, underlied by a real abductive discovery of logical processes about self and other selves - what the stoics meant by "logos" - and also the self within its natural environment.

The clincher to my thinking is the facts of modern day traumatology. The discovery of neuroplasticity and the neurotoxic effects of stressful experiences, especially of the traumatic and persistent kind, as well as the results of epigenetic research which shows inheritance goes at least 3 generations, demonstrates that the feedbacks between material culture, social-class dynamics, emotion regulation, and self-narrative, help to maintain the semiotic loops which keep people caught up in certain metaphysical universes. So few people can even conceptualize a period before the present precisely because of the power of the 4 aforementioned determinants. Unless you quiet your mind - i.e. your exposure to activating environments - it is unlikely that a place will be found to relax yourself sufficiently to imagine so distant a period in our species past.

It wasn't known and hasn't been known: its taken the civilizational process itself to 'self-assemble', to bring us together to help build a coherent language of what we are, that isn't babble, that isn't BS, that isn't imprecise in its representations.

Modern science, and in particular, complexity theory, is the theory of our being.

Raja yoga, a complete conjoining of science and religion. Intended to evolve a practitioners vehicle to be able to attain higher and higher states of consciousness.

Have pondered this previously here on ATS:

Add the mitochondria contained within each cell to your bacteria count.