I'm sorry if this has been posted already, on a quick search I couldn't find anything.

So apparently astronomers at the Carnegie Institution of Science spotted a tiny rock in 2015, — eloquently named TG387 and nicknamed “The Goblin”. The team was following the object on its path around the Sun for the last four years, and these observations revealed that it takes 40,000 years to complete one orbit around the Sun due to its very elliptical trajectory.

So this is the interesting part:

This orbit is particularly enticing since it puts TG387 in a select group of distant Solar System objects that all point to the possible existence of Planet X. Right now, there are 14 far-out space rocks that all share similar orbit patterns, suggesting that this planet is out there. Their paths are all super elongated, and they all cluster together in the same area when they approach the Sun. Plus, their orbits are all tilted alike, and they point in the same general direction, as if something big has pushed them into similar places. These objects are the strongest lines of evidence astronomers have for Planet X, and finding a new one that matches this pattern reinforces that idea that this planet is more than just a theory.


Not everything is all doom & gloom. We probably ain't gonna get hit by this planet or these objects attached to it anytime soon.

The closest it ever gets to the Sun is 65 Astronomical Units (AU), or 65 times the distance between the Sun and the Earth. For reference, Pluto only gets as far as 49 AUs from the Sun.

Is it possible that this planet can affect the Solar System in any way when it pass closer to the Sun?

Seems like it's a pretty huge planet to have these objects attached to its gravitational force on this highly elliptical route.

I might be wrong tho, not an astronomer at all.

Guess I saw the thread and thought it was some newly discovered fiction by Tolkien about Goblins & Orcs.

Thats what happens when you just read the headlines!!

Thanks for the valuable information. Mods close this one please.

posted on Oct, 3 2018 @ 02:07 PM
link
such an joke...if they discouver the position of the real planet nasa and all sienctist would be praised into heaven for there discouvery…

Double topic the hell out of it. The more the merrier brotha. I actually love topics like this. You're definitely not hashing my buzz. These are the topics that help me sleep at night. Oh yeah, my titles are usually pretty quirky. I really do hate using the original titles. Though I think I'm supposed to? Dunno. If so... Ooops! Just... Original titles really suck! There's no life to them.

"Did this planet now or in the past ever touch Pluto in an unwelcome fashion?"

Back on topic, it's really great when even in this day and age, where we can get up in the morning and find new stuff just there in our own celestial backyard.

Planet X (as in the letter X, NOT the roman numeral for 10) has been used many times in past astronomy history as a placeholder for a planet that they think might exist due to observed perturbations in the orbits of other planets, but not yet found.

originally posted by: ressiv
such an joke...if they discouver the position of the real planet nasa and all sienctist would be praised into heaven for there discouvery…


First of all, the people who calculated the hypothetical existence of this planet are not from NASA, but Caltech. It's Mike Brown (the guy who discovered Eris, which was being heralded as the potential 10th planet at the time of its discovery in 2005, but which directly led to the demotion of Pluto) and Konstitin Batygin who made the original claim of what they call "Planet Nine".

NASA is not really even taking a huge part in the search for this planet, but rather other astronomers (Mike Brown's Caltech team being among them).

And even if the Sumerians and Aztecs thought another planet existed beyond the known planets (and I'm NOT talking about Nibiru, since the idea of Nibiru sweeping in through the inner solar system every 3600 years does NOT match any real historical writings) it wouldn't matter -- just like Brown's and Batygin's calculations showing a theoretical planet don't matter until that planet is actually found where they say it should be found.


Even if another planet is found somewhere in a completely different orbit than where Brown and Batygin said it might be found, that would not mean that Brown and Batygin were right. Such a planet found somewhere else would likely have no relation to this current hypothesized Planet X, and thus should not be credited to the Caltech team; i.e., it would just be a coincidence that a another planet was found.

Similarly, if a planet is found elsewhere than where ancient people said one might exist, then that planet probably has no relation one the ancients talked about; i.e., it would just be a coincidence.

Heck, if all it takes to claim the ancients were right about another planet, then they should have been said to have been right when Uranus, Ceres, Neptune, Pluto, or Eris were found.

posted on Oct, 4 2018 @ 08:16 AM
link
I just cannot understand how-it-is-that up to 14 long elliptical orbit objects are orbiting a Planet 9, which is also in Its own orbit around our central Sun

I thought that the other distant object dubbed Planet 9 "(or former Planet X) had to be pretty much in a fixed location to be able to draw smaller objects/bodies into an 'orbit' around It....Or Else, the smaller objects/planetoids/asteroids would not have actual repeating orbits --> elongated or circular, but would be just cosmic space debris on a one-way trip to destruction


i'm not too keen on digging up research or papers, so can the OP help me out ?

what do they call a 2 Sun solar system, i forgot at the moment

Is it a binary star system you are asking about?


I just cannot understand how-it-is-that up to 14 long elliptical orbit objects are orbiting a Planet 9, which is also in Its own orbit around our central Sun

I'm not sure what you mean. The 14 other objects are not thought to be orbiting Planet Nine/Planet X, but rather that all have their orbits around the Sun perturbed in such a way (their perihelion's are all on the same side of the sun) that suggests there is another large body out there tugging at them.

Something like this image, which is an older image that shows the original six objects that had perihelion locations suggesting that there was a large body pulling the orbits of the smaller bodies further from the Sun as the hypothetical larger body get close to them. The orbits of these objects are what prompted Mike Brown and Konstitin Batygin to develop their theory about the potential Planet Nine and calculated its hypothetical orbit: 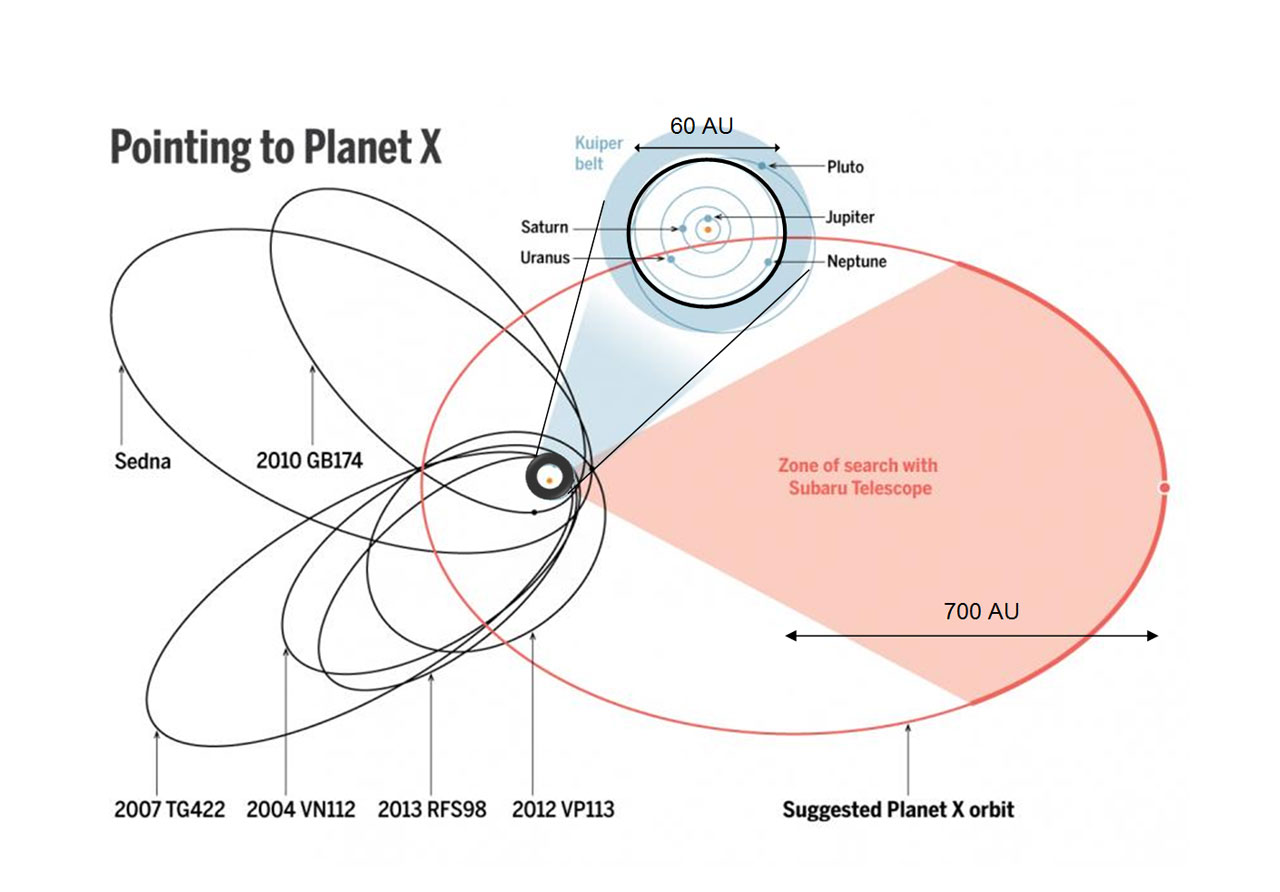 Under this hypothesis, the objects don't orbit Plane Nine, but orbit the Sun.

All that being said, this object could still have smaller objects orbiting it. Pluto-Charon have 4 moons. There have been a number of asteroids discovered that have moons.

originally posted by: drewlander
a reply to: Soylent Green Is People

I believe he's saying that's how the term is currently used in astronomical circles. X is just a variable in this case, it doesn't mean 10.

No, it does not swing by earth every 4000 years like Hale-Bopp (2500-year period) or the mythical "Nibiru" (alleged to have a 3600-year period). Orbital mechanics says no.


Put it this way, the reason they think Planet Nine/Planet X/whatver you call it exists in the first place is because they had noticed perturbarances in the orbits of six kuiper belt objects -- objects whose orbits always keep them well beyond Pluto -- that suggested that some other large object was out there with them pulling on them. That number of perturbed objects is now up to 14, and all have orbits that can be predicted based on the assumption that this Planet Nine exists...

...HOWEVER, there are no such purturbances of teh objects in the inner soloar system, such as you would expect if a large planet swooped through the inner solar system every 4000 or 3600 years.