posted on Oct, 3 2018 @ 07:13 AM
link
The Joint Strike Fighter (JSF) program employed a significant degree of concurrency for multiple reasons. Concurrency refers to overlap in schedule between tasks that are typically performed sequentially, such as development and fielding. This has advantages and disadvantages. One disadvantage is that because many F-35's were delivered before System Development and Demonstration (SDD) was completed, these have limited capabilities, will be mostly limited to training with the newer aircraft being assigned combat roles. In addition, these jets may need modifications for safety, reliability, and/or longevity. This was also the case for the F-22, which is why almost 1/3rd the F-22 fleet is not "combat coded".

I don't have a precise split on how many aircraft were delivered for each Block. But, the most common block is 3i yet some early aircraft are still Block 2B. The final F-35 configuration at the end of SDD is 3F, which is what has been getting delivered for about 1 year. 3i aircraft need a software update to reach 3F. 2B need a hardware upgrade called tech-refresh 2 and a software update to reach 3F. Note: This does not include other concurrency driven modifications, such as the change to the ejection seat and many others which are often required for safety or for full aircraft lifetime. Also to note is that tech-refresh 3 is the hardware upgrade that will enable (in conjunction with new software) Block 4. 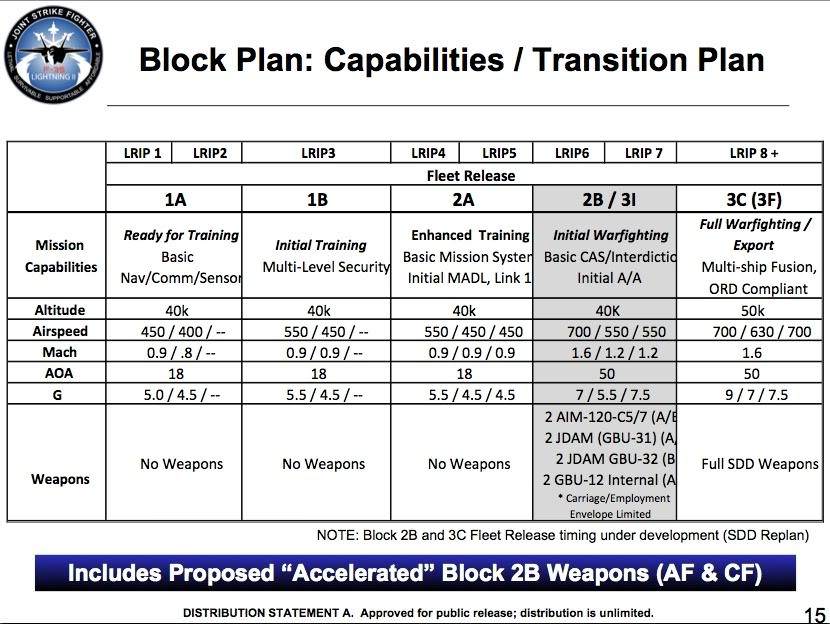 Due to the cost of the upgrades, it was feared that early F-35's would be left in their current block configuration rather than moved to the final block configuration. Note: The total concurrency costs are expected to be $1.41 billion, average $5-10 million per aircraft, but this includes modifications that are not strictly upgrading block such as "F-35B Fuselage Station 496 Bulkhead modification" (required to get full aircraft lifetime).

Anyway, it is now confirmed that all aircraft will be upgraded to final SDD (3F) or better configuration. This is good news as 3F is more reliable and more capable than 2B / 3i, it also means the fleet should hopefully stay more homogeneous without any "mistake jets" being left unused.

Winter also said the services have “fully funded” modifying all their early-production F-35s to the Block 3 standard, but Winter said some may be upgraded to the Tech Refresh-2 and some to the Tech Refresh-3 configuration. The TR-2 includes the Integrated Core Processor, a “panoramic cockpit” display and memory system, and the -3 includes additional improvements. This will make a “considerable difference in reliability and availability” of the aircraft, Winter said.

There's some information on production issues.

The F-35 production line, although meeting annual targets, is late on monthly deliveries, and the Joint Program Office has put Lockheed Martin on notice that it must step up quality or lose some incentive fees. Program Executive Officer Vice Adm. Mat Winter also said the military services have decided to upgrade all their existing jets to the Block 3 standard, but have not yet decided if they will eventually mod all their jets to a Block 4 configuration.

“We are seeing increased touch labor and rework,” Winter told reporters at a twice-annual F-35 status report briefing in Arlington, Va. The line is “not hitting ... monthly deliverables,” he said. The problem stems from “repair, rework, and scrap” of parts on the assembly line that are, for various reasons, not right. Although individually these quality escapes are not adding huge costs, Winter said, each one slows the production line; something he said can’t be tolerated as production is rapidly edging up to the full planned rate of 168 airplanes per year.