Since Watergate, the familiar saying "It's not the crime, it's the cover-up" has been applied to countless situations where efforts to impede an investigation have landed subjects in hot water irrespective of whether or not the original allegations were proven.

NBC is reporting on texts between mutual acquaintances of Brett Kavanaugh and Deborah Ramirez which appear to evidence efforts to influence potential witnesses and strongly suggest that Kavanaugh may have lied to Congress and perjured himself.

Kerry Berchem, a partner with the international mega law firm, Akin Gump, was a Yale classmate of Kavanaugh and Ramirez and a decade later, in 1997, all three attended the wedding of another college friend, Karen Yarasavage. Last week Berchem composed a memo outlining the communications between herself and a number of people from within this circle of friends and sent it the FBI and at least one member of Congress. This memo included the texts between Berchem and Yarasavage. 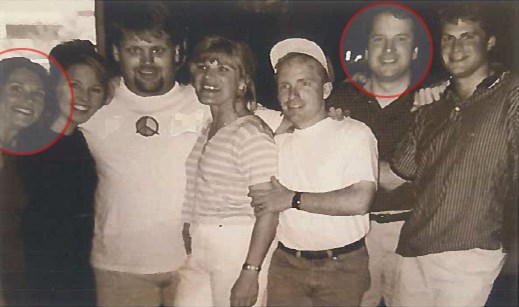 From left, Deborah Ramirez, Kerry E. Berchem, Doug Millet, Karen Yarasavage, Kevin Genda, Brett Kavanaugh and David White pose for a photo at the rehearsal dinner before the wedding of Yarasavage and Genda in 1997

The texts between Berchem and Karen Yarasavage, both friends of Kavanaugh, suggest that the nominee was personally talking with former classmates about Ramirez’s story in advance of the New Yorker article that made her allegation public. In one message, Yarasavage said Kavanaugh asked her to go on the record in his defense. Two other messages show communication between Kavanaugh's team and former classmates in advance of the story

On Sept, 22nd, Yarasavage texted Berchem that she had shared the photo with “Brett’s team.”

But when Kavanaugh was asked about the wedding during a committee interview on Sept. 25th, he said he was “probably” at a wedding with Ramirez. Asked if he interacted with her at the wedding, Kavanaugh replied, “I am sure I saw her because it wasn’t a huge wedding,” but added that he “doesn’t have a specific recollection.” Lying to Congress is a felony whether testimony is taken under oath or not.

So right off the bat, it looks like Kavanaugh may have been deliberately misleading in the Sept 25th interview, acting as though he was unsure if Ramirez had been in attendance at Yarasavage's wedding. It gets worse.

Further, the texts show Kavanaugh may need to be questioned about how far back he anticipated that Ramirez would air allegations against him. Berchem says in her memo that Kavanaugh “and/or” his friends “may have initiated an anticipatory narrative” as early as July to “conceal or discredit” Ramirez.

Kavanaugh told the Senate Judiciary Committee under oath that the first time he heard of Ramirez’s allegation was in the Sept. 23 article in The New Yorker.

It's this simple: If Kavanaugh/his team were talking to these mutual acquaintances about refuting Ramirez's claims before September 23rd, then Kavanaugh definitely lied to Congress and did so under oath. Furthermore, it's not only highly inappropriate for a nominee to contact potential witnesses with the goal of influencing their testimony, but some argue it could constitute witness tampering.
edit on 2018-10-2 by theantediluvian because: (no reason given)


In your opinion, will Flake/Collins/Murkowski see this as disqualifying distinguished Judge Kavanaugh from sitting on the Supreme Court?

Those 3 Senators will make/break Kavanaugh's appointment.

So where are the transcripts of the texts?

I’ll just add this to your statement cause i’m Sure you forgot to.

Now that statement is correct

Fake news, yeah, maybe and maybe that is why OP in his introduction and headline said ''MAYBE''

posted on Oct, 2 2018 @ 12:27 AM
link
a reply to: Vector99
Good question. I will offer a guess though. If this is as substantial as it suggests it is, it will be picked up and turned into headline news throughout the msm by tomorrow afternoon, don't you think?


I was hoping that you would make a thread about this new info coming out!


ironically, it was a Republican, Orin Hatch who decided to take back the time he had originally given to sex crimes prosecutor Rachel Mitchell, so Republicans could throw hissy fits, only to trip the perjury trap!


That’s not a mistaken memory. That’s not a half-truth. That is a clear lie... and it’s also clearly an intentional lie. Those are the two components of a perjury charge.

It sounds to me like another effort to delay the vote by presenting more witnesses, but I guess we will see
edit on 2-10-2018 by Grambler because: (no reason given)

Give it up. The vote happens this week and the weak sauce won't delay any longer.

posted on Oct, 2 2018 @ 12:40 AM
link
Don't care. As long as we get a Judge that believes in the constitution and slaps down the whole creating law done by lower judges then he's golden. Congress in it's legislative capacity makes the laws not the judiciary.

originally posted by: notsure1
So text from 2 people neither of which is Kavanaugh is proof that kavanaugh lied to Congress?

Looks like another attempt to further destroy a man and his entire life for daring to be conservative.

There's a reason NBC used word MAY. They know what they have is bull#, but it MAY cause a delay, so why not air it without confirmation? That's what the leftist media does best.

If they stopped running with every random accusation no matter what people might actually have a measure of care over this, after the train wreck they have orchastrated without a shred of evidence most people are probably going to shrug about this.

I’m not saying this isn’t true

But if nbc or even Blumenthal had actual texts from Kavanuagh before the New Yorker story testing this woman asking her to back him up from Ramirez claim, I believe they would have released that info

If she has those texts, and they say what she claims, why wouldn’t she have given them to nbc? It wouldn’t be against the law and would alleviate her fears of the fbi not seeing them

It could be true, but I will believe it when I see it