the crime has been getting massively worse in the last ten years, not sure if it's happening in other states but here it's gotten A LOT worse since growing up here


But given the situation out in California with the pipe bomb issue. I would think that the statement:


"Loads of us in law enforcement" are confident "this was A. an isolated incident and B. there's no continuing threat," Martin added.

Is a bit premature. (quote came from quoted article)

who know's we know for sure they cover things up

posted on Oct, 1 2018 @ 09:38 AM
link
It is possible that the explosion was caused by a mobile meth lab. Gawd knows that crap is all around western PA.

That’s awful, was the child in the car?

Mr Hallman had a low level drug charge in 2016 I wonder if that had something to do with it, maybe not everybody is on drugs
edit on 1-10-2018 by toysforadults because: (no reason given)

searching through various stories comments section it seems as if that is a very troubled part of town, wonder if they lived there or were there for something else?

posted on Oct, 15 2018 @ 09:13 PM
link
so, wtf is the update to this? How often do car bombs murder Americans in the CONUS?? Why the # is everyone investing in Elizabeth Warren now after the Kavanaugh fiasco, but still completely ignoring the fact that a car bomb murdered three Americans in the CONUS only days after a man was traveling with pipe bombs and arrested in California??

I guess this is the real # that makes people too afraid to dig further, so we just keep yelling at each other over fabricated MSM headlines on political theater?

I guess I will just go yell at someone about Pocahontas, clearly that is much more concerning issue than a car bomb that murdered American citizens in the CONUS.

Herp derp Trump and Q save us durr

posted on Oct, 15 2018 @ 09:34 PM
link
a reply to: toysforadults
you followed this. What have you learned in addition to what was already posted. Did authorities release a motive or connections to any specific factions of any kind, be they political, militant, or civil??

originally posted by: worldstarcountry
a reply to: toysforadults
you followed this. What have you learned in addition to what was already posted. Did authorities release a motive or connections to any specific factions of any kind, be they political, militant, or civil??

I ain't touching any search engine with that criteria with a 10 foot pole, but I'd imagine car bombs probably aren't as infrequent stateside as we think. I'm not saying they're an epidemic or something, but probably nowhere near as rare as believed to be.

That said, considering the neighborhood in question, I'm more than willing to be it's directly linked with a gang, and probably not their first car bomb offing, either. Am I going to have a s#fit over lack of info right now? No. I'm a bigger girl than you are boy, evidently, I can wait for the various organizations to do their investigating. It's not something we need every last detail on right.the.hell.now if they're busy trying to take some group down.


I'm a bigger girl than you are boy, evidently,

You should take these kinds of attacks more seriously you know, there is a world war going on after all. Plenty of car bombs detonate in Hollywood USA. Real world USA is a different story.

Regular street gangs do not do this anymore since the seventies. The ATF and FBI would be so far up their ass business would grind to a halt for quite some time as they take down, person by person, working their way with snitches and threats of never seeing sunlight again as they rat out their next above. The men in charge of such things are smarter than that. It would have been 100 times easier for them to simply walk by, spray them in the car, and walk away without ATF and homeland security snooping on the vague assumption or possibility of terrorism. It was a #ing explosion for chirsts sake.

I mean, parts of Boston suffered marshall law due to a over glorified firework from a rice cooker, but a car bomb just gets treated like "umm, we will tell you more when you are no longer asking about it .... move along nothing to see"

Thugs and crime lords in the streets of the USA do not spend money and sophistication under threat of terrorism charges from homeland security to send a message when a junkie and a handful of bullets or simple shank has been the go to for decades.

This is something bigger, and the fact it is intentionally being ignore may as well confirm it.

posted on Oct, 20 2018 @ 11:15 AM
link
Does anyone know what kind of explosive was used? Not to long ago there was a large theft of "dynamite" (reportedly ~720 lbs) from a pipeline construction site - this was also played off to a large degree. "Some" of the explosives were found discarded in a stream though it was only 360lbs - 1/2 of what was reported stolen. This discrepancy was blamed on the accounting method of the construction company though many think that they don't want people to panic with almost 400lbs of high explosives on the loose.

One of the men in the car caused the explosion. He was into explosives and set them off frequently. He committed suicide. It is terrible that he took his baby boy and another person with him.

With the blame for the violent car explosion that rocked center city placed squarely on driver Jacob G. Schmoyer, the Allentown man’s family reacted Thursday with a mixture of disbelief and anger.

Authorities say Schmoyer laid out his plan to commit suicide and take his 2-year-old son Jonathan and 66-year-old friend David Hallman with him in a series of letters mailed sometime before the Saturday explosion on Turner Street in Center City.

The letters were filled with “hatred” and “vitriol,” said Special Agent Don Robinson of the Bureau of Alcohol, Tobacco, Firearms and Explosives said at a news conference.

posted on Oct, 20 2018 @ 11:28 AM
link
a reply to: BlueAjah
Were these letters like the Manifesto that the gun thief in Wisconsin allegedly sent to President Trump two years ago?? A manifesto which of course was never revealed. The family themselves say this makes no sense, the man was a great father, him and his Uncle were great friends.

Not buying it. What was his professional experience with explosives?? Where did he even get them and what specifically was used? These were not simple pipe bombs. Look at what you are seeing!! 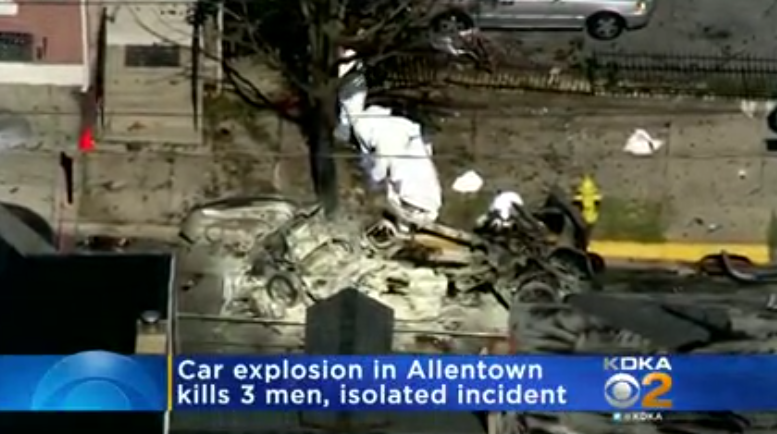 That is not the work of any kind of amateur by a long shot!!

I live in the area, and have heard from people who know people, etc. This guy liked explosives. He was always blowing things up. It was kind of a hobby of his. He used legal components that are available. He talked about it on Facebook too. He also had some mental issues, including depression and hearing voices.

posted on Oct, 23 2018 @ 02:34 PM
link
a reply to: BlueAjah
I keep hearing about these claims, but not much h to corroborate other than hearsay. That vehicle is not the work of a hobbyist amateur. That was a professional grade detonation. If he had any experience it would be documented. If he did it for #s and giggles it would also be documented in police reports on noise complaints or other general concerns from detonating random devices.

Do not accept hearsay as an explanation. Search deeper. Free trial public record's websites could really give us an advantage here in investigative journalism projects.

Maybe I will GIVE it a shot