page: 1
49
<<   2  3 >>
log in
join
share:
shawmanfromny
+17 more
posted on Sep, 30 2018 @ 12:57 AM
link
A security guard, who was working a late night shift at a Chicago nursing home facility earlier this month, is caught on camera reacting to a strange sight. He is sitting behind his security desk, when he witnesses a 'ghost' walk right in front of him. The guy reacts just like any one of us would. He, at first, stares in disbelief, then jumps up and points to the security camera, hoping that it caught the apparition. After his shift, he goes home and tells his family and friends about the incident, but they were skeptical of his story. The next day, he returned to work and checked out the security footage, hoping that it caught the weird anomaly. Sure enough, while filming the footage displayed on the CCTV monitor with his smart phone, he sees a strange white figure moving in front of his security desk. He posted the footage on his Facebook page and it has racked up over a million views.

When I first saw this footage, I thought that it couldn't be a CCTV camera, because it was moving. I then saw a glimpse of a computer screen and realized that the guy was filming the footage with his phone. His reaction is priceless.

Below is a screen shot that shows the footage was filmed off a computer monitor: 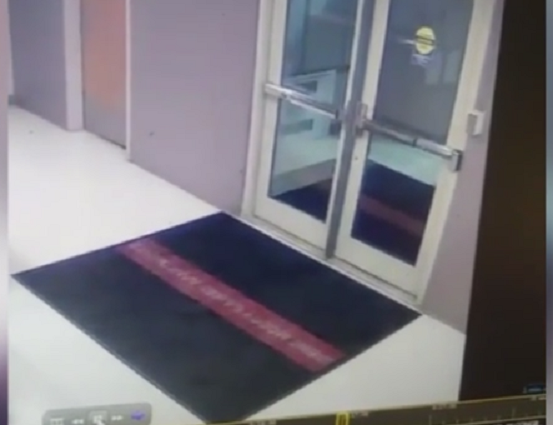 What makes the video particularly compelling is how Brown reacts in the moment that he sees the anomaly. At first, he just stares at the inexplicable sight and then swiftly stands up at the desk while never taking his eyes off the apparition had appeared before him. Brown subsequently stiffens up and takes a step back before regaining his composure and putting his hands up in a manner to suggesting that he wanted nothing more to do with the creepy sight.

Not sure what's going on in the video. There's definitely something moving and it doesn't look like one of the frequent 'bug on lens casing' videos. I have to mention the possibility of hoax because ghost videos are split between hoaxes and mistaken identity (bugs, reflections).

You think the footage is wobbly and moving because he's filming the monitor with his own camera. Can you explain it so I can understand what you mean? Ceiling security cameras don't usually move and have a fixed focus although some can be panned by an operator. When they move, it's a steady, one-speed motion. Whether he's filmed the footage off a monitor, or not, it looks like CCTV camera moved at different speeds and had a wobble.

His body language seems realistic. People have experiences and they don't run around screaming. Often they'll stop and try to figure it out or to rationalise it.

Where I work has cameras in most corners. One evening the cleaning ladies said they were packing up and the fire door on the corridor banged close. I gave them a bit of grief about it lol. The door they said slammed couldn't slam because it was on a strong closer that restricted the speed and prevents slamming. Likewise the door's closer meant it could not remain open without physically being held open. I double-checked it with them like any good sceptic should.

A day or two later we checked the CCTV with curious results. The camera on the corridor showed them packing away and it looked like the fire door was open because there was light on the floor where the doorway was. At the moment they said the door slammed, the footage just stopped. The camera behind the door had also stopped.

The cleaners can be a bit superstitious and maybe jump a little quickly to 'ghosts' to explain noises, feelings and occasionally missing cloths. At the same time, quite a few people have described experiences in the buildings so I remain agnostic.

The wobbling is because the guy is recording with a phone. The actual CCTV footage is stable if you look close enough.

The guys reaction is hilarious. I'm not sure I would have been as cool about it.

Anything can be hoaxed this day, but the guy's reaction sold it for me. I think the CCTV monitor was large and the guy panned his camera to capture both the anomaly and his reaction. If you watch the video clip again, you can see the edges of the CCTV monitor and the wobble is coming from the guy who's not holding his phone steady. I don't think I would either, if I was filming some ghostly apparition that I had seen the night before. It must of been a feeling of vindication for the guy to see the actual evidence and capture it with his phone. Thanks for your comment.

Ha...I would've run out that door for some fresh air, REALLY FAST!


HAHAHA his reaction to that is too funny! But ya that is some creepy shiz.

Reminds me of this

But so much funnier.

posted on Sep, 30 2018 @ 03:33 AM
link
I couldn't see it at first, but after a few watches I caught it. There certainly looks like something is there. You can clearly see it walk under the camera.
The security guard must be sensitive to this sort of thing. Not everyone can feel when a presents is close. Maybe his mind was drifting and he was so relaxed so he could see this. Interesting theory for another day.

His reaction did make me laugh though.

Interesting video that makes me want to research the Paranormal again. Currently researching Ancient Egypt. So much to learn and study.

posted on Sep, 30 2018 @ 05:18 AM
link
At first the "ghost" just looks like a light reflection moving with the camera but after watching it a couple of times I'm sure i can make out a torso and even what looks to be a swinging arm, the more I study it, i can definitely see what looks like a headless body(can't make out a head?) walking with defined natural rotation of the torso and arm swinging/movement, most legit ive seen imo.
How annoying is the YouTube guys voice though?! Very droll and monotone, sounds like he just woke up or something.
edit on 30-9-2018 by Osirisvset because: Clarity

It's a nursing home? Could it be an elderly persn who died there?

originally posted by: Bspiracy
The guys reaction is hilarious.

I think his reaction is acting.

These videos are ten-a-penny, and it's impossible to say whether it's all made up. My personal view is that it's a shadow on glass, or something. The analysis is typical of these things. Trying to make it factual and (to quote the narrator), "... really good proof of the paranormal". You can almost believe what he's saying, eh?

Interesting video, ghosts aren't real though so it must have another explanation. (Hoax).

originally posted by: Osirisvset
At first the "ghost" just looks like a light reflection moving with the camera but after watching it a couple of times I'm sure i can make out a torso and even what looks to be a swinging arm, the more I study it, i can definitely see what looks like a headless body(can't make out a head?) walking with defined natural rotation of the torso and arm swinging/movement, most legit ive seen imo.
How annoying is the YouTube guys voice though?! Very droll and monotone, sounds like he just woke up or something.

Bless your heart, but to me, your response is partly what is wrong with paranormal "investigations."

It seemed like a shadow or something else non-paranormal at first, but then you studied it until you could convince yourself that you could even see a swinging arm!

If it's not readily apparent, and we have to stare at it and try to impose a shape onto it, that seems to me to be pretty weak, evidence-wise.

One thing I wholeheartedly agree with you about: narrator's annoying voice! PUKE. Sounds like he's trying to make himself sound all smooth and radio-announcer-ish. He just sounds gross. Glad I'm not the only one who had that reaction.

originally posted by: ManBehindTheMask
LMAO my black buddy is with me here tonight , hes also my drummer.......we were drinking and drifting through ATS.....


I don't understand what you are trying to convey that your friend said.

So, does he believe the security guy saw something, or was he saying its bullcrap?

originally posted by: Kandinsky
a reply to: shawmanfromny


I agree- anything can be hoaxed these days and people can act; MOST (if not all) of the paranormal videos uploaded are hoaxes.

This guy's hilarious reaction, both on the security camera and on his phone when he's filming the security cam footage, seems pretty genuine to me. That statement is meaningless, I know. I just believe the guys reaction is genuine and he saw something. Not saying he saw a ghost, but I think he really saw something that shook him up.

But like I said, my "gut" reaction to his reaction is meaningless.

Fun to watch though, for sure.


I can't help but wonder if it is the spirit of some old deceased resident that once lived there and doesn't understand that they are dead. That would be really sad if it was the case.