As I initially predicted when the allegations of ford first came out, some spineless never trump establishment republicans would eventually go to the democrats side on this.

And that appears to be exactly what has happened.

On Friday afternoon, in a shock reversal, Senator Jeff Flake (R-AZ), who had stated earlier in the morning that he would vote in favor of Judge Brett Kavanaugh for the Supreme Court, shifted his position and stated that he would not vote for Kavanaugh on the Senate floor without a one-week FBI investigation into sexual abuse charges against him.

Reports are that collins and murkowski will also go along with this.

And now the fun begins.

Democrats will throw anything and everything against the wall.

Independent media people will call kavanaugh a rapist and posts tories of totally anonymous letters with no evidence that prove it.

Democrats will immediately say that republicans have acknowledge the need for an fbi investigation, and so they must agree there cant be a timetable for that investigation. They will say that all allegations,. no matter how ridiculous sounding or anonymous, will need to be fully investigated by the fbi.

They will say the not only should people like mark judge be interviewed, but his friends, and his friends friends as well.

Then when it seems like iot is ending and the fbio produces only statements and no evidence, because there is none, the democrats will still say kavanaugh is guilty.

They will say that the FBI doesnt reach conclusions, and just because there is no evidence dug up by the fbi doesnt mean that ford and the others are wrong.

And at the end of the week, they will say this was no where near enough time for a legitimate investigation. And we will be right back where we are today. Protestors confronting anyone who wants to vote to confirm The democrats saying having the vote is a disgrace against women.

All of their media buddies who have been saying how quick an investigation could happen will now say more time is needed, and the republicans are horrible for wanting a vote.

And the politics of the country comes much closer to totally devolving.

The precedent has been set.

The democrats will do gthis again, it works. The republicans will join in to.

Maybe cory booker runs for president. Mayvbe two weeks before the election they bring up that booker has admitting to sexually assaulting a driunk girl, and so he needs to stop campaigning and call for a full fbi investigation into himself, or he is guilty. Maybe anonymous letters will show up in the mail with not evidence alleging Booker assaulted them as well.

And you no what? The dems wont care at all. They will call out the clearly partisan tricks of the republicans. They will say the alleged victims are being used as a political tool and sthere is no evidncence/.

And the media will go right along with it.

I hope that no one who is cheering for this, either these dems or anyone else, is ever accused of something like this with no evidence. I hope that their families arent destroyed, their names drawn through the mud. IO hope that if that happens and they impassionately defend themselves that that defense isnt used as evidence they would rape people.

And if it did, I would defend these people as well despite our difference in opinions.,

But if it did happen, it would be hard to say these people dont deserve it.


Ok I'm ealier enough on this. How about some lottery numbers too... Oh nevermind this happened:From King5 News


In a tweet, Candace Faber said Republican state Senator Joe Fain sexually assaulted her in 2007. Fain says he "absolutely" denies the claim and called for an investigation.

This is the evil of statism. SPIT

Democrats have already said that they will resist this nomination and every other initiative put forth by Republicans with every ounce of strength in their body.

The Simple Solution is to make them irrelevant.
edit on 9/28/2018 by carewemust because: (no reason given)

I assure you, my friend, that is the exact plan.

posted on Sep, 28 2018 @ 03:12 PM
link
AND it looks like the GOP caved in to pushing this off for another week so that the FBI can poke around. Geeshs, I hope they got non-foundation FBI agents so that the truth with be looked at rather then ignored for politics.


So yep the democrats even won the pushing of the date too.
edit on 28-9-2018 by Guyfriday because: Prediction of the future, because I can

That is the most ridiculous sentiment.

What does booker have to hide then? Why hasnt he or any of the dems called for an fbi invetsigation of him?

Why did they set on this allegation for 6 weeks if they had nothing to hide? Why leak the womans name and letter?

Why havent the accuser filed a police report if they have nothing to hide?

Now the precedent is set, any anonymous allegation into anythi ng is allowed to delay any appontment or anything else politically.

And if the person accused doesnt demand an fbi investigation into themselves, then clearly they are guilty.

I hope you are never accused

So you'd welcome the FBI if they wanted to crawl up your a$$ with whatever probing tool happens to be in popular usage nowadays?

posted on Sep, 28 2018 @ 03:15 PM
link
I say bring it. FBI will not find anything new. Although i'm not a fan of Flake, or this action. I feel like now the Left will have no basis to complain about no investigations when the time comes for him to be confirmed. And he will be confirmed. My opinion of course.

I surely hope you're a saint.

posted on Sep, 28 2018 @ 03:16 PM
link
What in the world are they expecting to find in the next week, that they already havent uncovered? All witnesses that Ford brought forth have claimed that they dont know anything about Kavanaugh or any parties. There is no 35 year old smoking gun sitting around waiting to be discovered. Is the Dems plan to just resist long enough so that Kav cannot be included in the Oct 1 SCOTUS session? Then, just resist a little longer until November and the mythical "Blue Wave?"

Of course they wont.

Did you hear blumenthal yesterday "Do you believe anita hill?"

The fbi cleared clarence gthomas, and many of the dems still say he is guilty

originally posted by: bigfatfurrytexan
I am ashamed to live in this country. I really am.

this is only the beginning.

We have crossed the rubicon.

People who also have nothing to hide, don't sit on a sexual assault allegation for 6 weeks or refuse to report the incident to the Police. 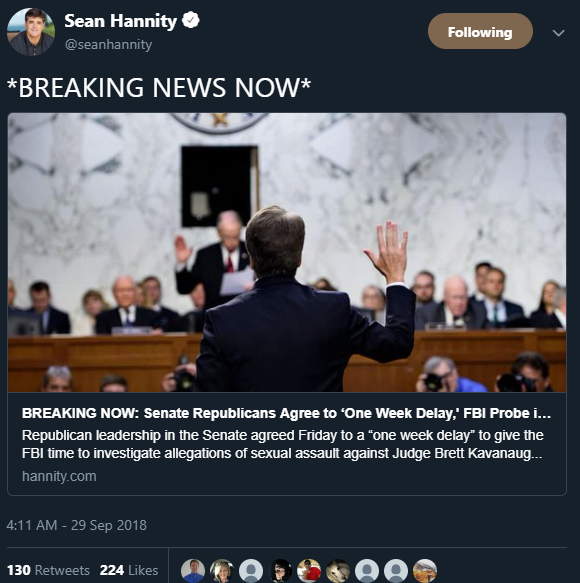 originally posted by: Tekaran
I say bring it. FBI will not find anything new. Although i'm not a fan of Flake, or this action. I feel like now the Left will have no basis to complain about no investigations when the time comes for him to be confirmed. And he will be confirmed. My opinion of course.

You really think that?

You dont think they wont say a week wasnt enough?

You think if no evidence is prodcued by the fbi that they will now say kavanaugh is most likely innocent?