posted on Sep, 28 2018 @ 02:00 PM
link
Kavanaugh was right yesterday when he said his credibility is ruined for good because of this. And yet, the nomination continues...

So? We get a Supreme Court Justice who, himself, says his credibility is ruined. Now, I don't know who is on the right or wrong side of the circus yesterday - but, OP is right. Democrats are delaying and boo to them but the Republicans are forcibly inserting (for life) a Justice who can in no way properly serve the duties of his post.

So you're only disappointed in the Republicans but not the democrats? Yea you seem neutral. The whole thing was a circus and that was caused by the Democrats. But I guess we all see what we want to see.

The Democrats were doing the same things they always do yesterday, so I’m not really surprised by their actions. It was the Republicans who stole the show, and not in a good way.

The party has mutated into some pre-1900’s parody of itself. We probably aren’t far from senators getting into fist fights on the floor with each other. What I saw yesterday isn’t conservatism, it’s the first screams of a new nationalist party.

I need some examples since I saw the destruction of due process and a last minute accusations with no evidence or wittnesses. But I agree the whole process is not broken. Why would anyone wanna go through that circus

HAHAHA - like you have really been holding that in the bag until the Kavanaugh hearings. Whatever.

originally posted by: Shamrock6
a reply to: underwerks

I’d rather not burn the city down just to watch the pretty flames, but I digress.

One side tells me I am supposed to believe her because she's a woman and so am I and men are evil.

But I love my son, and he's not evil and I watched people try to character assassinate a man on a flimsy story because they don't like his judicial philosophy and no other more pressing reason than that.

What am I supposed to do. I can't throw my son under the bus anymore than I can throw myself under one.

At the same time, this is why we're supposed to have due process, and nothing about this entire thing had any whiff of that about it, in fact, it was done in such a way that there is no due process at all, and I'm told to label him guilty based on what?

Show me real evidence, not a story. And don't cry to me about investigations. We know there could have been investigations, could be investigations if the injured parties failed criminal complaints with the police.

I am so done with all this whining.

ETA: We've Been Waiting For You!

That our “leaders” would vote a blubbering, lying mess of a man to a lifetime seat on the highest court in our nation strictly because of politics shows they aren’t leaders at all, just scared old men threatened by a loss of power. And beware the old, tired beast that’s forced into a corner.

How to do Entitled White Male Rage 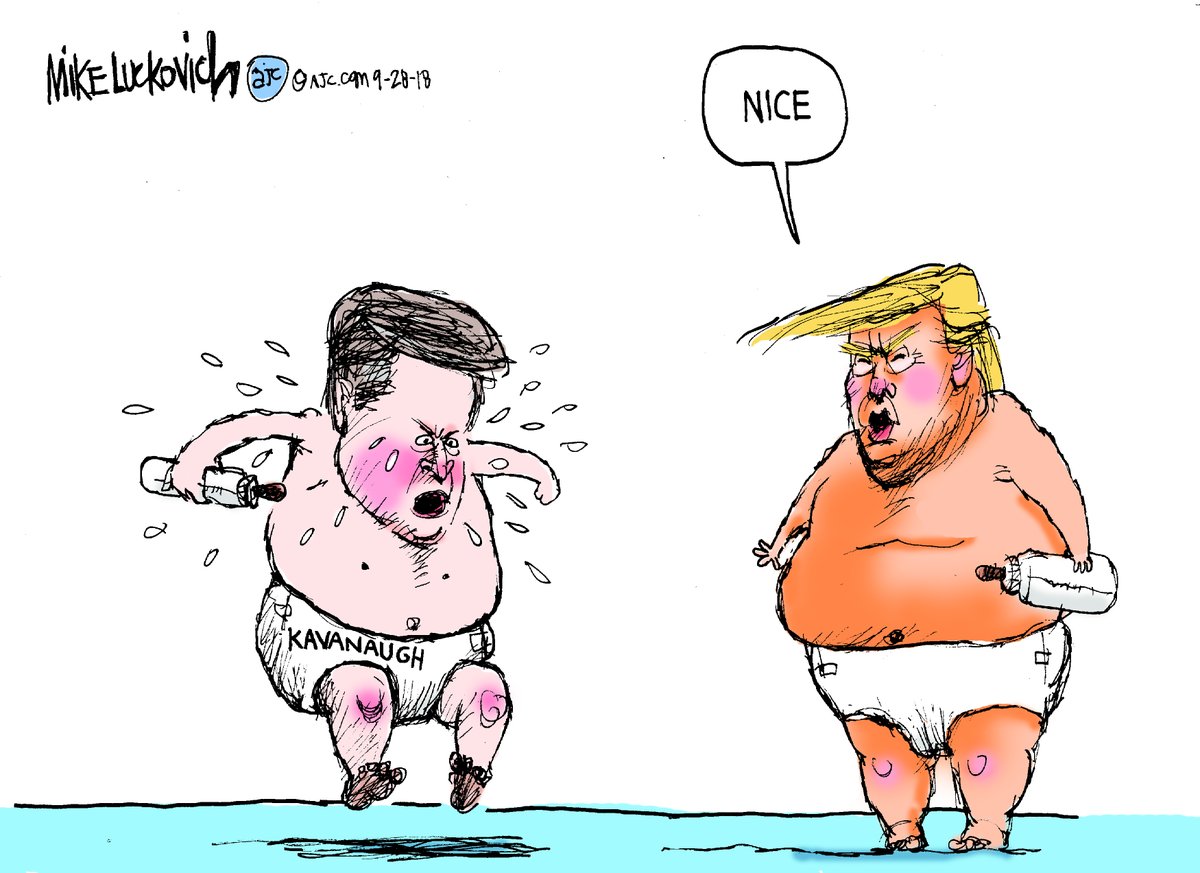 I still think it is dangerous though. We don't need to keep pushing identity politics.

The more it's done, the more it will come into fruition. At the end of the day, we all want the same problems solved (for the most part), we just see different ways of solving them.


Entitlement exists in every demographic.

Bad people exist in every demographic.

I'd argue the densities for most measurable metrics are for the most part comparable between demographics.

My point is, why put identity onto what you perceive in one person? I just think it sets the stage to create the very thing you are fighting for. If people keep pushing the whole "entitled white man" narrative, eventually some of them (I won't be part of it, because I'm not a tribalism), will feel disenfranchised and come together under the banner you're already putting on them.

Please please let this be the straw that finally destroys our two party system so that the moderates can be in charge.

Dude you are not wrong. Maybe misguided, but not wrong.

Policy above personality, the sheeple have been falling for the Machiavellian nonsense for centuries, so one can't fault their beliefs, only their intellect. Trump groupies make me want to facepalm, but I won't stand in their way if they swing to the right.

However for those of the far right that talk about free speech while trying to silence the left, be afraid. It's a known fact that political bias shrinks the sexual organs...okay I made that up but it does shrink one organ...the brain. Okay the latter was a metaphor, we need to realize that bipartisan politics is not the answer but it's the best answer we have.


originally posted by: Fallingdown
It was hit job. I know this is hard to do but be honest. Do you sincerely believe all four of the accusations ?

Whether I believe her or not has nothing to do with anything. I’m talking about the real show yesterday, the attitudes of the politicians in attendance.

If you believe it was a hit job, cool. The same goes for them. That doesn’t excuse the way they acted.


Yep someone attacks and essentially ruins your life without any basis or evidence? Is that where we have come to? This should have never have gotten to where it has. This should have gone to the police in the state it occurred, end of story. There was an agenda and for the most part it already worked.

I'm disgusted with both sides but the constant attacks and the false accusations by the left is what is despicable. I for one was an independent and would vote for whomever I thought was best regardless of party. I am really finding it hard to vote anything but red out of despise.

Sounds like you have a little anarchy in your blood.


Give an example of how he acted entitled


Even Trump never displayed such "entitlement".

I know someone who did...

I still don't understand why people think politicians are sincere and represent the actual underlying ideologies of the two sides. Do they do this intentionally? Maybe that way they can point to these vampire politicians and say 'see that, that is what (insert side here) is all about'.

But these politicians don't represent the people, the citizens, and they haven't for a long time. To actually compare the values of these human imposters to the citizens is a great disservice. Do you do this intentionally so you don't actually have to view the underlying values with an open mind?

You are just playing along with the dog and pony show because it is easier? Does that make you feel better than the possibility that all of this political theater is all fake BS?

So give up your evidence that proves these are false accusations... Pretty simple eh? You have no evidence but you just "know" they are false....