Lockheed is also going through Technology Refresh 3, which involves reducing costs, and improving sustainment capabilities. So far under TR3, Lockheed has chosen Raytheon to build the new DAS sensors, as well as Harris for the new ICP. Under the new contract, Lockheed will see a 75% reduction in cost over current ICP units, along with a 25x improvement in computing power. They are also transitioning suppliers to longer term Performance Based Logistics contracts.

Is there a break down on how many As and Bs are going to whom?

Nothing that I've seen confirmed. They should be announcing the breakdown now that the contract has been signed.

That was just incomprehensible.

It's kind of pretty.. 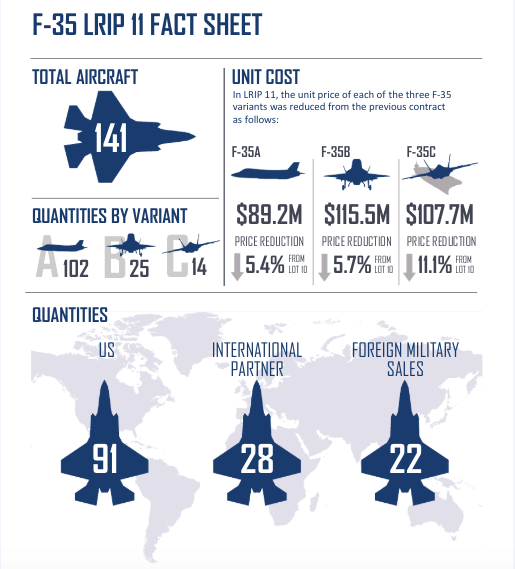 Price is finally coming down on the C model.

They're finally buying more than 4 at a time.

It's too bad it's so heavy and over-engineered for land ops, or maybe they could get the USAF to bite on a limited run of big-wing C once NGJ is ready. Take over the stand-in jamming and SEAD missions while playing "Here, kitty, kitty". Seems like a natural 'ish fit.

Is there a particular reason the NGJ can't be put on another plane?

In other news (feel free to make a thread) F-35 lands on HMS Queen Elizabeth.

Not per se, but there are some things that would lend themselves to easy compatibility, and the USMC is already paying for the integration and steathy externals. Easy to jump in late after the money's been spent. And if you could get a lightened air frame for land ops with the big wing, you've got lower wing -loading than the C which is already lower than the A, more tankage/range/endurance, or higher payload for similar wing-loading. If you got them to offer a non-folding wing, you'd probably get even lighter with more internal volume. But the more mods you make from a standard C, the less commonality and the higher your development costs climb.

posted on Sep, 29 2018 @ 03:03 AM
link
Whilst the F-35C does have greater fuel capacity than the F-35A, it's also draggier and heavier. That means the combat radius is actually the same. That makes it more expensive to operate, whilst being 21% more expensive to buy. Whilst wing loading is better, its transonic acceleration is substantially worse. It's not 9G capable either. It also doesn't have a gun.

Buying the F-35C for NGJ would needlessly fragment the fleet, which negates key JSF concepts such as interoperability, commonality, maintainability and affordability. Countries like Australia aren't going to buy the F-35C just for NGJ.

The solution is simple.

Integrate the NGJ on the F-35A.

EMC would also be a concern due to slightly different hardware and different layout.
edit on 29/9/18 by C0bzz because: (no reason given)

The C has more wetted area, so thats a source of drag, but I have a hard time with the range figures being equal on the same mission profile and reserve requirement. Is the slightly higher drag through wetted area and higher empty weight vs lower wing-loading and four thousand lbs more fuel really coming out to a wash? That might be true, but it'd seem very counter-intuitive, imo. You also get more internal volume for fuel without a fold, and higher MTOWs with the big wing. A lightened, non-carrier stressed C should have a much wider envelope and higher endurance.
You absolutely start losing commonality benefits, and $ adds up, which is probably the real reason you won't see it. Like I said, it's too bad it's over-engineered (heavier, needlessly stronger) for land-ops off-the-shelf or you'd see a more natural fit for a mission profile that could use the endurance and could benefit from the higher instantaneous turn rates.

Marines are already paying the bulk of NGJ integration. It should interface the same way between variants.