I need to verify some of this. But I sure hope it's all true . 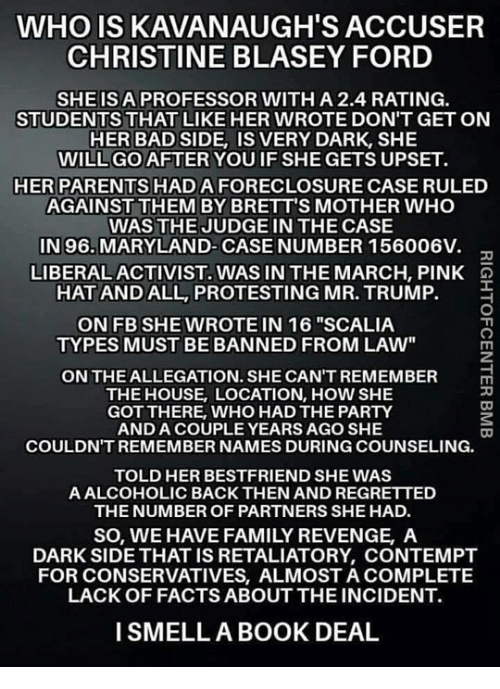 Somebody is going to Feel like they were Kicked in the Stomach ....


We know that's going to be Christine Ford. I bet she downs a quart of Pepto-Bismol, and a box of TUMS before Thursday.


It means Ford wants her testimony to be held in Australia.


Since C. Ford is afraid to fly, How many days by boat is that?

I just thought about making a thread with these videos.

It's beyond amazing how evident their agenda is and that this narrative they're pushing is COMPLETE BS!

And some are still not seeing this is a political move.

Well , I Hope She is Not With Child .

Who said that Ms. Keyser witnessed Brett Kavanaugh assaulting Christine Ford? I must have missed a fraction of this news-cycle last week.

You know, for therapeutic reasons in case she relapses into a mental stupor.

but she knows the floor-plan

posted on Sep, 22 2018 @ 11:27 PM
link
All those who have already made up their minds that Kavanaugh is guilty before having heard any sworn testimony should be recused from the vote.
In this country, all defendants are innocent until PROVEN guilty.

Grassley consented to other Ford demands, including that she be provided security and that Kavanaugh not be in the hearing room when she testifies.

So He doesn't get to confront His accuser?

Of course they think he's guilty.

Because he's not a liberal.

So to them, slandering him, screwing up his kids, ruining his name, his life, his everything is quite OK.

By Any Means Necessary sounds like a cute little slogan, but the Democratic Borg have been ruining people for generations to get what they want.

They don't feel shame about it, won't lose a wink of sleep over what they have put this man through. Hell, they will throw a party afterwards if they succeed in ruining a man much better then they will ever hope to be.

I think because in comparison, they are small dirty hate-bags and they know it, which bothers them.

They also don't think ahead.

Do they think after all the hell they put him through that he won't remember it when one of their pet issues comes in front of him as a Judge later?


Well, they have to get rid of those people too. Shame them, hurt them, make them go away.

Because they are not liberals, so not REAL people.

The mindset is kinda terrifying if you really think about it.

The topic of civil war has been thrown around a lot for the past decade. (And longer)
But never before have I thought it could be so bad as to come to that.
I've never seen the divide so great (and I'm oooold).
Right now I feel the Injustice and lawlessness we are witnessing could pretty easily spiral into that very thing.
It's alarming to see what's happening in this nation

I wonder if these Dimocrats feel shame when they close their eyes to go to sleep at night.

Knowingly lying to themselves and others.

They never close their eyes at night. Just in case Judge Kavanaugh climbs in their windows and assaults them... It's a terrifying prospect.

Well, if the democrats were worried that Justice Kavanaugh might not rule in their favour in future cases, he's sure as hell not going to now.

Talk about putting someone wildly off-side for the next three decades...

The left has really done themselves no favours...

posted on Sep, 23 2018 @ 02:24 AM
link
Then why arent they going after Corey Booker, since he admitted in his writings he sexually assaulted a woman?

Yet there he was lecturing Kavenaugh, the utter hypocrisy is getting to a point where its almost a parody of itself.

Where are the calls to remove Booker? Why isnt he being called to task? Why arent the morally superior left going after him and digging into the past to find out who this woman was he sexually assaulted?


Im sure the answer is clear.