posted on Sep, 22 2018 @ 06:22 PM
link
So out on one of my bike rides a few days ago and ran into something a bit different. I haven't been by the Facebook Campus in a few months and running the perimeter along the Bay Trail there was something a bit odd about the light stands. They have the typical parking lot lights but they were festooned with tons of relay stations, and other communications devices. Now its not that odd to have them here and there but I'm talking almost every pole with anywhere from 3-4 to as many as 12. Some as small as say 6x6 inches, do oval, to cylinders to outright small satellite (Direct TV sized)

EDIT TO Add: The top dome is the parking lot lights and have been there since the Campus was Sun Microsystems its all the small relays and other odd bits that they have added conduit to power

Its hard to get close up because Facebook unlike most of the companies are outright dicks about the security (to be fair the new Apple Spaceship campus is the same way ) and as soon as you venture on campus even on say a Sunday the rent a cops are all over you and will even follow you for a bit once you leave if they don't get the opportunity to stop you.

Im not suggesting anything sinister here but am more puzzled by the sheer volume of the them and the fact that they are ON ALMOST EVERY light pole in varied numbers . It way more than you would need for WiFi and why would you want it out in the parking lot anyway. Any thoughts? The pics are a representative sample..... 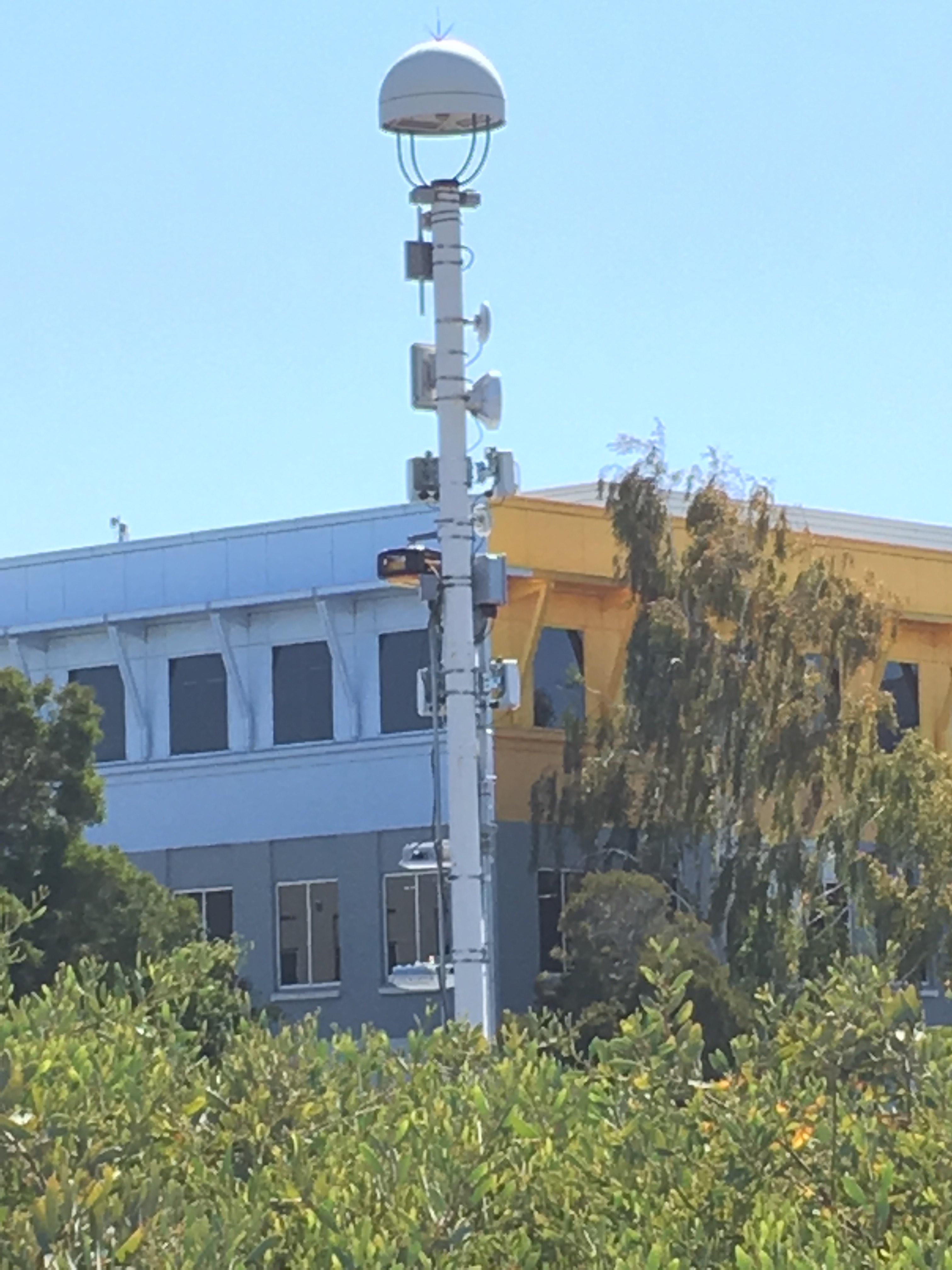 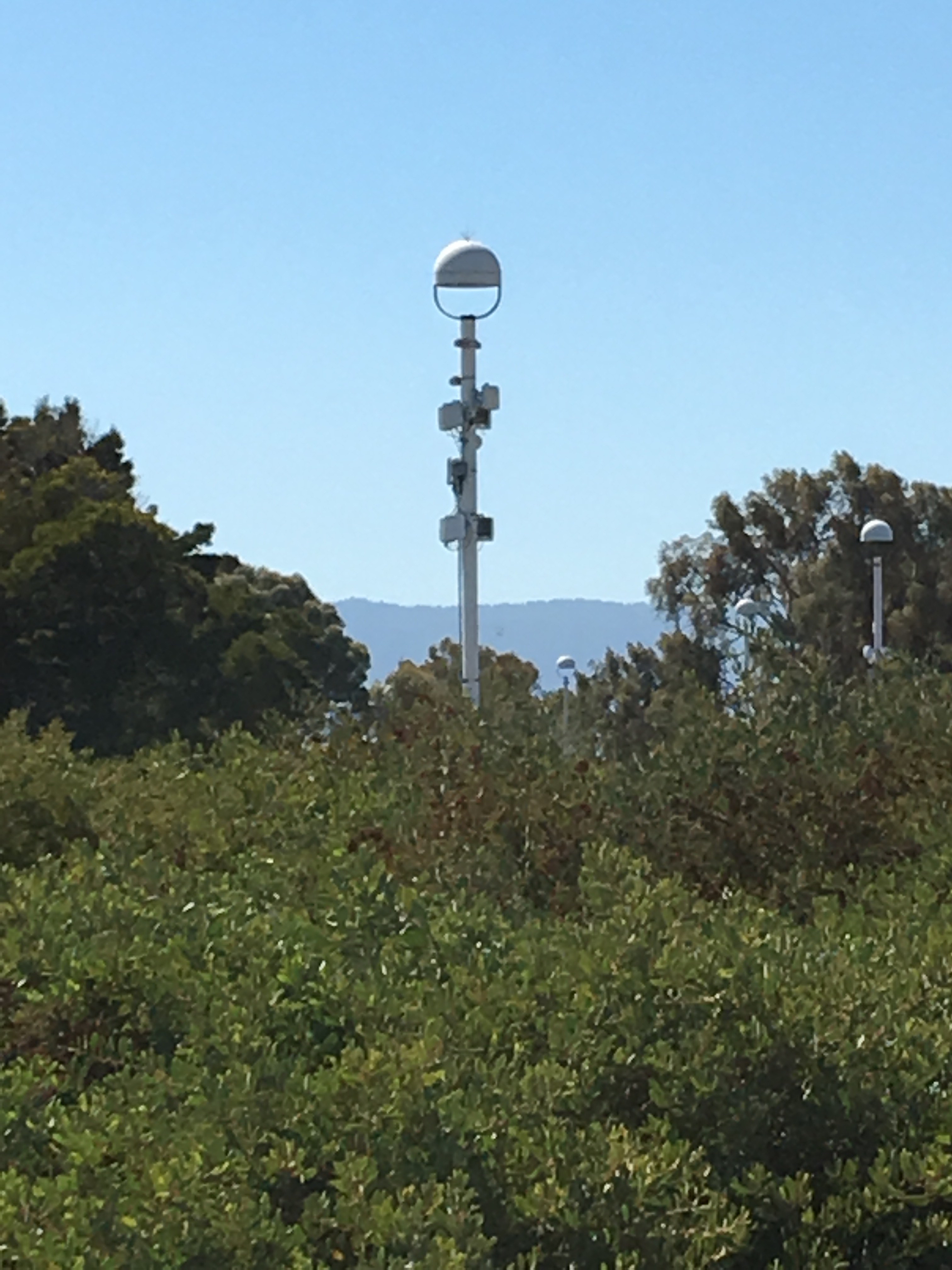 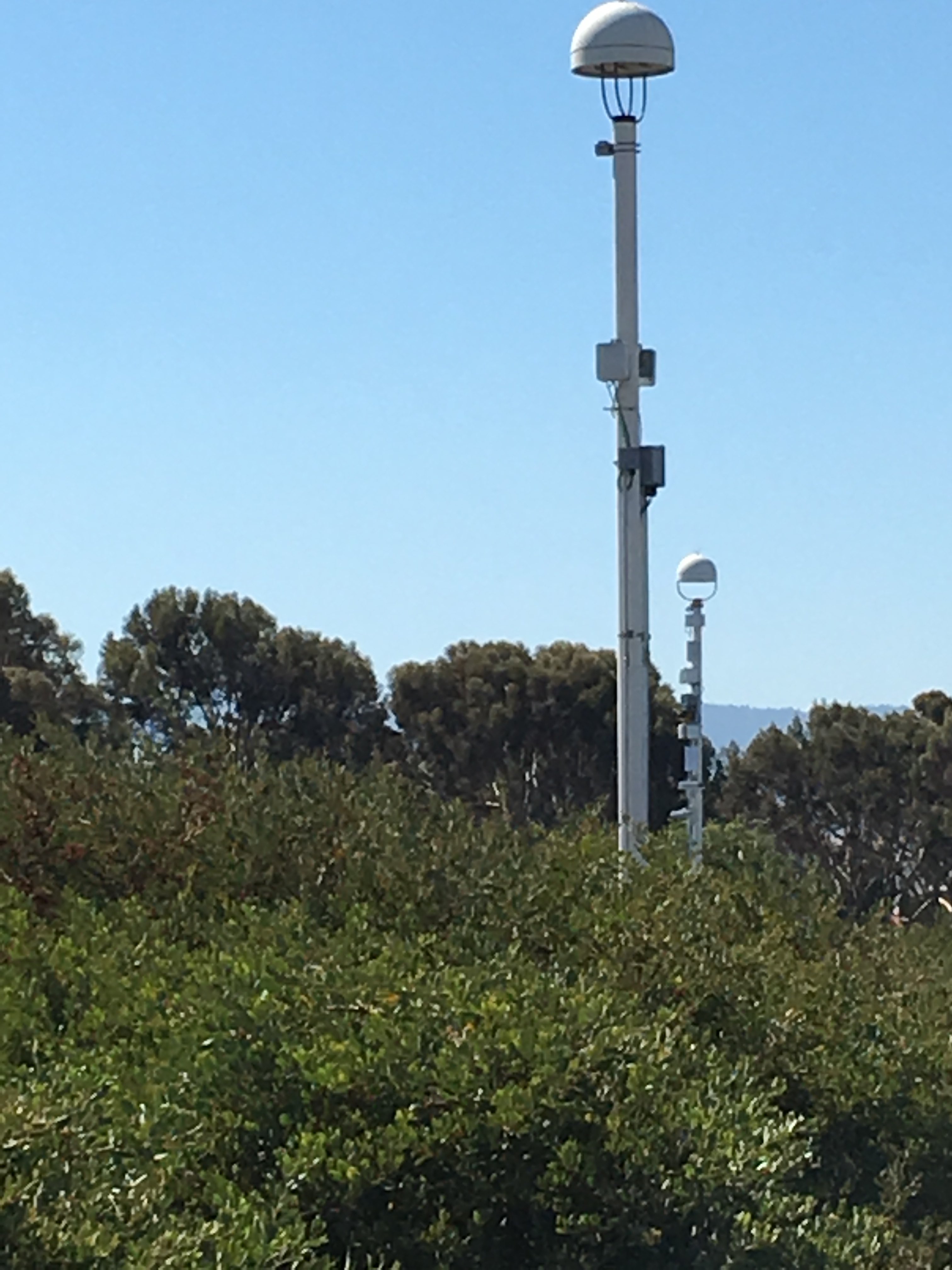 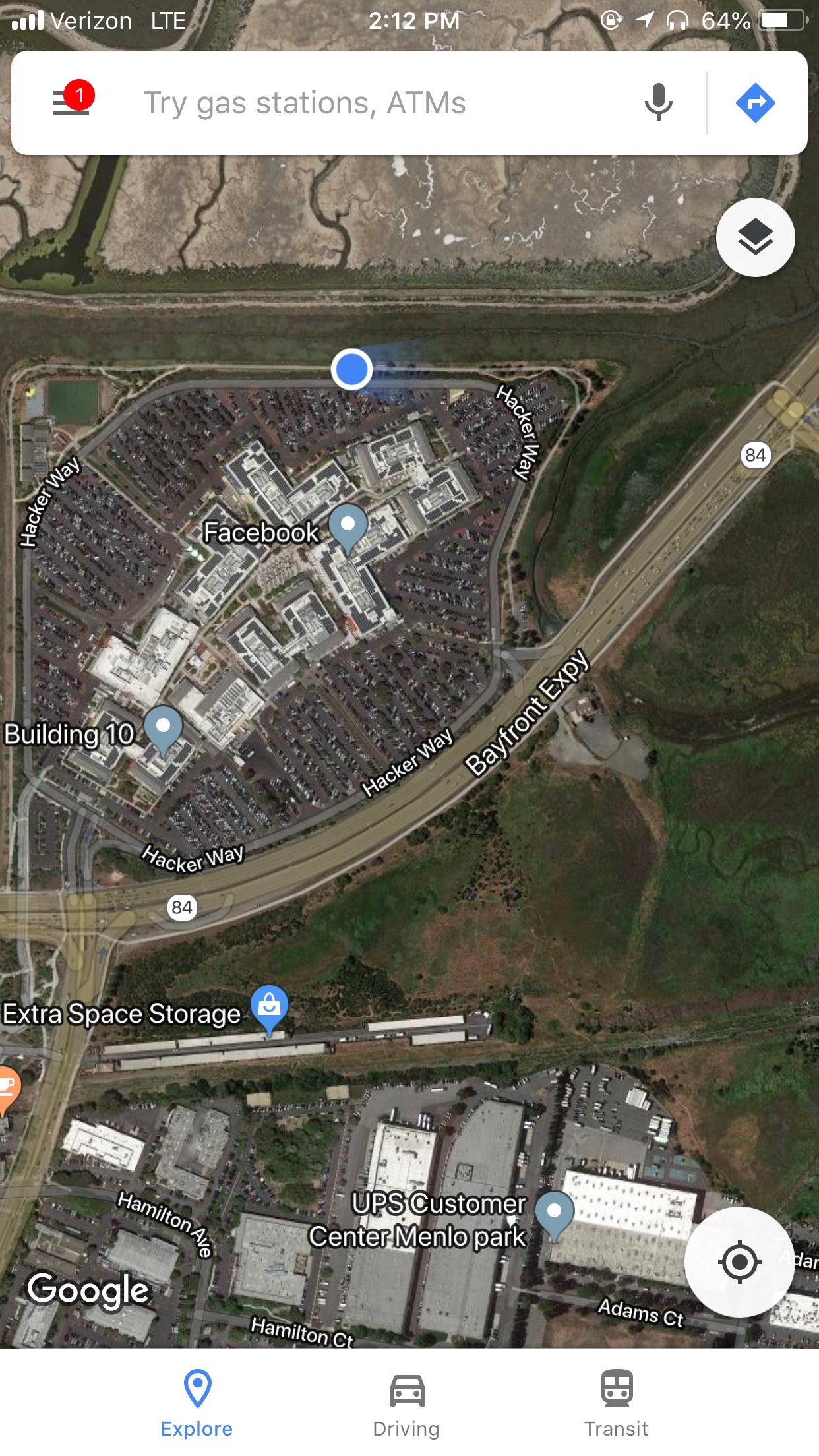 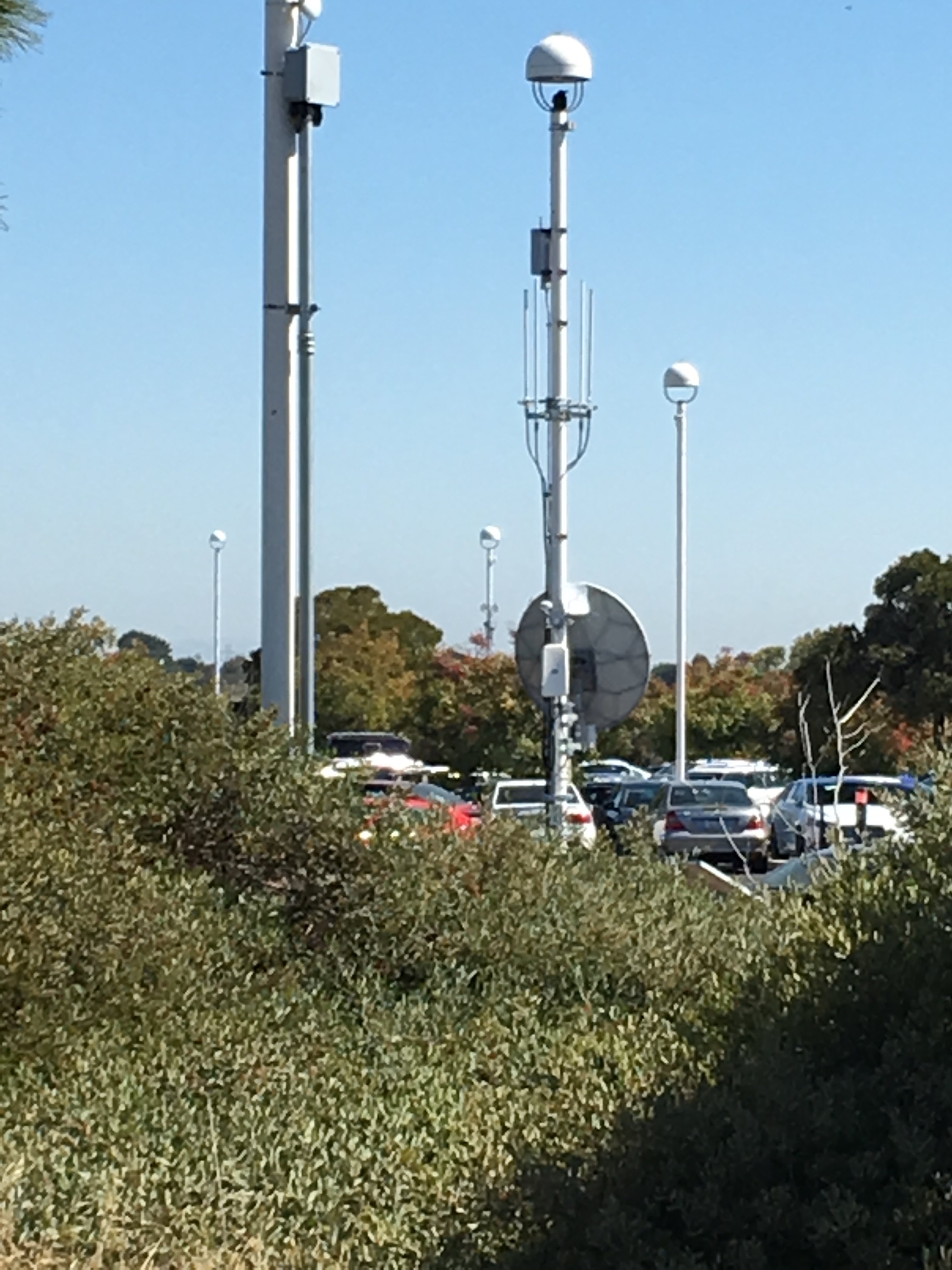 Those are for directing the orbital mind control lasers. 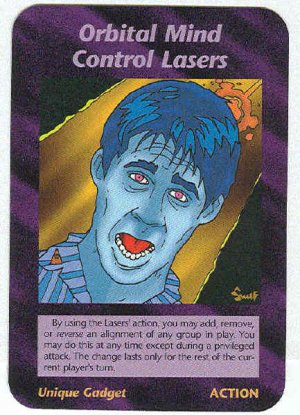 I have a classmate that works there, but I think he's travelling out of the country right now. I shot him a message asking but haven't heard back from him.

posted on Sep, 22 2018 @ 07:00 PM
link
Look like some LED lights to me, especially if they are on every pole. LED lights for perimeter security or something similar.

What band ? What are they transmitting ? No idea...

posted on Sep, 22 2018 @ 07:10 PM
link
Yeah, its likely all about security on campuses to help keep folks safe. I imagine cameras an surveillance stuff.
Also being connected. I imagine dorms need alot of internet connections. Wireless capabilities for alot of people in a small area.

I thought they meant the globe looking light attachment... which i think is a wireless antenna capable of handling loads of internet users. Wild guess.

Sweet Im curious as it seems excessive. I have plenty of Facebook neighbors but tech companies are like 'Fight Club" they NEVER talk about their work

originally posted by: CX
Apologies, just reread your post, so the top bits are lights, it's all the attachments you are asking about?

Yes, I edited my op to reflect that. The top domes are the parking lot lights and I have been there for years all the way back to when it was the Sun Microsystem campus. The relays and the like with conduits to power it
edit on 9/22/18 by FredT because: (no reason given)

Yeah, its likely all about security on campuses to help keep folks safe. I imagine cameras an surveillance stuff.
Also being connected. I imagine dorms need alot of internet connections. Wireless capabilities for alot of people in a small area.

I can buy a few but this is excessive by any standard for security. I bike around alot and venture into the campuses of Google, Rukus, Intel, Symantic, Linkedin, Apple (who have gestapo like security), AMD, Lockheed, Space Systems loral, etc etc etc and none have this kind of excessive antennas etc

As far as wireless they are all on the perimeter of the campus in the parking areas only. I could not see any internal poles with them. Unless they are so pressed for office space that people are working in the cars LOL. These guys like most tech companies will not do a ton of business over wifi cause it can be intercepted

posted on Sep, 22 2018 @ 07:40 PM
link
I'm wondering if perhaps they could be using the place as a testing ground for the 'internet of things', they're rolling that out near me soon, those antenna-looking things are what I'm expecting to start popping up.

Could be for sure. Its any number of possibilities. Like I said in the OP I'm not saying its sinister or anything like that but just odd given the number

It interesting, whatever it is.

New things like that that pop-up around me tend to catch my eye as well,

posted on Sep, 22 2018 @ 09:52 PM
link
It is clearly some form of radar/transmission signal blocker. Now that Trump has called them out, they're utilizing the military tech that they believe will protect them.

posted on Sep, 22 2018 @ 09:53 PM
link
My first impression was more like a radar grid. They look like some kind of electromagnetic transmitter. I don't really understand how so many so close would be beneficial for purely communications purposes. There is some purpose to it to be spending money on it.

How security is quick onto any new people on campus does raise some questions on where they are getting their information. Having cameras and thing like facial and other recognition procedures would not surprise too many people for a place like Facebook. Having a variable and adaptable EM sensing grid would be cool for more extreme threats like ghosts, aliens, invisibility suits and other EM fluctuation of an unknown source. Getting it tuned to handle altering environments like fire and storms is a tricky one.

On a serious note - a few of those, the small rectangular white boxes. Those do look an awful lot like the new 5G frequency transmitters. They are small like that compared to what we are used to seeing on cell towers and are starting to pop up on towers/buildings if you keep an eye out.