What is the Real Accurate number of the amount of Illegal Immigrants in the U.S.?

posted on Sep, 22 2018 @ 09:44 AM
link
We've been told by the Media that the number of Illegals in the U.S. is roughly 11 or so Million for years now. The current estimate of 11.3 million is based on the Census Bureau’s annual American Community Survey. “It’s been the only method used for the last three decades,” says Fazel‐Zarandi.

I've always thought that number seemed strange, that it never really has changed in recent years and the the way the 11 M number was arrived at lacked precision, to be generous with that term. The 11 Million number is based on U.S. Census data of people (Illegal Immigrants) who are trying to hide from the government. As the Researchers put it:


First, it requires reaching a representative sample of all those born outside of the United States. Second, it requires accurate responses from survey respondents when asked where they were born, and whether they are American citizens. It is plausible that undocumented immigrants are more difficult to locate (and survey) than other foreign-born residents of the United States, and if contacted, undocumented immigrants might misreport their country of origin, citizenship, and/or number of household residents fearing the possible consequences of revealing their true status. Any of these circumstances would lead to underestimating the true number of undocumented immigrants.

The new estimate uses new sources of data, such as the fingerprints of migrants caught at the Mexican border, said Mohammad Fazel‐Zarandi, a senior lecturer at the MIT Sloan School of Management.

The academics expected their techniques to show the population is smaller than the consensus estimate of 11.3 million. “Our original idea was just to do a sanity check on the existing number,” said Edward Kaplan, operations research professor at Yale. “Instead of a number which was smaller, we got a number that was 50 percent higher. That caused us to scratch our heads.”


The Results of more than 1 Million Runs of this data suggests that the REAL number of Illegal Immigrants is at least 14 Million on the very low end of the spectrum to about 38 Million on the High end. The Mean of that data is about 21 Million and the Researchers Conservative estimate is about 17 Million, all far above the 11.3 M that we have been told for decades now.

The Method they used to arrive at their results was based on something called Operations Research, gleaning information from a variety of other sources and data points to arrive at your estimate.

Operations research is a skill that extracts accurate estimates from scraps of data. It began in World War II when academics were enlisted to help track Nazi U-boats and weapons-production. For example, the academics used scraps of information to conclude that the Nazis produced 270 Panther tanks in February 1944. After the war, captured factory data showed the production of 276 Panthers in that month.

The Researchers were expecting their number to come in below the 11.3M number of Illegal Immigrants, what they came up with was something else:


The figure [below] also shows our conservative estimate of 16.7 million in Red, and the most widely accepted estimate heretofore of 11.3 million in Blue on the far left. We note that this last estimate is for 2015, but should be comparable since both the estimates based on the survey approach and our modeling approach indicate that the number of undocumented immigrants has remained relatively constant in recent years. Finally, the mean estimate of 22.1 million is shown in black in the center of the distribution.

We ran 1,000,000 trials simulating the model. For each trial we recorded the total number of undocumented immigrants predicted to be in the U.S. in each year from 1990 through 2016 for that trial. 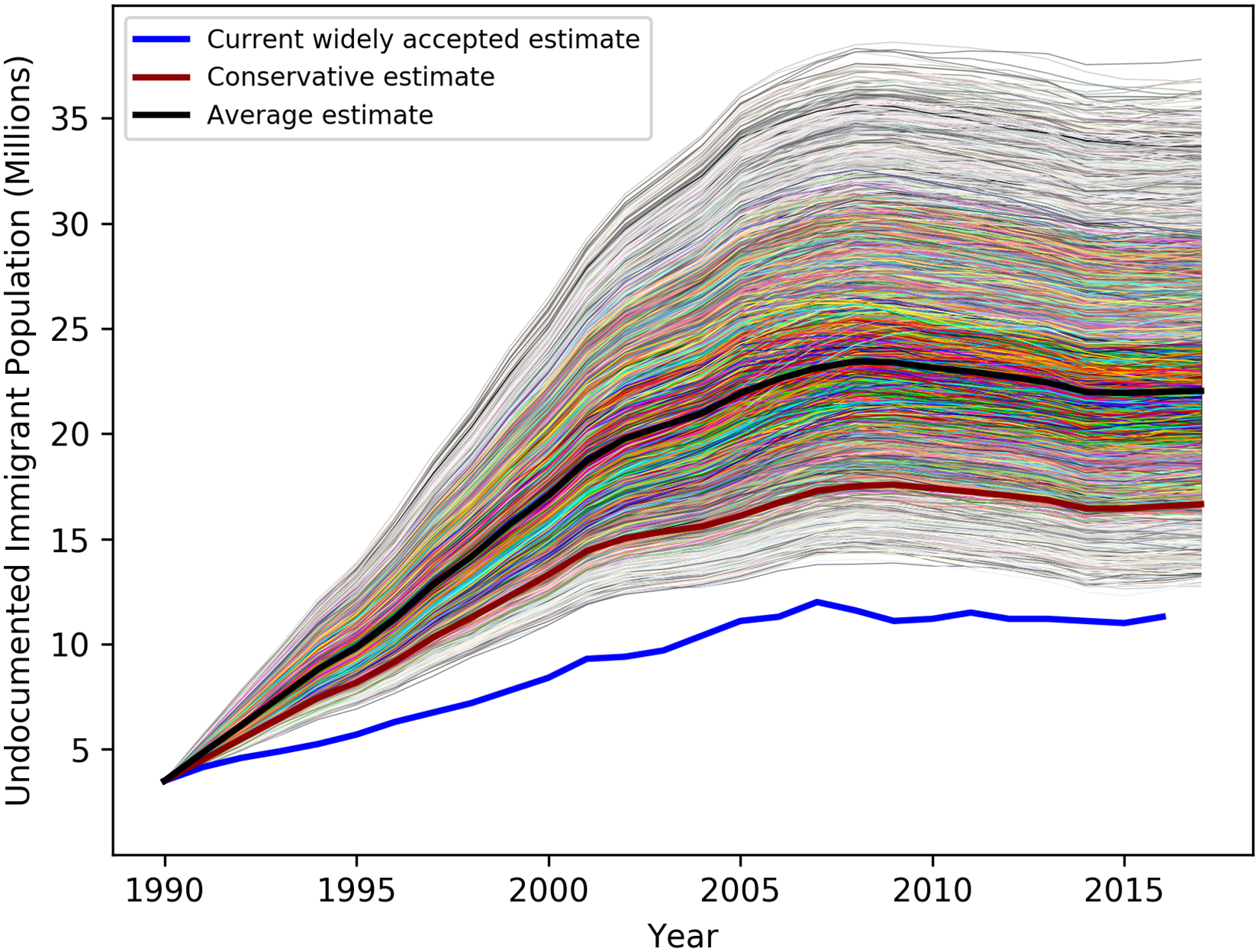 The results of our analysis are clear: The number of undocumented immigrants in the United States is estimated to be substantially larger than has been appreciated at least in widely accepted previous estimates. Even an estimate based on what we view as conservative assumptions, in some cases unrealistically so, generates an estimate of 16.7 million, well above the conventional estimate of 11.3 million. The mean of our simulations, which range over more standard but still conservative parameter values, is 22.1 million, essentially twice the current widely accepted estimate; the ninety-five percent probability interval is [16.2,29.5]. Even for the scenario presuming net inflows of 0.5 million per year for 1990-98 our results still exceed the current estimates substantially. The mean estimate is 17.0 million with a 95% probability interval of 13.5 million to 21.1 million. The conservative estimate for this scenario is 14.0 million, still significantly above the widely accepted estimate of 11.3 million.

Here is the link to the Excel file where they based their findings on, using their own Conservative estimates:

So when one of them does, you will care then?

PraetorianAZ
+2 more
posted on Sep, 22 2018 @ 10:13 AM
link
Well, an illegal immigrant murdered my friend by shooting him in the face over a pack of smokes.

All the criminals need to go.

They do harm you. You just don't realize it. They keep wages artificially low per the law of supply and demand. They also cause the government to spend money on them that could be used for US citizens. They cause your health insurance and healthcare to cost more because they are not insured.

posted on Sep, 22 2018 @ 10:30 AM
link
Its hard to tell...but in Canada we are being overrun by Americans....it is not uncommon to see 25-30 year old men wearing stupid childish looking pants and hats and clothing that is absolutely inappropriate ….in Canada we do not have adult males walking that silly looking gang-walk all around....societally crippled and stunted...and very comfortable surviving as that.....you don't see grown men acting like teenagers in gangs....it is the 20-35 year male age group in America that has been crippled.....when these men come to another country from America where they are encouraged to not mature it is difficult to integrate them into employment commensurate to their ages hence they make less money and get crappier jobs and REMAIN MIFFED OFF AT THE WORLD ...its equally easy to spot for example Fillipino illegals because they are LEGION and are an IDENTIFIED GLOBAL NETWORK THAT CAN DO MASSIVE ECONOMIC DAMAGE TO A COUNTRY BEFORE THEY ARE IDENTIFIED AND STOPPED...these little buggers come in huge numbers and take over BUSINESSES they MONOPOLISE by volunteering free labor in large numbers until they screw enough business out of competitors and tilt things their way and then they pay themselves handsomely with others money once they dominate a marketplace and can jack up prices on everyone ,these types really hurt Countries they target .If you play by the rules you have to work just as hard in America or Canada to make a living and to find success as you would have to at home wherever you are from....it makes me EXTREMELY ANGRY to think about people who want to break those rules and screw every single person in the Country they are trying to economically rape and pillage....I believe they should be dealt with with a very heavy hand....any of these types who are involved in business or asset ownership and growthby illegal means or methods need to be hammered hard.I am taking a local Coffee shop owner to task because every day when I go to the busuness I see only one racial profile and one gender profile present...over 20 employees and this is the case in a country that is a cultural mosaic.....lol...its blasphemy......like I said the economic theft and manipulations can break a COUNTRIES BACK....if you wish to see diversity and equality and equity then we must demand DIVERSITY FIRST....DEMAND IT....no cultural monopolies in business.

originally posted by: UnBreakable
a reply to: one4all

Illegal Americans are not numerous enough to cause economic problems people can easily see...they bring hard drugs and handguns and murder of mostly very young men as they build criminal footholds and gangland mentality usually,you can tell when they arrive in numbers by simply reading the newspaper and noting the crime types and numbers... and they CRUSH the social systems like the medical systems...no social/racial profiling is needed because we are discussing Canada right...these are mostly young black Americans between 18 and 35 ...and they fit in about as seamlessly as they would in Britain if they chose to try to BLEND in with the indigenous black culture in that country...lol...it is laughable because it is impossible....and its not only easy to identify Americans by this profiling the white Americans are just as easy to pick out they are like pink elephants in the room and are usually doing some type of white collar crime like illegally running a business.

originally posted by: Bluntone22
a reply to: one4all

originally posted by: ccseagull
a reply to: one4all


38 millionish people and a lot of real estate.....I dont know where you are from but I live in a major City...and I used to live on a farm as I graduated to bigger and bigger communities...so it is easy for me to illuminate the impacts of illegal immigrants in all of these areas....from rural farms to small towns to large cities....you must be a Helen Keller Clone.

originally posted by: Klassified
a reply to: pavil

Yeah, whatever.
Didn't all that happen before the United states existed?

You for got their impact on systems like schools.

Likely that the poster in question has higher property taxes to pay for educating children who can't speak English meaning the school needs special services and ESL systems, often for multiple different languages. After all, illegals don't just come from the Latin American countries. They can come from any other country and do.