— The deputy attorney general, Rod J. Rosenstein, suggested last year that he secretly record President Trump in the White House to expose the chaos consuming the administration, and he discussed recruiting cabinet members to invoke the 25th Amendment to remove Mr. Trump from office for being unfit.

Mr. Rosenstein then raised the idea of wearing a recording device or “wire,” as he put it, to secretly tape the president when he visited the White House. One participant asked whether Mr. Rosenstein was serious, and he replied animatedly that he was.

The New York Times’s story is inaccurate and factually incorrect,” he said in a statement. “I will not further comment on a story based on anonymous sources who are obviously biased against the department and are advancing their own personal agenda. But let me be clear about this: Based on my personal dealings with the president, there is no basis to invoke the 25th Amendment.”

Uhoh
the msm is turning on those they previously backed with devotion...
wonder why that is....
edit on 21/9/2018 by shooterbrody because: (no reason given)

posted on Sep, 21 2018 @ 01:21 PM
link
First thing I thought of reading through all this...I'm betting NYT got played by the administration, and they put this out there as a pretext to firing Rosenstein.

Failing NewYork Times and Washington Compost are both behind a paywall.


Kharron
+3 more
posted on Sep, 21 2018 @ 01:23 PM
link
Here's the thing -- we've seen stories of Kelly calling him an idiot, Mattis calling him a child pretty much, others calling him incompetent etc.

Every single person denied it, and all members on this website believe the denial, with NO questions asked.

Rosenstein is implicated in saying something similar and BAM... New York times is the golden child of accuracy!

Rosenstein also denied the allegations like all the others did. Are all the other stories about the White House and name calling true as well?

Or are they all untrue, including this one?


The suggestion itself was remarkable. While informants or undercover agents regularly use concealed listening devices to surreptitiously gather evidence for federal investigators, they are typically targeting drug kingpins and Mafia bosses in criminal investigations, not a president viewed as ineffectively conducting his duties.


wow
and while in a temp position as well

seems a whole lot of talking is going on


there are a lot of people who will never acknowledge that

So the letter NYTimes published is correct?

He is viewed as insane and people are actively resisting from within his own cabinet and his WH and trying to remove him?


"But let me be clear about this: Based on my personal dealings with the president, there is no basis to invoke the 25th Amendment,” he added.

well guess that will shut up all those attempting to use that to unseat trump?
that line alone was worth reading the times story

interesting chatter for a friday afternoon

Is it the media's attempt to get Trump to fire Rosenstien?
Or, is it a true story?

What we do know is that according to the media, the Special Counsel must now be reported as a scam. If they believe the person who appointed Mueller was suggesting wearing a wire, spying on the President and using the information to convince others to invoke the 25th, how in the world could they not say the SC should be stopped immediately?

I've lost track of who had the secret recordings, last I'd heard Omarosa had the Trump Tapes... 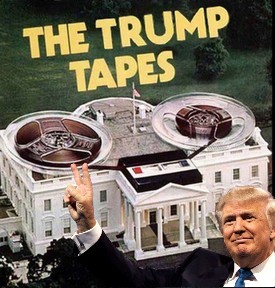 Who knows? But how do you make the decision to overthrow the govt after 2 weeks? Unless he was appointed to?

posted on Sep, 21 2018 @ 01:43 PM
link
To be sure, somebody is playing somebody here. If this claim is even remotely accurate, then Rosenstein might as well start clearing out his office now, because no force in heaven or earth will be able to save him from getting fired for rank insubordination.

On the other hand, if this story is garbage, then perhaps Trump just corralled Rosenstein into admitting that the "Trump is insane" stories are bullsh!t

Even more shocking from the NYT report... the information was handed over to Mueller! WTAF is he doing getting this information. It has nothing to do with his remit. It just shows again that Mueller is the defacto Attorney General with an unlimited remit, not appointed as a primary officer and not confirmed.

He has to be removed immediately.

Could be but who would be trying to get back at him for it? Obviously a staffer, if true, decided to tell Mueller RR’s intentions.

The NYT knows that when the # hits the fan to the sheeple they'll stop following all of these "news" networks that shared false and misleading information for these past 2 years.

Goodbye Rosenstein... I would have liked to have known you, but I was just a kid....