These men and women don't see 'race' period. A rescue is a rescue and what it takes to coordinate is phenomenal.

They are there to be a solution to a problem and working themselfs to death, sacrificing even their own lives if needed.

This entire bs is dream-up as racist, shame on the accusers.

And the swastika was used by Hitler. Now everyone back in time who ever drew the swastike is a racist biggot because of that?

I love your logic.

I don’t know this guy, and neither do you. That means neither of us can say anything with certainty regarding either scenario. Both scenarios are possible.

All I’m saying is, it’s a bit weird to not look at the camera while you are telling everyone that all was well, and it kind of looks like you are doing it quickly and secretively, so your boss doesn’t catch you.


Dude the guy is probably a yeoman and does not know wtf a scuba tank is.

Keep peddling your anger though.

I don’t know this guy, and neither do you. That means neither of us can say anything with certainty regarding either scenario. Both scenarios are possible.

All I’m saying is, it’s a bit weird to not look at the camera while you are telling everyone that all was well, and it kind of looks like you are doing it quickly and secretively, so your boss doesn’t catch you.


No but I can make an educated, and fairly thought out guess, since VERY FEW in the US are racsit, and even fewer even think that signal is a racist term, that hes NOT racist and hes giving the "All is ok' signal.

Which is a damn sight more plausible than the BS scenario you made up.

(post by howtonhawky removed for a manners violation)
WhiteHat

And even more insane is that the US Coast Guard could be so easily swayed by a bunch of tweeter trolls who only want a reason to be offended.

I cannot wonder if one of those righteous people would be drowning and a rescuer would come to help but made that "white supremacist" sign first would they let him rescue them or would they be so offended that they would prefer to drown and die?

Hopefully they would get a bit more perspective on what really matters, but I don't believe it will ever happen.
Really insane people.

Dude the guy is probably a yeoman and does not know wtf a scuba tank is.

Keep peddling your anger though.

Once again showing your complete ignorance of anything and that you profess to know things you dont! There is no yeoman in the coastguard
And all Coast Guard are SCUBA cert.......

Good Christ the amount of ignorant on this thread is astounding.

Keep peddling your willful ignorance though

Actually, look it up, yes they are......all coast guard are.....and again yeoman is not sought after, even if it was a yeoman is land based, not what people enlisted in the coastguard want.

See the issue her is I know my facts, and anyone this thread that decides to fact check you, will see it too.

The hilarious part is that the left doesn't understand how badly they have been trolled on this.

So the hoax campaign was made to make liberals look more stupid.

*glances back at OP*

Yeah, seems to be really hurting the Left.

This all goes back to the hazy line between the alt-right and "Trump supporters." The first people who started co-opting the OK sign on social media were clique that put on the Deploraball (Cernovich, Baked Alaska, Posobiec, etc).

Here you can see Baked Alaska, Posobiec and Irma Hinojosa doing it in October of 2016. (notice, that ain't February of 2017) 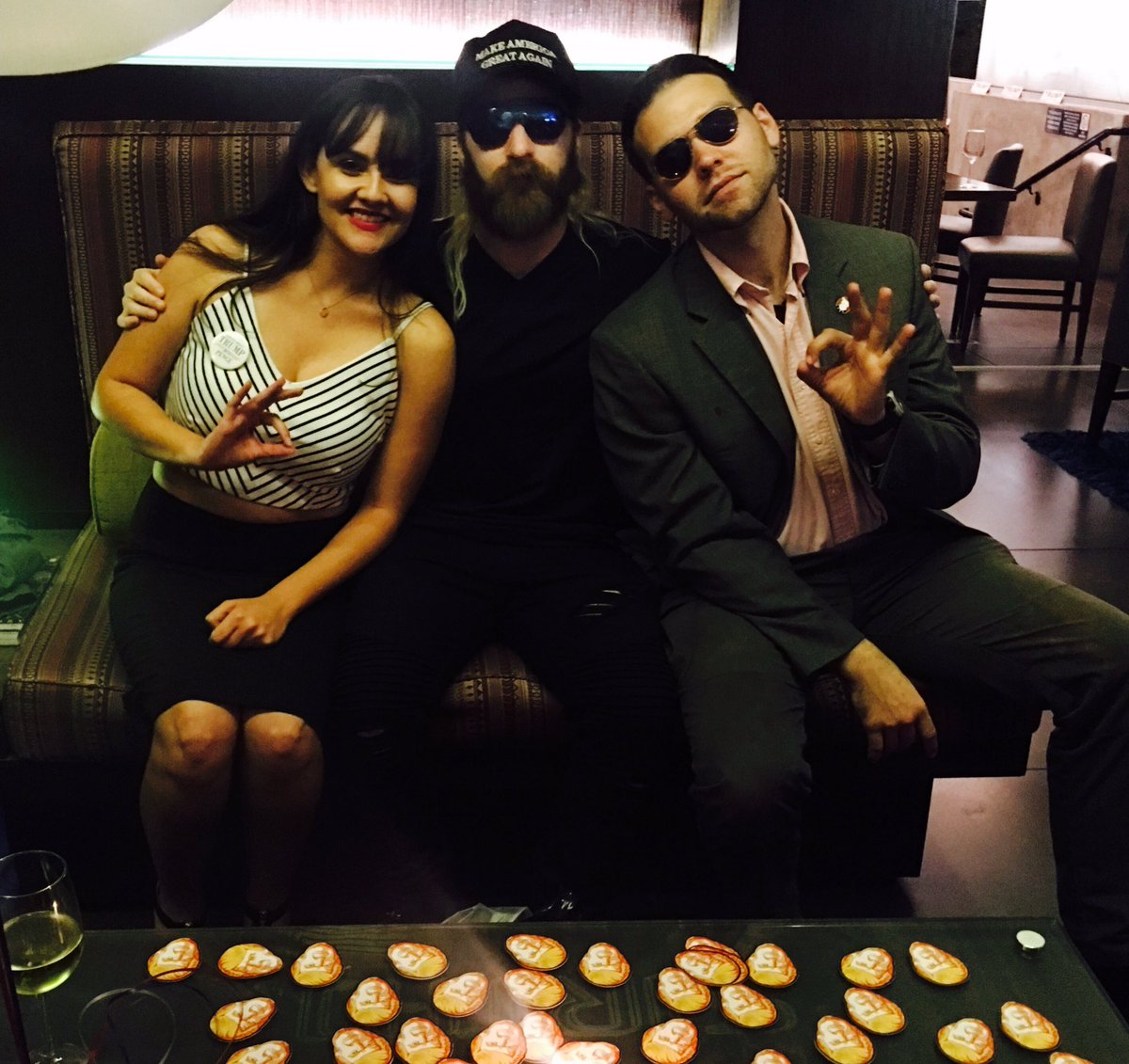 What do we know about these people? Well Baked Alaska went full alt-right. His Nazi salute # was embarrassing enough that he got disinvited from the Deploraball as Cernovich et al scrambled to clean up their backyard after Trump won. And of course Baked Alaska ended up at Charlottesville last year, chanting "blood and soil" and "Jews will not replace us." Here he is with Richard Spencer, Mr. Alt-Right himself. 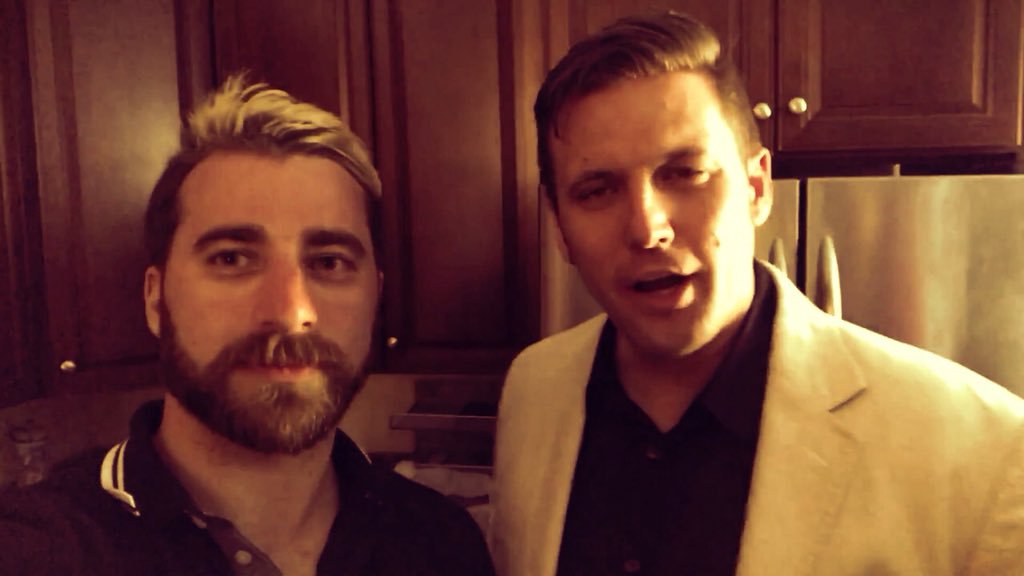 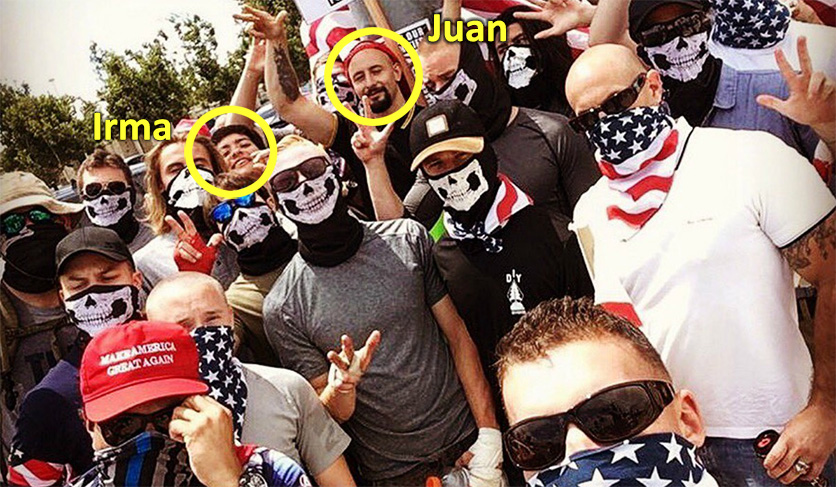 I can show you more pics of them together, video, articles, etc and I've called her and Juan out on it on Twitter. Irma told me she'd rather be friends with neo-Nazis than "commies."

Posobiec denies his ties now but two years ago he nothing but praise for Richard Spencer: 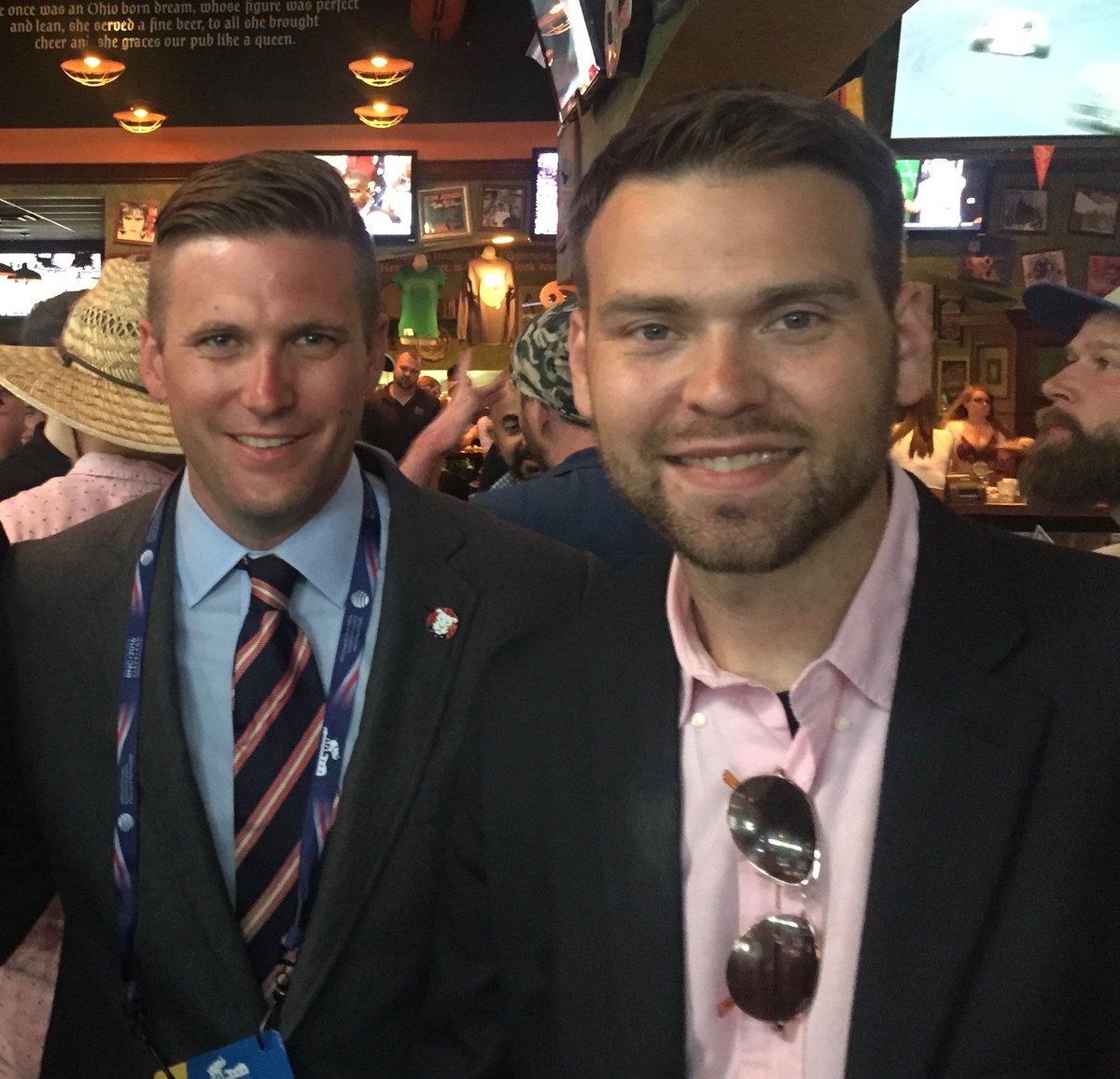 Posobiec’s relationship with Spencer, however, goes back at least a year. Last September he praised Spencer in two tweets as “indispensable” and said “the media can’t get enough of” him. Posobiec has since deleted both posts. Posobiec also posed with Spencer at the Republican National Committee where Trump won the GOP’s nomination last June.

A Newsweek analysis of Twitter shows there is significant overlap in the alt-right figures that both men follow on social media and that Posobiec and Spencer both followed each other on Twitter as recently as December 2016.

Posobiec was fired from Rebel media (itself with many ties to the Alt-Right) for what? Oh that's right, plagiarizing Jason Kessler, organizer of Unite the Right.

Now deleted tweets from Posobiec low key signalling the alt-right with 1488 references (let me know if this needs explaining): 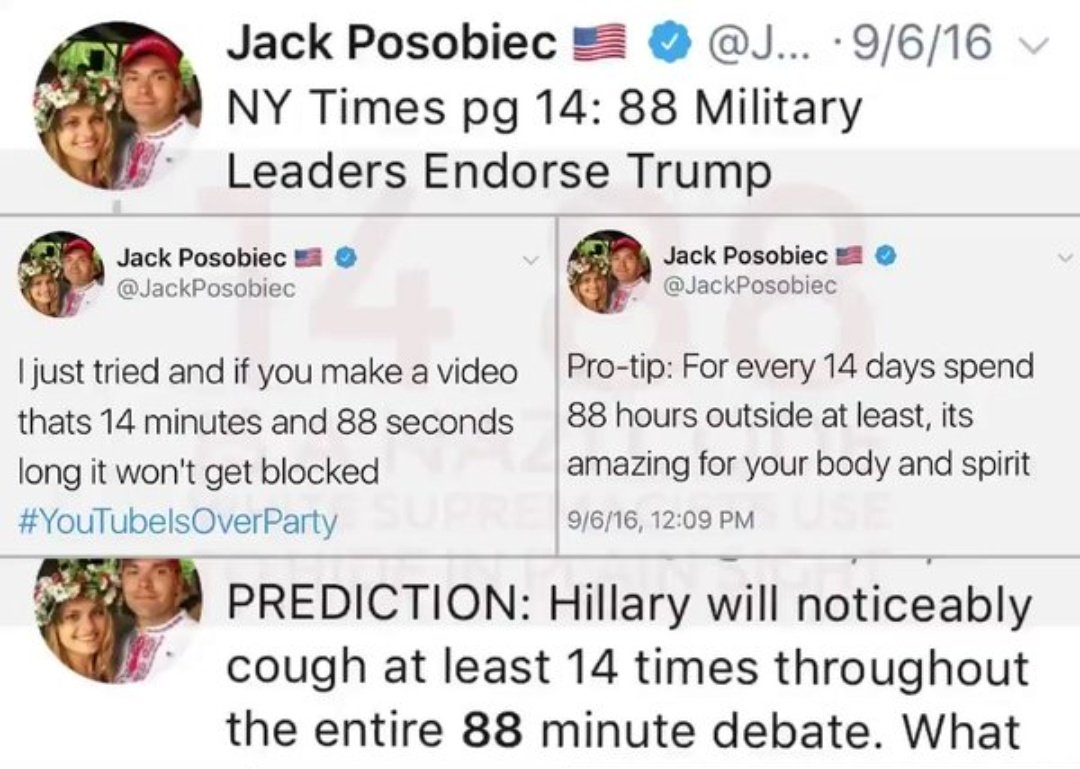 So... who is really trolling whom here? This # started with a bunch of alt-right people.

First thing they do after they have made their drop in a rescue situation, is signal "ok" to the boat or to the aircraft to let the crew know they are good to go and proceed.

I guess now thats racist and what they are signaling is "Screw black people" ?

You know, because that makes sense.
edit on 15-9-2018 by Whatthedoctorordered because: (no reason given)

Ahh yes , great , so youre saying that because 'some " idiots made it "racial" or .....well something because even that is very very flimsy.

That the left is so stupid, they now think the "ok" sign is racist, despite, at least a 100 years of it not being racist?


Yeah ok, if you want to say they're that damn dumb , i guess it makes sense.

For the rest of us with any common sense, were going to continue to use it, and not see it as racism. Why?

Because were not brain dead.


*glances back at OP*

Oh by the way "glances at the internet"

Jihadists and ISIS have been holding up the 'number one" finger to signify their solidarity with allah and reinforce their terroristic ideology .


We should probably stop holding up our index finger for number 1.


yes ......this is that stupid and so is anyone else who makes an excuse for it
edit on 15-9-2018 by Whatthedoctorordered because: (no reason given)

So... it doesn’t mean anything when Jihadists hold the number one finger up?


My Grandfather smoked his whole life. I was about 10 years old when my mother said to him, "If you ever want to see your grandchildren graduate, you have to stop immediately." Tears welled up in his eyes when he realized what exactly was at stake. He gave it up immediately. Three years later he died of lung cancer. It was really sad and destroyed me. My mother said to me- "Don't ever smoke. Please don't put your family through what your Grandfather put us through." I agreed. At 28, I have never touched a cigarette. I must say, I feel a very slight sense of regret for never having done it, because your post gave me cancer anyway.

So... it doesn’t mean anything when Jihadists hold the number one finger up?

No, it doesnt, not to me. or anyone else that has a thimble full of common sense.

But nice try to , again, avoid calling BS on a clearly BS issue with why this guy was removed.

Its really disgusting the fact you guys arent calling this out for what it is. Really shows that there is no barometer for whats right and wrong.

But hey, by any means necessary right? Even if it hurts innocent people!

Dont even reply , im literally disgusted by your attempts to play this off
edit on 15-9-2018 by Whatthedoctorordered because: (no reason given)

Well you are very much wrong on this.

You are still wrong even after admitting you were wrong and admitting you looked it up and you still are posting things that are not true all the way from yeoman not being a mos down to assuming i do not know what i am talking about on this issue. No all members are not yn's and it only shows that currently you are beyond rationalism and instead choose to think everyone is full of it if they have facts that prove you are not being honest or are misinformed.


Of course you are, you didnt have the facts. Nor do you have any clue what youre talking about