Manafort Pleads Guilty and Will Cooperate With Muller 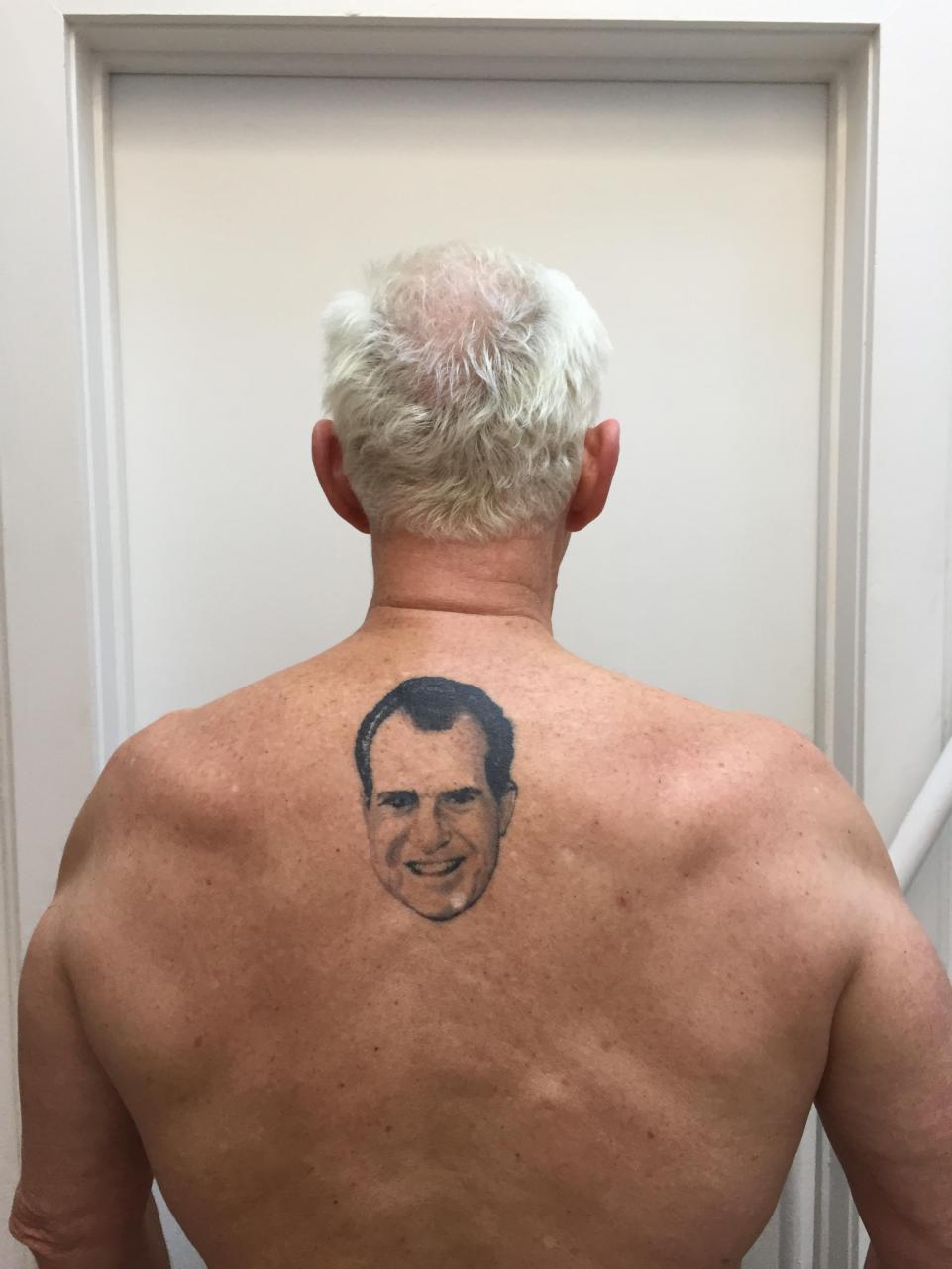 The ladies absolutely love that tat', alledgedly ...
The Dirty Trickster

What indicates to you that Mueller is wrapping up soon? He still has Roger Stone to deal with.


It was reported a couple of months ago, he was working on the Collusion portion of the investigation, and that it should be over in the fall....Now if its not its not. I do hope it is though, so we can see what Muller has. If not, sigh...…..I guess we wait some more.....

That was Rudy Guiliani trying to put some end time on this for Mueller. Mueller never agreed to that nor has he ever acknowledged anything that Rudy Guiliani has said on TV. Mueller doesn't play games. He doesnt play into the hands of the clowns who try to bait him.
I have not had any indication that this is anywhere near over. They keep indicting people which means more trials months down the road. This isnt over yet.

Holla when you get back to reality.

He has agreed to supply documents and testimony into the Russia investigation, it's right there in my OG post!

Manafort was at the tower meeting. Remember the one trump did not know about, and then dictated the adoption letter for Jr. Only right after that letter is shared with the American public, jr. Email "if its what you say I love it" was published 9n in the MSM.

Also jr. Called someone private 2xs during that meeting, trump knew nothing about.....


You dont see the big picture?

Muller made a deal, for his testimony and documents.


No, he now gets a reduction on his sentence for sure. If trump(I did say if) does go down he wont be able to help Manafort.

Like I said Manafort was at the tower meeting, he knows, if trump knew about the meeting and exactly what he knew! He took the plea, because he knows now he is up the creek. Taking a guaranteed lesser sentence, is better than rolling the dice with trump!

I misread your post. We are on the same page, but leaving what I posted above, sorry bout that.

Trump never wanted to save him.

Holla when you get back to reality.

If you think for one second this is a nothing burger, get ready for a FULL BELLY!

So many trump followers replies on this latest development, makes me wonder if they even read all of the article on the PLEA DEAL.

Mark Levin, would not take my phone call, when I told the screener I wanted to talk to him , about the adoption letter, how trump said he knew "nothing about the meeting", jrs email, and now Manaforts cooperation. As he was at that meeting, and has agreed to testify.

His screener said "oh no, we are not going down that road". I said why because everything I want to talk about the truth? Clearly damage control.

I, as anyone who has really been paying attention from the start, knew trump was bad news.

posted on Sep, 15 2018 @ 02:42 PM
link
Just like Nixon should have destroyed the tapes when he could, Trump should have pardoned Manafort long ago.

Actually, I think he still could but it may be too late

That comment was in reference to silly member stating that manafort lost everything.

He plead so that he could keep some stuff.

Well i am neither a trump supporter or hater.

Think of me as water reacting to the truth.

Levin sometimes is right on point and other times he carries agendas very well.

kudos for paying attention and getting involved.

originally posted by: Butterfinger
So nothing on Trump still?

You hope he has dirt on a meeting?

If thats a problem, then quick! continue to ignore the Left's immensely more widespread collusion and treason, and all the big hitters on their side.


You think a case that involves possible treason, foreign interference in our election etc. - is wrapped up in what? A few months? A year? Hilarious.

I sat on a Grand Jury that lasted nearly 9 months. Regarding.. real estate fraud. You seriously think this is a long time? Our legal system is so inundated with red tape, processes, and delayed proceedings, I think it's absolutely hilarious people were crying about the length of time.. at ONE YEAR!

And I honestly don't care - if nothing is dug up on Trump, good! If so, let justice be done. But something like this should be investigated. It's sad some of you honestly think because it's "your guy" he should be exempt from the laws of this nation. Anyone involved should be ferreted out. If Trump is not involved, great. But due process should be done. It's just hilarious how some of you have no idea how long legal proceeding take.

Historically to produce charges, these investigations last on average FOUR YEARS. "Omg.. it's been a year.. a year and a half.. LOL nothing to be found!" You folks have no idea what you are talking about.

Now there are a few things that we all should be interested in. The first would be what was the statement he would be required to make after pleading guilty. That is not known or reported on.

We will not get to see the evidence right now, so we have no way of knowing what all the government had on the man. No trial, the evidence is not needed, and thus that will be of some curiosity there.

As far as a pardon, that is a ship that has sailed, and ultimately will and will not work in favor of anyone. Anything that the man has stated, and from the first trial, he can be compelled to testify in court. If he lies, he still goes back to jail on the grounds of perjury. So now the question will be, what all has the man said to the special prosecutor. We do not know and things are starting to move now.

The ladies absolutely love that tat', alledgedly ...
The Dirty Trickster

I don't think that tat was inked for a ladies perspective ...


Why is this important critical breaking news in the Mud-Pit?!?! This is bigger than Florence!


Right. And it even has its own reporters rocking back and forth.


MANAFORT COOPERATING WITH MUELLER AGAINST DEMOCRATS!!

Ah, you poor thing. Beritbart took that story from NPR, and you didn't bother to go see what NPR actually said, did you?
If you want to stay honestly informed and not buy in to so many hateful misrepresented opinion pieces, you must follow through.

NPR gave scenarios of what Manafort MIGHT be testifying too. They don't know, and neither does Breitbart.

The price of avoiding the second trial was that Manafort has agreed to help prosecutors with "any and all matters" going forward, and there is no way to know whether that may involve Trump and Russia or things like the payments Cohen made to women to quiet their allegations about Trump ahead of Election Day — or something else.

Do you see how they take a little snip of an article, and turn it into a dishonest fabrication?
Do you? Will you permit yourself to see that?

originally posted by: fleabit
Just never you mind!
edit on 16-9-2018 by JohnnyCanuck because: (no reason given)

I hope everybody will read this article about what he's doing. (It's not long, easy reading)


From 1966 to 2017, the Justice Department sought just seven prosecutions under the Foreign Agents Registration Act, or FARA, which requires Americans working on behalf of foreign governments, foreign political parties, or any person or organization outside the U.S., to disclose who is paying them to do what.

"The perception out there in the regulated community is that it's a toothless statute," said Christopher DeLacy, a partner at law firm Holland & Knight and leader of the firm's political law team.

Then, in October, Mueller's office changed that when it indicted former Trump campaign chairman Paul Manafort and his longtime business associate Rick Gates — instantly becoming the highest-profile FARA prosecution ever.

Those charges have raised the question about whether Mueller has more up his sleeve for other people swept up in the Russia probe who could be connected with lobbying and influence work for foreign governments and entities.


We all have the common goal of wanting lobbyists out, right?