Why is the porcupine used to represent the libertarian party?

originally posted by: howtonhawky
So you and a friend are standing on the side of the road watchin cars go by. He tells you he is done with life and will walk in front of the next truck that passes by. What do you do?

Stop him from harming himself by removing his freewill cause it seems right?

Do you stand and watch him do it?

Do you stop him because of the damage he will do to the truck and driver?

I would answer this scenario in this way: As long as the government doesn't make it illegal to commit suicide (which is a pointless law on its premise, because you can't punish a dead person), the suicide is fine. The point about Libertarianism is more about how the government tries to control people, not how one citizen necessarily tries to control another (as the central reason for the party's existence, anyhow).

Yes, philosophically speaking, a die-hard robotic Libertarian would just let the person do what they wish, except like you said to JBurns, in this exact instance, his actions could cause another person to lose their life or, at the very least, purposefully destroy someone else's property. There is die-hard extremism, which is never healthy, and then there is the part about just being a human being.

But as a human being, most people would, out of a sense of compassion (right or wrong, it's irrelevant), try to stop the person because it's possible that this human being--your friend--can overcome whatever is causing the suicidal thoughts. See, human beings, and all living creatures, have a primal "program" to survive--hell, survival is what drives the need to eat, drink, sleep, seek medical care, etc.--so if someone has an urge to just end it all, no matter in what manner, I feel like I have a duty as a human being to at least try to help that person standing in front of me.

For the record the correct libertarian answer is to just walk away and go home or smoke with em!

Anything short of that leads to totalitarianism. Eventally
edit on 13-9-2018 by howtonhawky because: (no reason given)

In your world, then, I couldn't stop someone from actively trying to murder someone, either, because it would impede their right to free movement as an individual before they did anything to harm another person.

Knowing that this suicidal friend would most likely injure others and cause property damage because of their actions would overrule your "just walk away and go home" claim as being the right answer. But, really, it's a hypothetical scenario, and I don't have the will to really get much deeper into a debate than what I already have.

Your answer tells me that I would be uninterested in being your friend if I were suicidal and you were a Libertarian.

It starts with saving a friend and ends with attempting to silence the right or left because someone has preconceived ideas of what the other side will do.

These are the exact things the founding fathers thought about. It is noted in many writings by them at the time of foundation. Our entire form of governance is based on how a few people decided it would be best to treat each other.

The way one answers the question posed can in many cases tell much about the basic thoughts of the person answering. The same type of logic is used over and over in our everyday lives.

Ever heard the term thrown around "danger to yourself or others"? That is the authoritarianism credo.

Without that belief guiding their lives then our society looks very different.

Which video do you most identify with????


originally posted by: ScepticScot
Because its just a loads of pricks.....

Credit where credit is due....

Just out of curiosity, do you oppose the non-aggression principle or just the party itself?

I don't oppose the party because I am not American and they are a niche party that don't really need opposed.

I think the non aggression principle is a nice sounding simplification that has little basis in reality.

It starts with saving a friend and ends with attempting to silence the right or left because someone has preconceived ideas of what the other side will do. 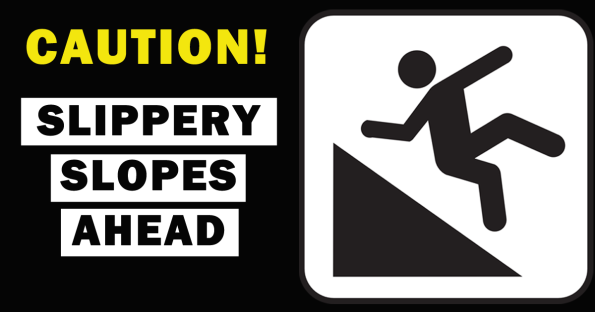 You're embracing and employing the slippery slope logical fallacy, and I prefer not to get into such silly debates based on such.

Not to mention that you comparing a friend trying to help a suicidal friend to a totalitarian government is one of the most ridiculous things that I've read lately--not to mention that such an argument is an epitomic example of the false equivalence logical fallacy, which, again, is a terrible foundation upon which to rest an argument.

When you get all of this figured out and can come at me logically, I may change my mind that this has become a pointless discussion, but not everything in life is black-and-white, or 0%-or-100%. There's plenty of room for critical thinking in your hypothetical that doesn't jump from friend-helping-friend immediately to totalitarian-government-and-we're-all-doomed.

Yea you are out of bounds with your rhetoric against my post.

I clearly explained my thought of how our small choices equal to the larger ones.

Open your eyes and perhaps notice that we as a country are on a slippery slope and my post did not put us there.

We started out libertarian and have evolved quickly toward totalitarianism.

The right and the left have both went in that direction and now or voting process is no longer about liberty but about CONTROL.

You may ask why we are at this point and a possible answer is that we no longer have the balls to walk away and let the idiot make the leap he desires into oncoming traffic.

is instantly being truck itself is an option? you know your friend will be suprised and curious?

posted on Sep, 14 2018 @ 11:05 AM
link
there is a different version of that thing. i think for moral questioning of self.
there is a train
five people i think criminals tied on rails after a junction
there is one normal person tied on rails on other rails

and you hold the control to switch the train on either rail. train will go on either one of those rails.

then i had thought..can i be the train?


can i be the train?

I think that saying bout the tree of liberty is fertilized with the blood of patriots comes to mind.

also the story where jesus sees a bunch of rich guys throwing money into the pot and a poor woman puts in all she has and he says she is the greatest among them....why? does he like breast or great sacrifice?

i think the question maker thought of that option too. or it is sad in either case to ask such a thing and it is an attack. but if there wasnt such an attack i wouldnt be able to discover the hidden option maybe.

There is no train?

I'm not saying that I disagree with your points that our government, over the past two centuries, has "slowly" devolved into an increasingly anti-liberty institution, but that doesn't mean that someone trying to help their friend live through suicidal thoughts and keep them from causing traffic accidents/property damage/injuries/death to other innocent people is a direct step toward authoritarian government.

That's my point--making that direct link between the two is hyperbolic and illogical, because not everybody seeks government office or government control. You just kept running with it, so I just had to call it out at this point in the discussion. If you call that "out of bounds," so be it. Nothing I can do about your interpretation of that.

And no, I would not let "the idiot" leap into traffic and possibly destroy the lives of others just because he doesn't like his plight in life. Your analogy just doesn't work in the way that you're using it. Sorry.

more importantly forget about this now. you cant imagine how many things i dont think each day.

Dude the saving friend part was just a meta4 for goodie two shoes up in our grills tellin us we can or can't do stuff.

You knew that though.


That is also a thought i have but at some point we have to mind our own business.

Sure i would try to stop him and offer him a smoke but i think that would be the extent of my intervention however from what i know of you from our previous encounters you may take it further by desiring to take him into custody or even putting him down if you had too. am i wrong?

Dude the saving friend part was just a meta4 for goodie two shoes up in our grills tellin us we can or can't do stuff.

You knew that though.

I did, and it was neat mental exercise, but not it has evolved into a "lesson" that it doesn't fit into anymore.


Sure i would try to stop him and offer him a smoke but i think that would be the extent of my intervention however from what i know of you from our previous encounters you may take it further by desiring to take him into custody or even putting him down if you had too. am i wrong?

If that's your opinion of me, you're just not paying attention.

Why would you assume that I would choose to arrest or kill my suicidal friend? That's an absolutely obnoxious thing to say. Like, sincerely asinine, if I'm being honest. Methinks you're trying to read between the lines a narrative that isn't there, if this is your conclusion.

You obviously know nothing about me, which is fine.


If that's your opinion of me, you're just not paying attention.

To be honest when i wrote that i was not thinking bout the friend part and was just viewing it as a person and you as a law enforcement official of some type. Just replace the whole part bout it being you and insert any givin person involved and givin power by the state or federal to be a part of law enforcement come across a person in that situation.

In that case my friend they would be duty bound to stop it at all cost and that highlights the authoritarian state we find ourselves in.

However i am trying to pay attention and srry bout the personalization.


And porcupine was used because all the cool ones were already taken.