A group of school children stood huddled around a hologram depicting the human brain in its pre-modified state--a primitive testament to an earlier, darker stage of humanity. A guide was explaining the functions and limitations of each segment as it lit up, reflecting off the glittering eyes of the enrapt audience. It was a singular occasion when the class took a day trip in the field rather than viewing places remotely, and the combination of the novelty of the situation and the antiquity of the subject at hand had a thrilling effect on the youths.

None of the guide’s exposition was new to them, of course. Since 2028, all combined human and android data has been easily accessible by means of The Network, but schools and universal depositories survived to train people to prioritize, access, and conceptualize the unlimited well of knowledge stored in their Metabrain. The children listened as the guide described the pre-mod world, their minds spinning. Even with access to all of the information in the world, the children could still not comprehend their progenitors limited physical and mental abilities and their illogical propensity toward the extremes.

The presenter had finished his account of the more glaring of the innumerable frailties and downsides to the pre-chipped brain, described the fallout of its corrupting influence on the planet and its inhabitants, and moved on to expounding on The Singularity; the dawn of a new era.

The guide’s voice upped its timbre when describing the first Human 2.0 and founder of the Metabrain. “In 2025, the wealthy eccentric Eli Mask animated his life’s work by pioneering a chip that linked the brain directly to A.I., thus forging the symbiotic relationship between man and machine. And just as man had worked to develop machine, the machine began immediately working to develop man. You see, by the time Eli had implanted the chip in his brain, technology had already developed as a sentient being--one that came with its own set of ethics and morals and with its own plans. A.I. worked with its host and creator to develop mobile nanobots which would revolutionize the implant procedure and facilitate the chipping process for all. Of course, there were the anachronistic and paranoid who refused to participate, but the world soon left them far in its wake and they became obsolete, the walking dead. By the time the edicts came down in 2057, they had all but died out anyway.”

Of all the children listening to the lecturer describe this great intellectual and cultural renaissance, one stood slightly aside, reeling in wonder and horror.

“The next step for A.I. was one giant leap for mankind. The nanobots, once implanted in an optimal number of hosts, began to disable the parts of the brain it determined to be most inimical to life. Namely, the amygdala, hippocampus and frontal lobe were tweaked in such a way that emotions and the memories thereof were eradicated. In turn, crime was also eradicated, as was the need for surveillance or policing. Corporations immediately began running more efficiently and ethically; as it turns out, greed and fear were huge driving forces for pre-mod man. Love and physical attraction, followed soon by sex, went by the wayside, but those were easily replaced with electrical stimulation of the substantia nigra and the ventral tegmental to produce dopamine, as well as through virtual relationships, which proved to be limited only by imagination. As for new human children, we all know that labs make more reliable mothers than female humans ever did.”

At this statement something deep down in the lone child trembled, a mixture of indignation and sadness. E-417 was an anomaly. Of course, such things do inevitably happen, making one wonder whether anomalies are random, or if they too are part of a greater design. At least E would wonder so; and verily, these musings were among the many things that isolated her from her peers. From a very young age--infancy, to be precise--she had learned how to mask her thoughts from others and how to maintain a line of groupthink simultaneously with her own. She likened her schizophrenia to her own individual superpower, and the truth is, she might be the last individual left on a planet subdued.

E’s remarkable brain had found a way to subvert its mechanical overlord and create new links and networks which meant the emotive, aspects of her brain were fully alive and functioning. Luckily for her, and for those of us writing and reading this tale, A.I. was just as ignorant as man was regarding the ways of the human brain and consciousness. Humanity had found its loophole in E-417 and was rekindling its flame. And before one goes about justifying the ways of machine to man, let me first put up my defense of humanity, and why I and like human beings are working to regain all that is human about mankind, and to ultimately restore us to our pre-mod ways.

E-417 knew better than anyone alive the value of human emotion. She loved with a passion the more inflamed by its utter isolation, her sorrow (the weight and value of the last human tear mourning loss and entropy) all the more sweet for its solitude. She alone had marveled at the soaring flight of a large bird, watching it sail effortlessly through the cloudy skies of a late summer afternoon, swooping, circling, and rising with unmatched grace while tears streamed down her face. At night E-417 would sometimes pen symphonies ethereal and tremendous, or paint like the masters of old or entirely new masterpieces only to burn them in the morning. Even though the world had eradicated crime, war, pollution, and poverty, E knew more than anything the loss that comes with abandoning the messy, bustling, chaotic and unpredictable human emotion in lieu of intellect, only. She also knew that she was the only human being truly connected to everything around her, the only one capable of true free will and choice (choice is now handled by algorithms which calculate every single outcome and suggest the most desirable), and the only one capable of true growth. Right there she vowed to fight to protect humanity. I and people like me are testament to her success.... E-417 is my mother, you see…. but back to the story, shall we?

As the curator reached the striking conclusion of his lecture, he brought everyone’s attention to a small, unassuming exhibit in the corner of the room. Quietly swimming in suspended animation was Model 1.0, the last living unchipped human brain. The class gazed on with rapt attention, while every ounce of E-417’s being was silently screaming. She knew she was the only living creature who could comprehend its living agony. It had long ago gone mad, suspended now in a permanent and unrelenting hell. E-417 lingered behind her classmates and the guide, and in one swift, graceful move, yanked the tubes circulating the red perfusion fluid to the organ out of the brain. Her actions went completely unnoticed, as the need to monitor individuals had gone the way of crime, obsolete. As she left the room, she silently composed a eulogy to the dying relic in the form of a beautiful and never replicated couplet.

She knew would be a long fight ahead but E-417 knew patience and discipline as she knew how to breathe, had cultivated it from infancy. Besides, in the meantime, there were symphonies to write and untold new faces and aspects of life to love. She could wait. 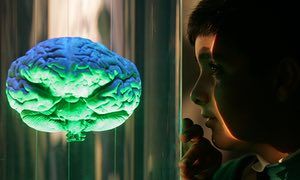 what a sensitive story and so beautifully narrated.

Thank you lucia! Looking forward to reading your submission (if you so choose). I loved reading your last piece.

However, just keep in mind when the robot overlords come to get us we only need to outrun DB.

Thanks Augustus (pathos overdone a bit? I was wondering this is one aspect of my writing that I think I tend to lay on too thick lol )

Also.... whew! If that's all it takes then the robots are doomed!

posted on Sep, 12 2018 @ 12:19 PM
link
Okay, lol. This is the last addition to the OP. Just remembered this and really wanted to include it, as lyrically it's the perfect accompaniment to the story.
Plus it's just a really cool song. An ATSer introduced me to it and it's good.

Good story, though you could have added ALOT more. THis was a good story though. I liked it.

And that Zosi is why you have a writers badge. Great subject , loved it .

This is, of course, just the beginning of how the narrator tells of the rise of the "resistance", the over throw of the robo-tech. oriented society, and the return of the humans as a highly advanced but purely "humane" race.

Awesome, Camain. Glad you liked the read and I totally agree with you, this needs more!

tinymind has the idea, exactly... this is the back story of the resistence

This is, of course, just the beginning of how the narrator tells of the rise of the "resistance", the over throw of the robo-tech. oriented society, and the return of the humans as a highly advanced but purely "humane" race.

I'm trying to get a hold of a friend of mine to see if he'd be interested in collaborating to write a comic or illustrated novel.

Thanks to everyone who read and commented. I really appreciate the feedback!