Federal deficit soars 32 percent to $895B

The federal deficit hit $895 billion in the first 11 months of fiscal 2018, an increase of $222 billion, or 32 percent, over the same period the previous year, according to the Congressional Budget Office (CBO).

The nonpartisan CBO reported that the central drivers of the increasing deficit were the Republican tax law and the bipartisan agreement to increase spending. As a result, revenue only rose 1 percent, failing to keep up with a 7 percent surge in spending, it added.

Are we going back to the typical but Obama! or Hillary! again? Or are we going to continue deflecting? What card shall we pull out tonight? It's a GOP Executive and a GOP controlled legislative. 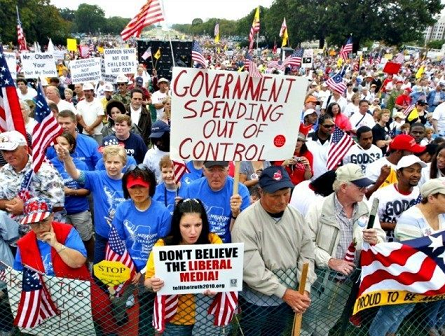 And why should we be surprised about the deficit? Republicans are calling for a new $638 billion (in favor of the rich by the way). Revelations from Bob Woodward's book that Trump Gary Cohn to 'print money' to lower the national debt. He just doesn't seem to care at all about big government spending. All those years of small government and fiscal responsibility thrown out the door, as if it was never a policy. It's astounding.

posted on Sep, 11 2018 @ 04:53 PM
link
Unfortunately,
our fiat currency is destroyed. Nothing can be done for it, the tipping point on inflation was reached years ago.
They know this- why cut spending when the currency is doomed to collapse anyway? All that would do is inconvenience them today.

Not that I support all this out of control spending- that's one of the many problems that got us here in the first place.

Because your daily "your team sucks" antagonistic threads are adding to the problem of 2 dipsh!t parties being used to pretend we get a say in how our lives are getting rigged and extracted for wealth, while a giant endless credit card is being run with our ss numbers.

You have turned into the instigating, red-headed stepchild.

Congrats, and thanks for wasting my time with more partisan political bs with no solutions other than a self-padding for your twisted ego.

The issue is that many times there are 'Plans' put in place with an administration that have to be countered in the future if they do not work. The previous administration spent so much money it will not take a few years to right the course but with the correct laws in place overtime it will improve.


The deficits from all these budgets total $6.786 trillion. But, like most presidents, Obama's contribution to the debt was higher. There's a difference between the deficit and the debt by president. All presidents can employ a sleight of hand to reduce the appearance of the deficit. They can borrow from federal retirement funds. For example, the Social Security Trust Fund has run a surplus since 1987. There were more working people contributing via payroll taxes than retired people withdrawing benefits.

Then there is the policies put in place that are still causing debt.

Trying to blame this on Trump is bull# but he wants to take claim for job numbers. f him. Obama screwed this country to the point that we are lucky if it comes back.

It is also not about the rich or the 1%. That bs needs to end too. Obamas #ty policies have put us where the country is today and step by step Trump is correcting it the best we can.

And you still want free healthcare and college? lol.

posted on Sep, 11 2018 @ 05:40 PM
link
You know it’s a rough time for the left when they have to act like they don’t like deficit spending. Remember- it only bad when it’s not obama doing it.

Medicare/medicaid nearly doubles what we spend on the military, social security isn't far behind. Money spent on illegal immigrants (from anywhere) are part of that number. And democrats hold these issue hostage by appealing to emotion.

Only one guy is trying to tackle trade. Hmmm.

I could swear just recently a thread existed discussing Obama's deficits being among the highest ever, you know what the typical leftist answer was?

Impossible! Obama told Medvedev he would be more flexible after the election!


You must be experiencing the Mandela effect. Actually, the bulk of the bailouts for financial institutions that were considered too big to fail started under George Bush. In early October of 2008, he signed the Emergency Economic Stabilization Act of 2008. It made available a total of 700 Billion dollars. Much of it was already committed by the time Obama took office. Obama's main contribution was to take action after Chrysler declared bankruptcy in April 2009 and GM was staring down the same dark hole a couple of months later. The loan to Chrysler was 8 Billion and GM got 30 Billion. Those were loans and were paid back. That saved a lot of jobs for the "little people".

Hush. No one wants to hear facts.

posted on Sep, 11 2018 @ 07:06 PM
link
the average citizen's ability to create has been severely limited by inflation and their lack of purchasing power combined with government regulation and mega corporate competition


Qauntitative easing, pumping billions into the market to keep interest rates low, absolutely fubaring anyone in the middle class that was trying to plan for retirement.

On top of continuing Bush's To big to fail, Obama could have done the right thing and pushed to stop the bailouts of big banks and mortgage companies instead he rolled over then doubled down by vowing to keep the interest rate low costing people who had managed to put money away quite a lot of cash over his 8 years.

To big to fail and qauntitative easing are linked, because it was pretty much the last arrow in the quiver for the fed.
edit on 11-9-2018 by Irishhaf because: (no reason given)


Impossible! Obama told Medvedev he would be more flexible after the election!


Bold part mine to stress

posted on Sep, 11 2018 @ 09:36 PM
link
Our government is paying for a hell of a lot of disasters these last too years. Seems like California is gaining the most amount of disaster funding lately. There has also been quite a bit of flooding which is draining the money out of the government.

You are spot on unfortunately. Personally - I believe Trumps main role on the stage is to oversee the implementation of a new financial/currency/monetary system.

That system being purely digital, a cryptocurrency operated on a centralized blockchain. Hello big brother in your wallet!

This new system comes with a preceding collapse of epic proportions ofc.
edit on 11-9-2018 by Lightdhype because: (no reason given)