What’s the rule? In short, players aren’t allowed to be coached during a Grand Slam match. According to the 2018 Grand Slam rule book: “Players shall not receive coaching during a match (including the warm-up).”

Well if we take the words according to how they are written then we can clearly see that serena is 100% correct.

She clearly stated to the ref that she did not receive the coaching.

He would have to have caught her looking at her cheater coach and he did not do that.

Gestapo ref needs to be fired and match replayed.

Something other than the public shaming of her needs to happen. Step one fire that coach?

You're an ignorant P.O.S. baby

What am I ignorant to at this juncture?

I have the hots for Maxine Waters, shes so dreamy, so forget Serena.

originally posted by: Sookiechacha
Then, there's the whole issue of her not being able to wear long (compression) pants, that were made to help blood flow because she has blood clotting issues. So, she showed up in a tutu and compression tights! That, the org is okay with! metro.co.uk...

Why shouldnt they be able to wear about whatever there is that allows them to play at their finest?

For any hardcore or invested sports fans: How many times have you shouted or gestured at the television, or even at a live sporting event, with no intention of being heard or seen? It is easy for many to get caught up in the action and have a reaction of some sort.

I actually believe this is likely to be what happened.

Well he actually said clearly in an interview that he was cheating.

Serena said clearly that she was not receiving any help and had not looked at him.

Maybe he has a crush on the japanese player or he secretly hates serena.

I missed that interview, thanks.

She deals with enough controversy and distraction. I hope he is dealt with accordingly.

posted on Sep, 10 2018 @ 05:12 PM
link
The way I look at it, are the things she did against the rules? If so, and she was penalized for them, that's a good thing, because she was in the wrong. The cheating part is up for debate because who can honestly say she didn't see the coach? let's throw that part out. Breaking a racket and repeatedly yelling at the ref...are those against the rules? Then don't complain about your punishment.
I am 100% for gender equality, and I do believe that men are treated better than women in sports, and that needs to change (thanks for starting that, surfing!). However, the way she is going about it is wrong. If what she did is actually against the rules, she should own it.
Personally, whenever I see a professional athlete acting the way she did, I immediately hope that they get a penalty. There is no excuse to behave like a child when you're a role model for millions of people. Have some class. The same goes for males that do the same thing. Don't throw a fit just because you're losing. Clearly, Osaka wasn't cheating, she was just out-playing Williams. Williams getting frustrated with her performance is one thing, but breaking a racket and then complaining that the ref called her out for breaking it? That's throwing a tantrum, something professional athletes shouldn't do. Then, continually yelling at the ref, and demanding an apology, DURING the match?! That takes it to the point that it sounds like she's trying to distract from the fact that she's losing and trying to find another way to win, since she was being out-played.
edit on 10-9-2018 by narrator because: wording


because who can honestly say she didn't see the coach? let's throw that part out.

Actually in this day and age we can indeed track her eye movement.

They do it very much in sports.

Ok, let's say we're able to definitively conclude that she didn't look at the coach. What about the rest of the offenses?

originally posted by: Illumimasontruth
I'm not even convinced her coach was trying to cheat.

For any hardcore or invested sports fans: How many times have you shouted or gestured at the television, or even at a live sporting event, with no intention of being heard or seen? It is easy for many to get caught up in the action and have a reaction of some sort.

I actually believe this is likely to be what happened.

I had no clue this would even be "cheating" in Tennis, that it was even possible to cheat in Tennis.

But now that we've cleared this up I'm envisioning an all new contact sport, that's sort of half Tennis and half Baseball / Baseketball, or would it be half Baseball and half Baseketball / Tennis? Look, you have the tennis part mostly normal, but with the twist of a dugout of dudes doing that whole baseball hand signals code talk thing with the players, and the players themselves talking smack taunting the other players on and off the court to spice things up. Maybe have special bout where the net is removed the middle allowing them to shoulder check each other, and / or a sort of 'cage match' with an arena plexiglass dome over top to add a sort of racketball element.

And then Serena could really beat the piss out of every body.

IMO, the idiot that acused her of cheating, that made this whole non issue a big deal and distracted her during an important match, should be kicked out of the tenis world.

Tenis WOULD suck ass this way. Thats why its not appealing to most people. Its boring and rife with stupid non sports related rules.

originally posted by: narrator
a reply to: howtonhawky

Ok, let's say we're able to definitively conclude that she didn't look at the coach. What about the rest of the offenses?

The rest would be beside the point if we could conclude she did not receive any help.

I have never liked her and i care not for feminism or women's rights movements but after seeing all the facts here i am a fan her now.

Fact is the ref was wrong for calling out the coach for trying to cheat when he should have watched serena to see if she was receiving help. That is what the rules state that she is not allowed to receive help.

The rest of the offences are also unprecedented since many male players are coming out and many videos are surfacing that show in the past there were no points or fines for temper tantrums.


However i suffer from authoritarian phobia.

Hahaha!!! That would liven up every modern sport.

Maybe the cage could randomly drop at a set number of times per event. Then factor cage performance as 50% of the final score for any athlete left standing?

Hell I'd even watch womens basketball for that. 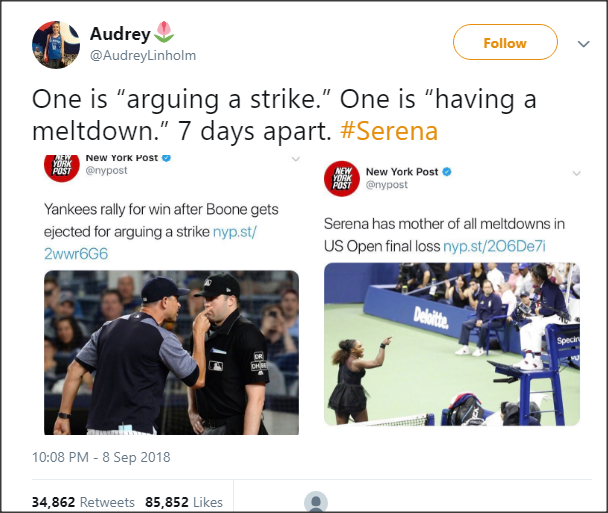 Most use hand signs

I said it on the other thread, I'll say it here.

An argument is male tennis players get away with being jack a**es so it must be OK for the women to do it. I am not sure the in and outs of the professional tennis organization which runs the US Open but they must be pathetic.

This is your brand. Your bread and butter. And you allow professional adults (male or female) to rant around, break stuff, and carry on? It's freekin' tennis for gosh sakes. Right up there with golf and horses trotting around in a circle.

The coach admitted he was cheating. He signaled move closer to the net. The video clearly shows her moving closer to the net. The announcer even mentions it. Whether this cost the match or not is hypothetical and irrelevant. She accuses the judge of acting unprofessional at the same time she is acting unprofessional. Sounds like trying to cover your tracks.

She knew she was getting beat. Instead of choosing some grace and maturity or playing harder, well....

Hahaha!!! That would liven up every modern sport.

Maybe the cage could randomly drop at a set number of times per event. Then factor cage performance as 50% of the final score for any athlete left standing?

Hell I'd even watch womens basketball for that.

On Thanksgiving Sunday they can have them wear Hockey skates and pads, no net, racquetball dome over head.

He treats everyone that way. If that's the way he is and he's like that, then why does she get special treatment? Because she's Serena?

He's the dude who penalized Rafael Nader for slow play.
edit on 10-9-2018 by ketsuko because: (no reason given)

Nice providing all the facts on the "cheating" part