On the night of March 24th, 1975, a man named Giichi Shiota was at a landfill in Kawanoe when he stumbled across a sight that would force him to reassess his preconceived notions about the world in which he lived. According to Shiota’s report, sometime during the night he spied what he described as a “luminous,” suit-clad figure — not unlike the KINNULA HUMANOID — that seemed to be suspended in mid-air. Shiota would later estimate that this unusual entity — which he wasted no time in dubbing an “alien cosmonaut” — was hovering almost 7-feet off the ground and at a distance of approximately 300-feet away from him. Shiota, who had claimed to see a UFO in the past, was not alarmed by the apparently weightless apparition, but he did claim that he immediately developed a headache.

Astounded by the sight of this ostensibly alien entity, Shiota became obsessed with the notion of capturing this visitor on film in order to prove that his bizarre encounter was real and not a product of an over active imagination or worse, as some no doubt speculated. So — armed with no less than three cameras — it was with a grim determination that Shiota returned to the scene of his encounter night after night. While this sort of mania infects many who have had brushes with the unknown — opening up new doors of inquiry and foraging new obsession — most, sadly, are never able to get another glimpse beyond the veil. Shiota, however, proved to be an exception to the rule. On the night of March 31st — after a week of lurking in the landfill with dogged patience — Shiota claimed that he was suddenly stricken with another brutal headache. When he looked up he was what he described as a Shiota bluish-white electrical disturbance floating roughly 300-feet in front of him. Shiota had been staring, enthralled, at this anomalous, cloud-like formation for several minutes, when he testified that an almost 6-foot tall, humanoid apparition appeared in the midst of this disturbance. He stated that this unusual being leisurely descended until it was hovering just a foot off the ground. It was then that it began to “glide” toward the intrepid, amateur investigator. Shiota, to his credit, refused to succumb to panic and rose to the occasion, snapping photos as quickly as he could using his Nikomat EL camera and 200mm Nikkor lens. These pictures — which bear more than a passing resemblance to that of the METAL MAN OF FALKVILLE — have, for reasons difficult to ascertain, all but faded into ufological obscurity. The unknown entity had traversed more than half the distance between it and Shiota, when it suddenly veered to the right. The glowing “thing” then traveled in that direction at an extraordinary rate for about 30-feet before it disappeared. While it must have felt like an eternity, Shiota quickly determined that the entire event had lasted no more than a minute.


i made this thread more or less to celebrate the return of rob murphy and his amazingly well researched website cryptopia, wich i consider one of the best websites about the paranormal out there, dealing with obscure cases instead of the usual suspects (i am sure you know who i am talking about)
anyway this case is a interesting one not only due to the picture but also the story behind it, wich has the always obvious theatre feel wich is always present in CE3 experiences, here the "thing" was clearly trying to let be seen and later photographed by the witness
another oddity is the strange absence of a UFO where the thing came from , the way the UFOnaut was found is more similar to bigfoot or ghost encounters


All I saw was a blurry picture of someone in a dive suit.

posted on Sep, 8 2018 @ 07:34 PM
link
Hadn't seen this case before, and that picture is quite amazing. Definitely not human, the face is robotic looking.


I think the word amazing is overused

amazing for a potato

Thanks for the OP humanoidlord.

posted on Sep, 8 2018 @ 07:57 PM
link
Thanks for the heads up to his website- seems like the guy at least writes well, which is no longer a requirement for, well, any written media anymore, it seems.

But that picture; of course there is no way to know what that is. But since it's film: has it been analyzed by photo experts, do you know (the write-up didn't mention anything about that but I thought you might know, as you seem to research these types of cases well)? And especially since it's film, the negative could be analyzed. That still wouldn't tell us WHAT is in the photo (mannequin? Guy in a onesie and a helmet? A doll? What?) but it could at least tell us if there are any alterations or chicanery going on with the picture.
edit on 8-9-2018 by KansasGirl because: Question mark after ( )

posted on Sep, 8 2018 @ 08:03 PM
link
I am willing to ponder the possibility that this picture is the real thing taken by a witness, just for the sake of imagining what is possible.

I enhanced the image a little bit just for "fun" of course, and if the witness was honest and actually saw what he described in the report, then it is indeed pretty fascinating. 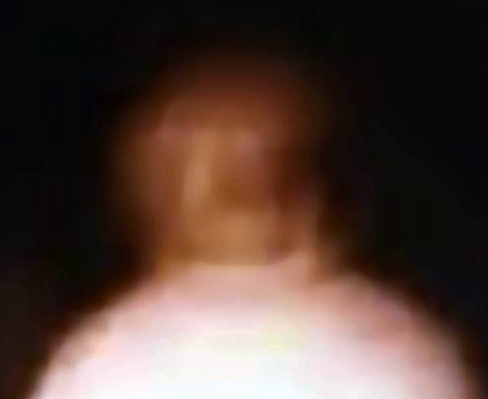 How would you like to encounter a creature like this in some land fill (garbage dump) late at night on Halloween?


I think the word amazing is overused


That is often true, and you won't hear the word "amazing" very often from those with very little, or no imagination about the universe's mysteries and possibilities.

Looks like a guy in a radio suit or chem suit maybe a respirator in the back and not on the face mask. Those thick rubber gloves dont look alien to me. Sorry bro

Can't say much about the blurred picture but this gets my s&f. Thanks for the website also!

Put yourself in the place of this guy and you can see why the photo would turn out blurry. It must have been a nerve grinding experience.

Great post, and thanks for your outstanding contributions to my favorite forum.

I was thinking a beekeeper's suit .


All I saw was a blurry picture of someone in a dive suit.


That isn't a dive suit.

I just blew it up. Holy hell... That face! It looks like Skeletor and 3PO's love child.

Did this poor guy go home and have to change his pants?

"It ain't human" That's for certain.

He sure looks like his feet are on the ground in that picture.


Ice Warrior from Classic Who. The shadows of the face are very similar.

posted on Sep, 9 2018 @ 12:10 AM
link
From OP...
"snapping photos as quickly as he could using his Nikomat EL camera and 200mm Nikkor lens. These pictures — which bear more than a passing resemblance to that of the METAL MAN OF FALKVILLE — have, for reasons difficult to ascertain, all but faded into ufological obscurity."
Where's the rest of the photo's?
They would certainty lend more credibility to the case if we could see the full sequence of pictures taken showing the "entity" in movement, one image on its own (in my opinion) doesn't prove much at all unfortunately.
Thats not to say that I don't believe it was real, its just in so many of these cases we get maybe one or two cryptic images, nearly always out of focus and generally not containing enough information to convey any real sense of authenticity.
Sadly though these days pictures or video that do actually capture the phenomenon well, even if 100% real will in most cases be written of as photo shopped or faked in the age of CGI and YouTube.
Really its come to the point were if its not seen with ones own eyes or caught on film by multiple witnesses it will be pretty much dismissed by most people.
edit on 9-9-2018 by Osirisvset because: Clarity

The photo does indeed show a "suit-clad figure".

Whether you believe the rest depends on how hard you want to believe I guess.
edit on 9-9-2018 by moebius because: (no reason given)