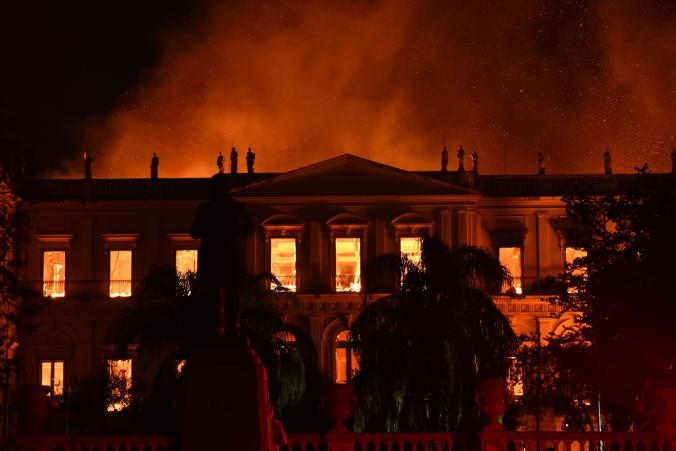 Major pieces of Brazil's scientific and cultural heritage went up in smoke on Sunday night, as a devastating fire ripped through much of Rio de Janeiro's Museu Nacional, or National Museum. Founded in 1818, the museum is Brazil's oldest scientific institution and one of the largest and most renowned museums in Latin America, amassing a collection of some 20 million scientifically and culturally invaluable artifacts.

The Museu Nacional's holdings include Luzia, an 11,500-year-old skull considered one of South America's oldest human fossils, as well as the bones of uniquely Brazilian creatures such as the long-necked dinosaur Maxakalisaurus. Because of the auction tastes of Brazil's 19th-century emperors, the Museu Nacional also ended up with Latin America's oldest collection of Egyptian mummies and artifacts.

In a Monday interview, Federal University of Espírito Santo paleontologist Taissa Rodrigues said that some of the metal cabinets containing fossils may have withstood the fire, though it's unclear whether the fossils inside survived. Duane Fonseca, a biologist at Brazil's Federal University of Rio Grande, reported on Twitter on Monday that technicians had saved some of the museum's more than 40,000 mollusk specimens.

But now, many of the fossils, the Egyptian collection, the museum's invertebrate specimens, and more artifacts housed in the main building are probably destroyed. The museum's fish and reptile specimens, herbarium, and library were housed separately and are thought to have survived.

It's not yet clear how the fire started, but it did begin after the museum was closed to the public, and no injuries have yet been reported. Firefighters worked through the night to douse the burnt-out shell of the main building, but it seems the blaze has already seared a gaping hole in many scientists' careers.

“In terms of [my] life-long research agenda, I'm pretty much lost,” says Marcus Guidoti, a Brazilian entomologist finishing up his Ph.D. in a program co-run by Brazil's Federal University of Rio Grande do Sul.

Guidoti studies lace bugs, an insect family with more than 2,000 species worldwide. The Museu Nacional held one of the world's largest lace bug collections, but the fire likely destroyed it and the rest of the museum's five million arthropod specimens.

Those type specimens can't be replaced, and they are crucial to understand the species. If I was willing to keep working on this family in this region of the globe, this was definitely a big hit.

Devastated.
Such a huge loss both in contents and to those that have been working with them for years.

Not saying it was but could easily have been a job where collectible & rare items were stolen and the place set on fire to make it look like all or most items were burnt to ash.

Or it could just be an accident.

Which one sounds more likely?

With all that it had inside it's an unmeasurable loss.

Maybe "they" stole all the good stuff and burnt it down as a cover up, yea that seems most likely.

posted on Sep, 3 2018 @ 04:01 PM
link
It' always depressing when a wealth of history is destroyed, whether it's a museum burning out, or any historical building, or even a bulldozer running through an ancient landscape as is happening where I live. It's an affront.

And all the ancient artifacts lost in the ME because religion...

posted on Sep, 3 2018 @ 09:49 PM
link
Definitely a great loss to science and culture. Hopefully there was some digital information recorded about the artifacts before they were destroyed. That would keep it from being a complete and total loss.

It's a shame they couldn't have gotten funding earlier. I believe all sites, across the globe, that contain irreplaceable cultural and scientific artifacts should have modern fire protection systems. This great loss may have been prevented by a simple sprinkler system.