Has Joy Reid been fired yet?

posted on Aug, 31 2018 @ 06:12 PM
link
Living in 2018, one thing you learn is that slipping up even one time and writing offensive slurs on the Internet can ruin your career or even your life. While I don't agree with the practice of punishing people for their free speech, there is no denying it happens. There appears to be one exception to this madness, however, and her name is Joy Reid.

Joy Reid operated a political blog for ~10 years before riding the anti-Trump/Russia "collusion" wave into a cushy political pundit job. Throughout the years, there was a number of times she apologized for writing "homophobic" comments on her political blog. This is why it was particularly confusing when Joy Reid was found to have made a handful of such statements years ago on the same blog (which has since been taken down, although you can still access it via archive.org) yet opted to blame a mysterious hacker instead of copping to the obvious blunder.

She even went so far as to speculate on Russian hacking involvement, and claims to have reported the incident to the Federal Bureau of Investigation last spring. Of course this claim was also unable to be substantiated, and I'd be very curious to see if FBI has made any progress. If not, it is clearly just another example of "Morning Joy" serving an extra helping of lies and obfuscations with her television talk-show appearances

So has Joy Reid ever been fired/disciplined and was the incident really reported to the FBI as Reid claimed?

I don't think Joy Reid should be immune from the ridicule so many others have faced for making the exact same types of comments on the Internet. Especially those with a colorful history of writing defamatory and discriminatory slurs on her blog.

To be clear, I don't give two hoots about the language she used. I don't care what language you use, that's your right. Free speech. However, I believe in fairness and eliminating double standards (something any true liberal would also support). Joy Reid's immediate use of the hacking/Russian angles smacks of the Clinton campaign's reaction to losing the election. Of course she started out blaming Comey, Bernie voters and Jill Stein. The Russia angle evolved - unusually enough - despite President Obama's own denial of it ever occurring, after it became clear Trump's Presidency would not be derailed. My point is that this goes to show you that they are not averse to invoking "hacking" and "Russians" as part of a lie, so why on Earth would anyone trust those claims?

Especially when all the evidence points to Joy Reid being responsible for the posts. Not only does she have an admitted history of it, but the only alternative is that a time-traveling hacker penetrated her blog in order to discredit a then-random poster on the Internet because he knew she'd be an ardent anti-Trumper and significant in the proliferation of Russia conspiracy theories. 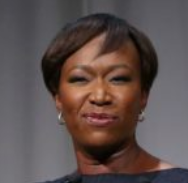 posted on Aug, 31 2018 @ 06:22 PM
link
In today's world firing her for homophobic comment's would be considered racist

She is a part of the PR arm of the Democrat party.

You know, the media.

She gets a free pass and will be celebrated behind closed doors, where the left drink and talk and mock anyone that doesn't think like them. She is a gold-card holding member of their plantation, you see.

A member of the protected class.

originally posted by: Sabrechucker
In today's world firing her for homophobic comment's would be considered racist

No doubt about that Sabrechucker, and it is unfortunate too. They will play any discrimination card they possibly can, but ignore them when it doesn't suit their interests/narrative.

Sad because LGBT individuals deserve the same rights and respect as any other American, and it is a shame Democrats have consistently treated them the same way they treat all of their monopolized minority groups. They treat these people like property, a vote they are owed and nothing more.

Trump holding the LGBT for Trump banner on stage during the campaign spoke volumes to me. Only GOP candidate in history to do that in fact To me it says "We should respect our fellow Americans right to self-determination"

posted on Aug, 31 2018 @ 06:49 PM
link
No different than the Blacks for Trump groups you keep seeing on social media/at his rallies. Our political movement is working toward the betterment of America and the lives of Americans. The reduction of public corruption, realizing true equality of liberty and ensuring the rights of all Citizens are upheld as sacred and immutable principles. Trump is focused on jobs and our economy, and achieving his predicted 4.1% GDP growth (OK-he actually predicted 4.0%)

A recent poll put Trump's support with black Americans at 30%, which really shows that so many Americans are cutting through the left's BS and boarding the Trump train. They want to take America back from globalists and establishment insiders who have used the people of this country for their own profit/personal gain for many years. All the while eroding Constitutional protects and forever walking the line between Constitutional/Unconstitutional always testing the water to see what it can get away with next.

Big government breeds corruption and it breeds bureaucracy - which is a state of systemic indifference and incompetence. Trump is the opposite of big government, and his loosening of regulations and slashing of taxes has put a lot of Americans back to work and reversed the Obama-era ridiculous black American unemployment rates to rates not seen in recent history or maybe ever)

Joy Reid has already tried to spin the "attacks" on her as racially motivated, yet her & her defenders are the only ones even bringing race into the fold. The challenges to her version of events are entirely fact based, and claims of racism/sexism are unfounded and irrelevant. The challenge to her narrative stands on its own two feet, and does not "attack" her for anything other than lying to cover up some idiotic remark, and them embarrassing herself by doubling down on the claims, pretending to contact the FBI and even mentioning the word "Russia"


(as an aside, does she still discuss Russia ad nauseum when she appears on TV?)

originally posted by: xuenchen
"I like being biased and arrogant at the same time"

She is (was?) one of the most prolific pushers of the Trump-Russia conspiracy theories so it is not trivial if she's given to lying (and especially in regard to "hacking" subject matter she covers)


Would be nice to see those days return

It is odd to see all the division highlighted by the Web, and in larger cities I'm sure it is worse. But here in this area (rural PA), we all still get along and come together in the same ways. Everyone that lives by us is treated as neighbors, and race/religion is not a factor in that. I am an old white guy and I gave my neighbor a ride to the post office recently, seeing as his boy had the car. They are a Muslim family, but topics discussed on the way in included plans for labor day bbq, fall coming up and all that stuff. Never did the issue of religion, race or any type of strife arise. Although we are both Trump voters, we differ in a few areas politically but discussion is always civil and informing

Whats Up with All these Zionist Jews Attacking the President lately ? Israelis seem to Admire him , but American Jews do not . Is it just a Political Thing or Something Else ? ..........Hmm....


Minorities are beginning to think for themselves, many want to abandon the democrat plantation.

Democrats believed they OWN the black and minorities votes.

They're doomed if they can't stop the exodus that is building.

Nope, can't have that.

posted on Aug, 31 2018 @ 08:06 PM
link
I dont care about her, at all, and havent really followed this story, but.......did she really insinuate the Russians hacked the blog posts to make her look homophobic?? If so, that would be insane, and quite frankly, hilarious.

It is good to see. It does not serve the interests of the Democrats for this demographic to be independent. It really doesn't serve them for anybody to be employed vs. dependent on big government bureaucracy and "programs"


Race relations were fine until Obama.
They turned the blame spicket on and broke the handle off.
Revisionist history is taught in schools (history with a social justice theme).
Hate is taught, it is not innate.

THIS A THOUSAND TIMES!!!

It's only wrong for Republicans.

If I had a son he would look like trayvon.