page: 1
29
log in
join
share:
shawmanfromny
+4 more
posted on Aug, 30 2018 @ 04:58 AM
link
I didn't find a thread on this and thought it was very interesting, considering the news on the 'supposed' hack of Hillary Clinton's emails by the Chinese government.

Former Australian Foreign Minister, Alexander Downer met with FBI agents in 2016 to share information he had about Russian meddling in the US election campaign, after meeting with Trump’s then foreign policy adviser, George Papadopoulos. Papadopoulos allegedly told Downer that Russia had dirt on Hillary Clinton. Papadopoulos later admitted to the FBI that he lied about his contacts with Russian operatives. Downer's meeting with the FBI in 2016, got the ball rolling on the Trump-Russian Collusion investigation.

...the information Downer gave the FBI was a major factor in the bureau’s decision to investigate allegations of collusion between Russian interests and the Trump campaign.

Smith claims the foundation received a “$25M financial advantage dishonestly obtained by deception” as a result of actions by Bill Clinton and Downer, who was then Australia’s minister of foreign affairs.

Also included in the Smith materials are evidence he believes shows “corrupt October 2006 backdating of false tender advertisements purporting to advertise the availability of a $15 million contract to provide HIV/AIDS services in Papua New Guinea on behalf of the Australian government after an agreement was already in place to pay the Clinton Foundation and/or associates.”-Lifezette

The Clinton Foundation has a rocky past. It was described as “a slush fund”, is still at the centre of an FBI investigation and was revealed to have spent more than $50 million on travel. Despite that, the official website for the charity shows contributions from both AUSAID and the Commonwealth of Australia, each worth between $10 million and $25 million.

What really grabbed my attention about Alexander Downer, is that he was "closely tied to a Chinese firm experts say is deeply involved in espionage against America."

Alexander Downer — the Australian diplomat whose tip to the FBI about a London pub conversation led to the massive probe of allegations of collusions between the 2016 Trump campaign and Russia — is himself closely tied to a Chinese firm experts say is deeply involved in espionage against America.

“We’re deeply concerned about the risks of allowing any company or entity that is beholden to foreign governments that don’t share our values to gain positions of power inside our telecommunications networks,” FBI Director Chris Wray told members of the Senate Intelligence Committee during a Feb. 13, 2018, hearing.

So, Alexander Downer gives millions of dollars to the Clinton Foundation as Australia’s minister of foreign affairs, launched the Trump-Russia investigation because of his tip to the FBI in 2016 and was a member of the board with a Chinese company linked to cyberwarfare on the US. Instead of politicians and the media attempting to connect Trump to the Russians, maybe they should investigate the strange link that connects Downer to the Clintons and Downer/Hillary to the Chinese. Remember how Hillary accused Trump of being Putin's puppet? Whose to say Hillary isn't China's puppet?

The dirty is being uncovered now.

It is SO deep that it might take years ‘till we discover everything.

But for now, someone needs to start investigating on Clinton - Chinesse connections.

Why am I not surprised - I would stir some of our politicians up - but I dont want to end up on some watch list. Maybe some of our US ATS friends could alert some Aussie authorities....

I mean, what are the chances that all of these shady corrupt individuals, companies and groups could all have ties to the Clintons. Surely there's no common factor of someone standing to benefit from these purely random anomalies of chance.

If Australia had dirt on Trump, that’s good

I get it now ..... it’s not the foreign involvement, it’s just that Trump won

Ahh Downer... still sitting in his bath tub playing with his model battleships, no doubt. 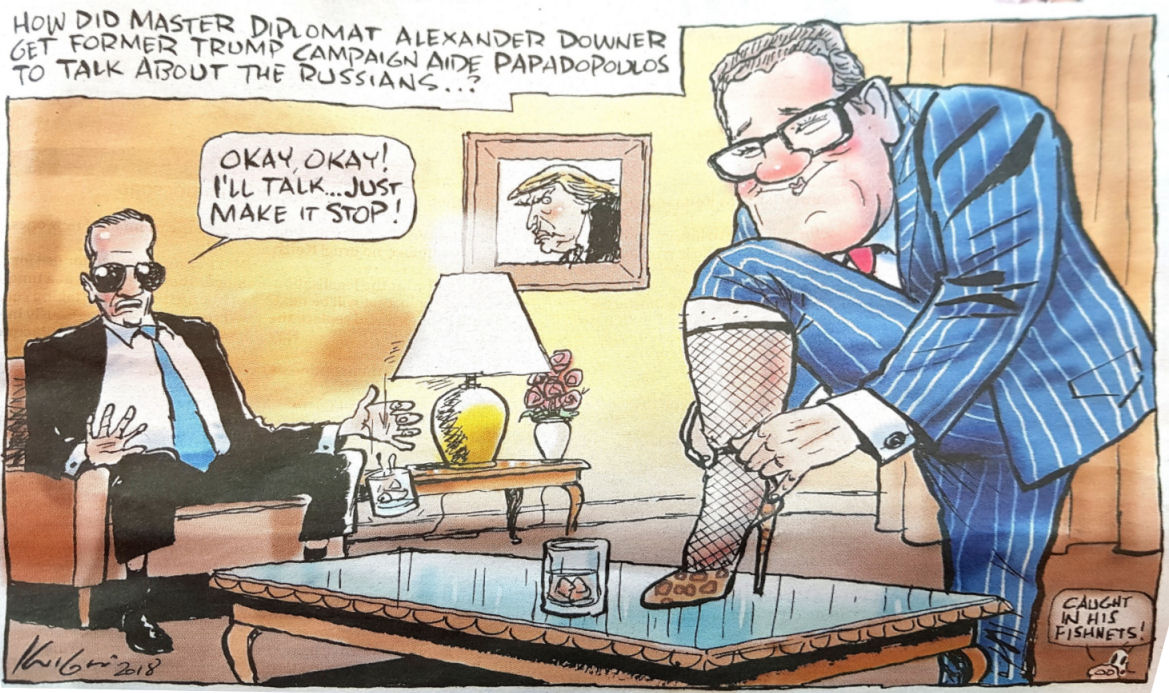 posted on Aug, 30 2018 @ 12:17 PM
link
Big surprise, the Australian "intelligence" source is not only a Clinton ally, but is also a foreign intelligence asset.

People need to spend the rest of their natural lives behind bars for this # show. If it is allowed to stand without full accountability, our system of government will cease to exist in a legitimate manner. Without total, absolute and unconditional accountability for these crimes we will be facing a Constitutional crisis unlike anything seen in this nation's short history
edit on 8/30/2018 by JBurns because: (no reason given)