The Baltic Sea Anomaly - a bunker?

There have been many theories on what it could be but none are conclusive. There are at least 4 features that resemble similar features found on bunkers especially if you take the object as the upside-down ceiling slab for a coastal defence structure.

In this webpage a virtual 3D model of the Baltic Sea Anomaly shows how the object could be an upside-down bunker.

posted on Aug, 22 2018 @ 08:21 AM
link
Forgot where I read this but wasn't it in the Baltic where they sent a deep sea submersible as they were towing out an oil platform. There way deep on the ocean floor were huge what were describe as looking like massive tank tracks going off in the distance.

thats got to be the best explaination Ive heard yet. Thanks for the article, this had fallen off my radar some time ago.

I still wonder about the supposed ziggarats off the northwest coast of Cuba, might need to go digging again.

I'm not an expert, but through my own research, a regular volcano has enough force to turn a 35k tonne rock into a projectile; however, that force is spread out over the whole of the eruption. A supervolcano has more than enough force to achieve the 2000km projection. To that end, there's a supervolcano 2000km away from the Baltic sea anomaly in Italy.

I wouldn't be surprised to find out that the anomaly is nothing more than a religious structure built/carved on the edge of a supervolcano thousands of years ago.

Its so odd it cant be natural, but this is about the most reasonable and realistic reasons for this, except how did it get there and why the skid marks on the ocean floor 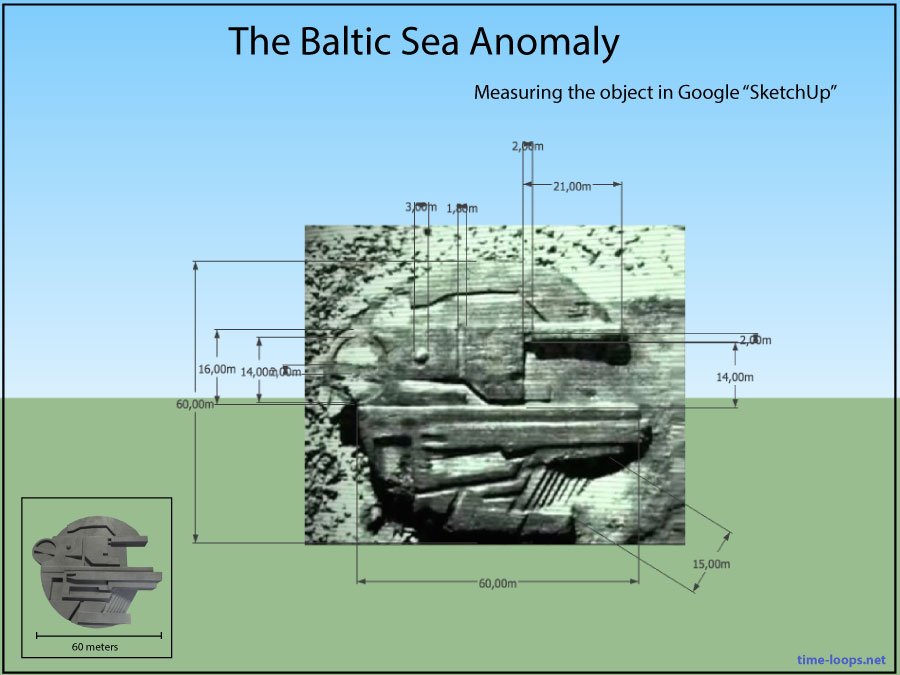 to me. in this latest attempt to explain the undersea object...looks to me most like a stylized head shot of a helmeted person/entity.... the helmet could be a spacesuit as it seems to have a visor in the upper front where eyes are located... all the other attachments could be video-cams or laser beam devices or breathing filters etc.

sort of similar to SWAT Team Tactical gear around the helmet only...

if the two anomales are linked together as some sort of ancient temple array, they should be studied together & not as individual pieces...perhaps thats the reason for the lack of coming to a conclusion of what each object might be or once was


let me suggest that this particular "platform" was once 'Stargate Portal'... since flooded over by the end of the ice age inundation

and the fashioned image of a space farer helmet survived the eons of erosion over time... to still Identify the Place of Purpose; dimensional gateway to Stars

posted on Aug, 22 2018 @ 03:34 PM
link
the baltic anomaly is a true puzzler, i have seen no good explanations to the trail raked across the sea leading into it

posted on Aug, 22 2018 @ 04:07 PM
link
This may be supported by the material analysis performed on samples from the anomaly- which, if I recall, showed was largely comprised of limonite and goethite. Interestingly enough, these are main ingredients in heavy weight concrete used for applications such as military bunkers.
edit on 22-8-2018 by Seanconnery because: Grammar

If it was of any real importance or interest our respective gooberments would be all over the thing considering its only 300 feet beneath the ocean.

posted on Aug, 22 2018 @ 04:09 PM
link
I find their computer renderings far too fanciful compared to the actual sonar scans of the thing.

posted on Aug, 22 2018 @ 04:18 PM
link
Great idea, but how did it end up all the way out there, simply too large for the German's to have shipped something like this over from Germany but of course it could have been floated over with some buoyancy aid's and lost in a storm, still even if they could have done that perhaps with the intent of using it to build a bunker on the Norwegian coast or as a kind of giant anti ship gun bunker as perhaps they tried to make there own version of the rock of Gibraltar but on the tip of Norway perhaps they simply did not have a crane large enough to ever move this object.

Of course it could still be the lid of a bunker but one even stranger than the UFO idea, a civilization as warlike as ourselves and therefore with a similar technology as far as weapon's were concerned but before ONE of the PREVIOUS glacial period's.

Which would make this thing extremely ancient and also from a time when human's were either supposedly hunting mammoth's in animal skin loin cloth's or swinging from tree's (well we all did that when we were a bit younger but I mean the species even though I do not actually believe the human evolutionary model, evolution in general yes but I think the human model is grossly wrong and made to push the monkey to human agenda which was so vociferously once used to justify slavery - not meaning to go off topic).

Personally I doubt it is German but they did have a motive and even had that whole giant gun thing for a while were bigger was thought to be better, if they could have established a viable giant shore battery installation on both sides of the entrance to the Baltic which they pretty much owned at that time it would have been a suitable show of power but even with there love of insane inventions and obvious ingenuity I believe shipping and then lifting something like this would have been beyond them during the war time period, if it had been peacetime however just maybe but then why ship it when it could have been built on site far more simply and with far less technical difficulty's.

So NOT the German's, who else could or would have done so, the Russians even at the height of the cold war would have had no motive since there investment was in ballistic missile's, tank's, helicopter gunship's and of course ballistic submarines and they had learned from the failure of both the Maginot line which the German's had bypassed and the Siegfried line which the western allies took, the German's own eastern wall was never completed but it is likely it would not have availed against Stalin's organ's anyway.

posted on Aug, 22 2018 @ 10:04 PM
link
I'd say it was an old temple that sunk after some activity caused the earth there to sink. It could have been built on a thick piece of shelf that was sticking out over that sea and it broke off. China is supposed to have a plate overhanging in one area, their subs can hide under there easily. The limestone plate could have cracked and the building slid into the sea long ago.

I just cannot say aliens or space ship right away, especially in areas that had lots of ruins there.

posted on Aug, 27 2018 @ 01:41 PM
link
I was looking into the thought of this being a coastal battery emplacement that was being transported via ship, as a one piece during world war 2. The problem is size and weight. I have not been able to locate anything during WW2 that would be able to carry 18000+ tonnes. That on average of 8000 tonnes more than ships could handle. So if this turns out to be a coastal emplacement it was not transported by conventional ships of the WW2 age.

1 : Who would build an upside-down bunker ?
2 : As far as I'm aware the area where the "Anomaly" resides has always been either under water or frozen so no access for anyone to build something there.

I actually think his idea has merit if being exceptionally unlikely, one answer as I suggested but I seriously doubt the kraut's could ever have pulled it off was to float a prefabricated reinforced concrete structure over to there intended destination to build a kind of gun's of Navarone type fortress emplacement but to control the Baltic strait's.

However that would be far too difficult when they could simply have poured the concrete on site with far less man power and cost, also it would have needed a suitable gun and even if the the jerry's had managed to build one large enough the area of coverage needed to hold the vast entrance to the Baltic would have been immense so accuracy at that time over that range would have rendered such a project a white elephant.

The volcanic idea is also quite unlikely, it could therefore be pre-ice age and yes it could have been a bunker of some kind but from the remains of a pre-ice age civilization we know nothing about and which many would swear could never have existed but some would say may have, this bunker then torn apart by the ice with a part of it carried out over the frozen Baltic on ice flow's, the ice melted and the structure then sank into the sea.

The slide mark nearby though seem's to complicate this and makes it far more likely that whatever it is it came in at speed and if so that leave's only a crashed machine of some kind or a towed and abandoned device perhaps of cold war provenance and perhaps of Soviet origin designed to interfere with underwater guidance systems since it is claimed that it interfere's with electronic's, it may be damaged or a failed experiment simply dumped down there but once again this seem's unlikely due to it's mass but of course it could contain winding's uses to generate it's field and also ballast tank's that may have increased its' buoyancy and made it a viable towed array of some kind but one which therefore presumably failed and was dumped - perhaps it has a nuclear reactor tucked away inside it somewhere as well since it is still apparently partially active if claims' of device failure are to be believed.
If it was this latter category of cold war technology it could also have been NATO in origin, perhaps to disrupt soviet submarines leaving there port via the Baltic and once again either a failed project or one that was never completed.

The volcanic answer is extremely unlikely for the region but not impossible.