posted on Aug, 20 2018 @ 06:38 PM
link
Just for something different, a leadership challenge has been actioned in Australian parliament, again!

Peter Dutton, the CIA Stooge who more resembles a Nazi has officially challenged Malcolm Turnbull for the Prime Ministership

MALCOLM Turnbull’s support in the Liberal party room has collapsed and he is facing the prospect of a leadership challenge as early as this morning.

Mr Turnbull has gutted two of his own signature policies in the last 24 hours in an effort to save himself, removing the carbon emissions target from the National Energy Guarantee (NEG) and depriving the big four banks of his company tax cuts.

A senior source has told The Daily Telegraph Mr Turnbull is “in panic mode” and “clearly rattled” amid reports Home Affairs Minister Peter Dutton is considering launching a leadership challenge at today’s Liberal party room meeting, which starts at 9am.

The Australian says nine of Mr Turnbull’s 18 Liberal cabinet colleagues have lost confidence in him, and the Prime Minister spent last night ringing MPs to shore up support.


I hate Turnbull ,but I am scared of Dutton. He's the man responsible for locking up children and families in detention facilities and making it illegal for the media to report on it.

That is a slippery slope.

After yesterdays embarrassing backflip by PM Turnbull on his energy policy, the sharks circled and challenged..

more dark days ahead for Australian Politics
edit on 20/8/18 by Agit8dChop because: (no reason given)

a challenge has been defeated. Turnbull has won the right to remain PM, but not by much

Mate, seriously the whole #ing system of politics is a joke.

but I am scared of Dutton

And so you should be, personally I'm bricking myself at the prospect of an authoritarian psycho running the show. He could possibly make Joh Bjelke-Petersen look like a Banana in Pajamas.

originally posted by: Grambler
a reply to: Agit8dChop


Anyone who goes against the status quo (the world over) is labelled a Nazi or something else along the lines of a loon. The local MSN gets on the band wagon (probably status quo directed) and drums Nazi into everyone's head ... In the end many societies get what their uninformed minds deserve but there are regrets everywhere.

Australians are having a hard time paying for electricity as they pay twice as much as say someone in New York city; which ain't cheap either. They bought into the whole global warming scheme and are probably one of the leading nations on cutting carbon emissions, WTG ? In the mean time the world has China and their big scale industrial pollution. youtu.be...

originally posted by: Grambler
a reply to: Agit8dChop


To a point yes, it is hyperbole.

But seriously, we're locking up children, elderly and all kinds in offshore detention facilities.
we've had hunger strikes, suicides, riots you name..

and Dutton demanded strict laws ensuring no media were allowed to report on it... ever!

While he isnt goose stepping... the mans got no heart for suffering... he has silenced the media and he is dangerous.

The media love this. A leader says "no". Then the outsiders attack like a pack of wolves. Media suddenly progress an attack on the leader. Can't leaders say "No'.

I guess it upsets the hormones of some.

Happens to the best of us in everyday life.

bally...not politically aligned to either party.

The man in the video is an ex comedian. He makes his living out of satirical commentry. No matter who it is he makes a joke of it. Please don't take this guy seriously.

Not withsaying, an intelligent man who uses his fan base to believe what he says, comically, is true. A tragic example of a big headed, ex government paid satirist,

I suspect this may have been the plan all along

originally posted by: toysforadults
expect a pendulum to swing hard right after the last few years and it's not going to be pretty

I suspect this may have been the plan all along

There are several factors at play, some people see it, some are totally ignorant of it.

1. The global Leftist movement to infiltrate, control governments, media & educational organisations supported by the UN and Soros types is really getting on the nose of many people, as people ability to research and learn about thngs via online resources expands.

2. Turdbull along with Bishop are Left leaning Socialists, put in power original as part of a UN sponsored coup, when Abbot (right leaning conservative) refused to sign the Paris Agreement. Was only Australia and Conservative Canadian Prime Minister at the time that refused to sign it, seeing what it was truly about - a socialist construct to redistribute Western nations wealth to 3rd world nations......make everyone "equal" , but equally poor in the long term. They have systematically destroyed the traditional conservative party from within, Bishop has squandered a stupid amount of taxpayers money overseas when our farmers are suffering from drought locally......they are moles put in place by the Left to destroy the party.

3. People are waking up to the UN sponsored left leaning open border policies and the attempt at grabbing Australias sovereignty and control of its borders. Having seen the mess that Left leaning governments have caused in Europe, Australians do not want that.

The unfortunate thing is that there is no strong, intelligent and pragmatic Conservative leader that can unit all conservative support behind them at the moment.....the risk is, that Bull #ten is hiding in his hole, avoiding media and shutting his mouth and doing absolutely nothing in the hopes that he will just walk into the Lodge as the Liberals self implode....and the media supports his aim and want for the top job and have for a long time....but the people distrust him with a vengeance.

Australia will be seriously stuffed should Labor get in with Bull #ten as leader in the top job with a Green left coalition.....and | fear for the future of our country as well as its security should that happen.

Not everyone will agree with my analysis or opinion....but I feel that Australia has, for a while now, been a testing ground somewhat for UN socialists policies......but tis all coming to a head now....and we, as conservative Australians either make a move now to regain proper control of our future, or we can sign it all away with little hope of regaining our freedom longterm.
edit on 21/8/18 by Melbourne_Militia because: (no reason given)

Duttons agenda is very much to the NWO, the globalists, call em what you like.

Dutton is bad, bad news for people on pensions and the dole. ( buy the way, work for the dole is civil conscription which is not permitted by the Aus constitution - read Section 51 XXIV i think it is.

Read something about recently but cant remember what it was. All I remember is that its bad, bad, bad.

I think he was the bloke to sold Darwin harbour to ???? for xyz Million and was immediately appointed the buyer boad of directors.

These people have NO Right to see our assets. Australian Assets belong to the people, not xyz govt. They are using our common wealth for their own enrichment.

AUGUST 22, 20188:48AM
MALCOLM Turnbull has picked up senior Liberal support against Peter Dutton, his deputy Foreign Minister Julie Bishop said today. Ms Bishop said a number of ministers who had offered their resignations after voting against Mr Turnbull on Tuesday were now backing him.

This clashes with rival calculations that Peter Dutton has picked up enough party room votes to become Prime Minister should he enter a second ballot. And Ms Bishop denied reports she had threatened to quit politics should Mr Dutton be elevated. “No that’s not true. I’ve never made that threat to anyone,” she told ABC radio. “I’m determined to work with Malcolm Turnbull to heal the divisions within the party and to unite the party so we can get on and deliver good government to the people of Australia.” Last night saw serial resignations of front benchers who told Mr Turnbull they had backed Mr Dutton.

This morning, Sky News reported that Citizenship Minister Alan Tudge also offered his resignation to the PM, but it wasn’t accepted. A group of ministers offered their resignations to the Prime Minister, but it’s understood Mr Turnbull is not accepting them. Eight members — not including Mr Dutton himself — announced their intention to resign their ministerial positions:

Thats the beauty of Australian politics - we vote for members and they get to pick or kick out their leader ie the PM.
Nothing dark about it.

My main concern was the eligibility of those who had to fight for survival through the High Court.
As if they didn't know there was that grey area of dual citizenship.

They covered for each other

I think our electricity is expensive not so much because of the emissions blah blah, but for the fact that whenever they've privatized any Government utilities the prices are jacked up so high.

The taxpayer has never had a good deal. All the infrastructure that we've paid for in the past is flogged off cheap and they get to cream us.

Dutton will be defeated by Shorten in the election

Shorten will be ousted by Albanese..

And Albanese is the best man for the job.

originally posted by: Agit8dChop
So odds on that by 5pm today Australia will have a new Prime Minister.

Dutton will be defeated by Shorten in the election

Shorten will be ousted by Albanese..

And Albanese is the best man for the job.


Love this. Meanwhile Gillard is Crocheting a new cardigan for Shorten. Albanese is testing out his new turntable and will hold a 'doof' party on the lawns of parliament.

posted on Aug, 22 2018 @ 08:44 PM
link
It seems like the liberals are imploding, they are talking that Morrison has tossed his hat in to the ring as well. What kind of vote is the party room gonna have?

- Australia's government is vacant, our PM, Deputy and Front benches haven't even rocked up for work in parliament 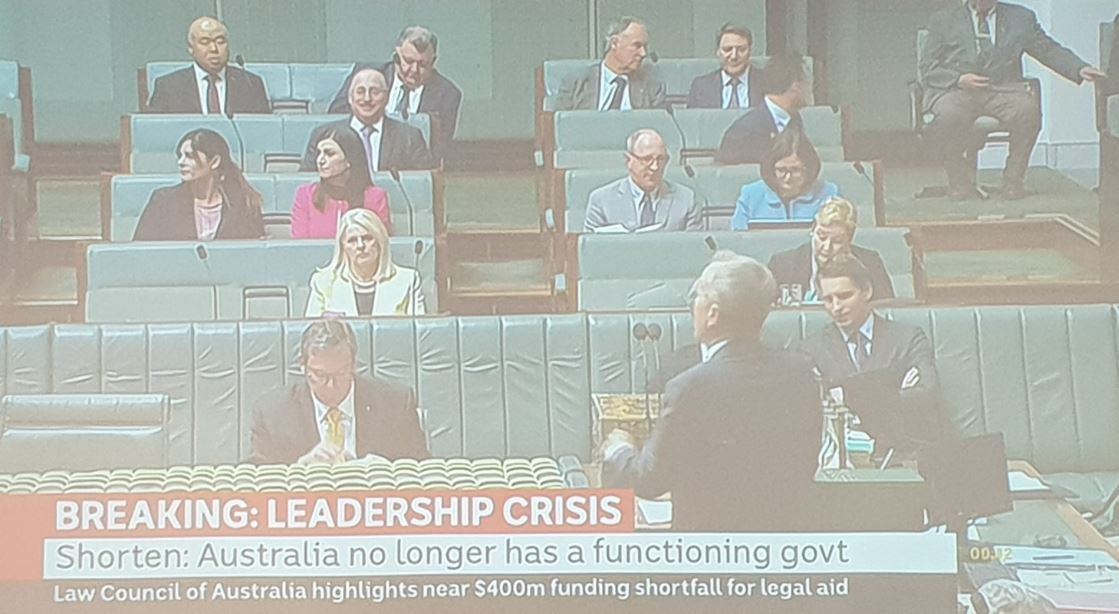 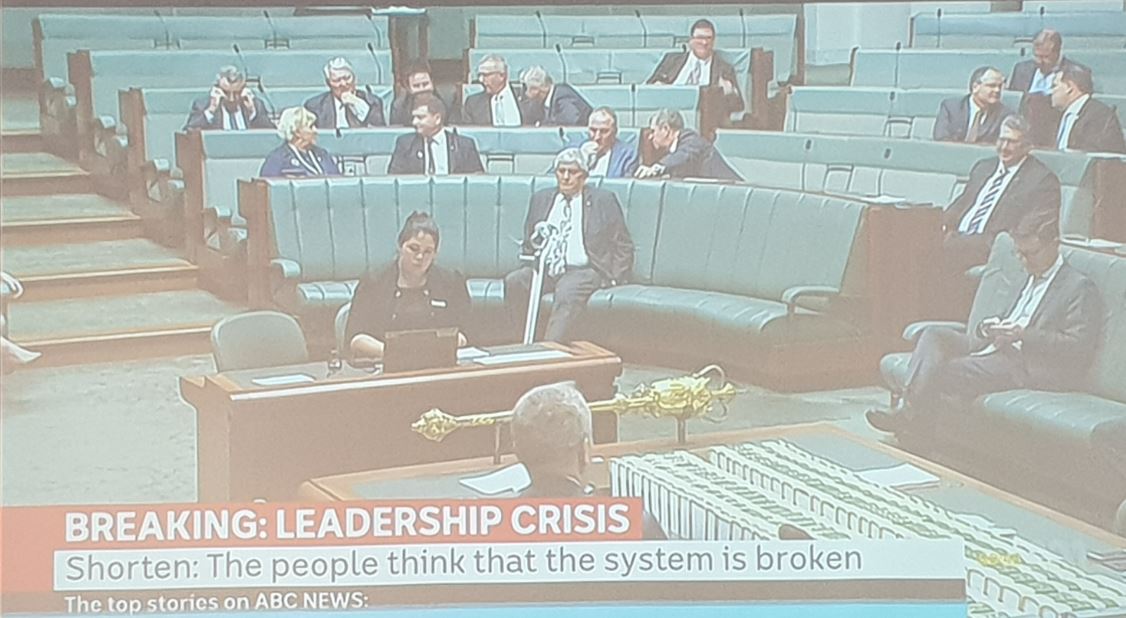 All those empty seats. thats our leadership!